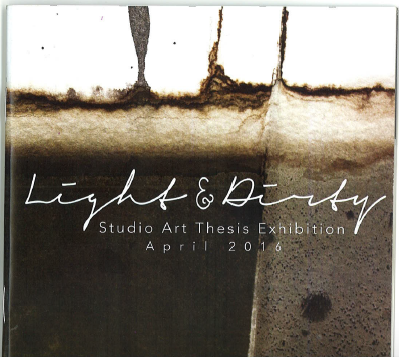 Light & Dirty, a senior thesis exhibition at the Weisman Museum, is showing a handful of art pieces, all of which aim to convey and start a dialogue about topics of “light” or “dirty” nature, senior Studio Art major Lydia Gerard said.

As far as the art faculty’s role in the senior exhibit production process, it is “truly in the hands of the students,” Batcheller wrote in an email.

I strongly believe that understanding who we are as a heterogeneous whole ­and individuals within that whole ­directly relates to an individual’s ability to research, formulate, execute and speak confidently about their own work and the work of others,” Batcheller wrote. “This understanding provides a foundation from which all other aspects of studio practice can be cultivated and taught, which in turn strengthens and re-informs the collective whole.”

They did not name it “The Repressionists” because the title did not apply to some of the artwork, Hartmann wrote.

Hartmann and Long collaborated on a piece titled “Profile Photo with Orphan.” The painting means far more than what meets the eye, Hartmann and Long said, with its “slap-dash” style, “weird” colors, “strange lighting” and essentially “sloppy techniques,” which convey a message far more important than the aesthetic appeal. The piece expresses contrasts between a “privileged culture, the stereotype of women — that none of us like — and the dynamic of power,” Hartmann said. 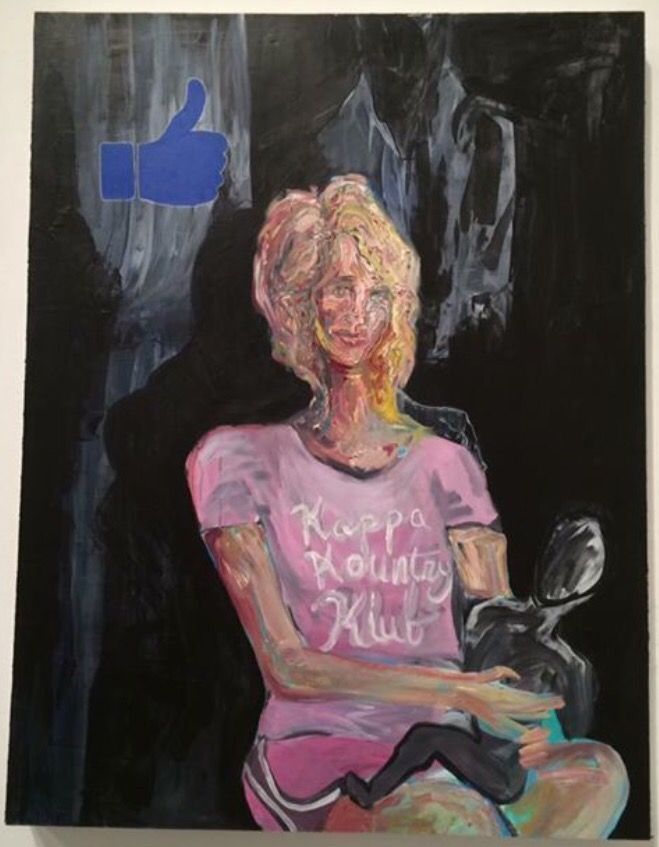 In reference to the photographed piece above, Hartmann said: “I don’t think that unsettling nature — [the] ugliness — of that matter is how we judge the value of this piece; the value of this piece is being determined now, in the value of the conversations that we have around it. I wanted to incorporate the idea of feminism, and how women interact with this, and how men impart their own values onto women; I didn’t ever want to blame this on women — I still don’t think the piece blames it on women — and by centering it onto the Greek system, that is one very clear symbol of how we transport and impose values on our culture.”

“We can’t swear off a responsibility of the Kappa Kountry Klub [banner] happening just because it happened years ago, [because] there’s a continued association, and those that have joined Kappa have taken on that association, whether they realize it or not,” Hartmann said. “Ultimately this boils down to the central problem of the piece, which is, ‘How much responsibility do we have over that image?'”

The alliteration of “KKK” and the “troubles of that” have been “a part of Kappa for the longest time.” Saturday Night Live brought this “troublesome” issue up in the 1970s and Mad TV has created sketches about it, Hartmann said. 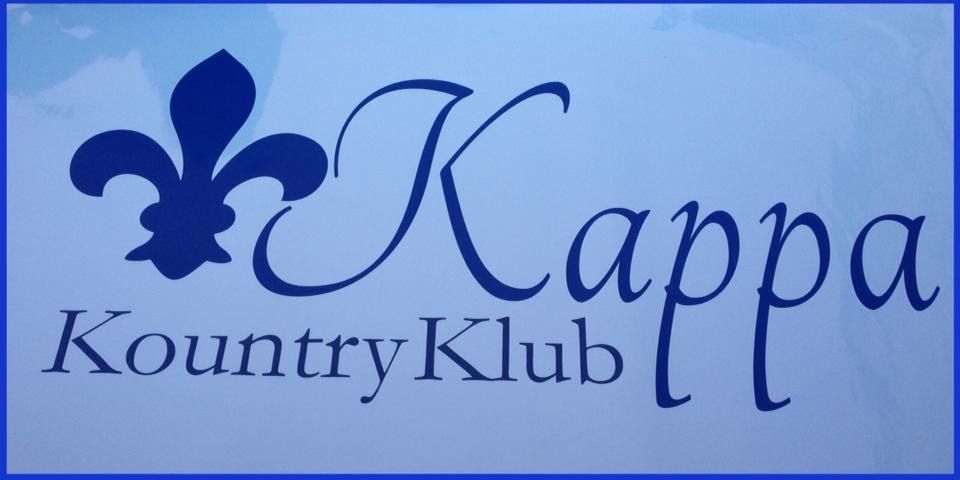 Despite this “troubling” topic’s presence in “the popular media,” Kappa — in 2013 — still “deliberately changed” ‘country’ and ‘club’ to K’s, Hartmann said.

Hartmann recognizes that the Kappas responsible for the banner that alliterated “KKK” are not current Kappa affiliates.

“If [the Kappas] don’t know that the Kappa Kountry Klub happened, why don’t they know about this?” Hartmann said. “Is that onus on Pepperdine as a whole, as a community to deal with, or is that an onus on Kappa specifically to recognize their history and educate new members that this is something that happened in the past?”

However, the artists intended to talk about the “issues” surrounding this piece that are “beyond Kappa,” Hartmann said. Long said this piece communicated a message that is “a lot bigger than just Kappa.”

“That was my biggest critique: that I don’t want this piece just to be about Kappa, because it’s so much bigger than that,” Long said. “But we used this as a stepping stone to realize it’s not just an individual; it’s bigger than Kappa. We’re critiquing ourselves and our own white privilege, and it made a lot of people uncomfortable, but in a good way I think.”

At both the regional and Pepperdine chapter levels, Kappa members were prohibited from commenting on this matter, while Kappa Nationals declined to comment.

Long and Hartmann’s piece was among many other provocative art pieces, all of which have various meanings; those ‘meanings’ are written in each of the artist’s ‘artist statement’ that hangs next to each piece in the Weisman.

“Art is an intellectual pursuit, and the academic environment offers a unique opportunity to understand, explore, and question this pursuit through discussion, feedback, trial and error and hands-on experiences,” Batcheller wrote in an email.

Gerard said all the pieces on display are centered around the idea of “purity” and how it’s often “distorted” by “human flaw.” She said her art comes from negative experiences with her faith. 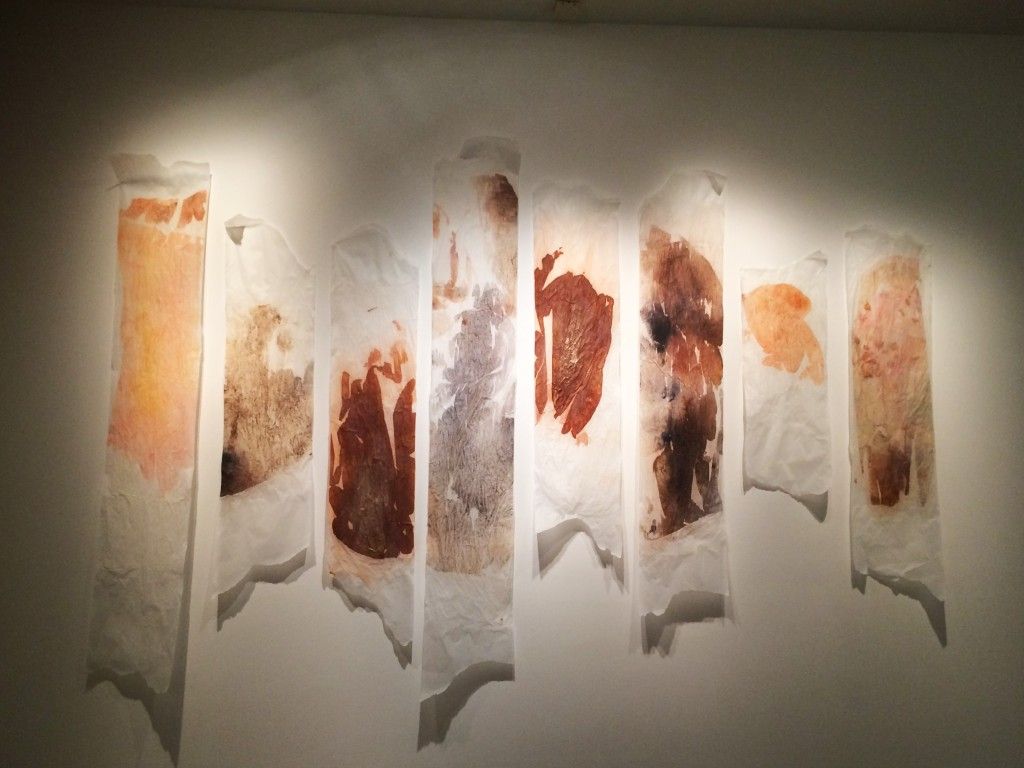 “How the Church Should Feel,” is the title of Gerard’s piece above, and it’s about how Gerard “thinks” the church should feel, specifically the Church of Christ which puts great “value” on the “purity of the mind and body,” Gerard wrote in an email.

“I experienced pressure in my religious community while growing up — to stifle and be ashamed of my sexuality because things having to do with sex were ‘impure’,” Gerard wrote. “This shame over human impurity, I believe, can become a roadblock to true communion with God.”

Gerard’s pieces, particularly those that were not chosen for display in the senior exhibit this year, were difficult to look at, so much so that half of the art students in her thesis art class wouldn’t even look at her work, Cary said. This response from Gerard’s classmates was a “great reaction to get as an artist,” Gerard said.

Cary has her art on display as well — various pieces of nude figure art — which she was expecting to receive “push-back” for but has yet to receive any.

In the past, nude figure drawing has not been allowed at Pepperdine and is still not a course the art program offers, according to Batcheller. Professors are “allowed” to hire models, but they are “clothed.”

In the art world, nude figure drawing is one of the first classes you take, Gerard said. This is because a figure is much more difficult to draw with clothes if you don’t know the appearance of the figure underneath, Cary and Gerard agreed.

Cary and Gerard said they have had a trouble applying to graduate programs because they have not completed nude figure drawing courses.

Cary said she experienced these challenges when she applied to a master’s program for Studio Art in Chicago. Because she has not taken a nude figure drawing class at Pepperdine, instead of putting Cary in their master’s program, they had to put her in the bachelor’s program instead so that she could fulfill the necessary requirements that Pepperdine doesn’t offer, Cary said.

However, Cary still learned the skills required for nude figure drawing on her own, deeming her nude figure art on display “experimental” work. She clarified that her work was in no way an “attack on the institution [Pepperdine],” as faculty we’re very supportive of Cary’s thesis, but a “critique” to “start dialogue,” which she said is displayed in her various artist statements.

“I was working with themes of anxiety, depression and sexual guilt, or being shamed over sexual feelings,” Cary said. “There’s a lot of content going into everything I was doing.”

Cary “couldn’t think of” an artist statement for her work — a general introduction to the artist’s piece — until a friend asked her what she was working on and Cary responded by sending her friend the photo below. Her friend didn’t respond for a day or so because she was “shocked” that she “would paint that,” Cary said.

“So, that whole day — Easter Sunday — I was writing back and forth [texting and emailing] with [my friend] about why I believe that nudity should be allowed in art, and why it’s not a taboo; that’s what I ended up doing for my artist statement,” Cary said. “I made a [small] label taken from the emails and the texts [between me and my friend, and used them] for my each of the paintings.”

In one of Cary’s email responses, she wrote about the idea of “Repressionism” and how it alludes to various themes incorporated in Cary’s nude figure artwork. A portion of the email reads as follows:

“I’ve spent my whole life feeling ashamed and guilty for having sexual feelings or being attracted to men, but painting is this place where it doesn’t matter because artists are encouraged to break social rules. In a painting, it’s OK for me to be attracted to someone, [and] it’s OK for me to talk about anxiety and depression — I’m going to have sexual desires, because most people do, and there’s nothing wrong with that.”