Pepperdine School of Law was unranked from the top law schools by the U.S. News & World Report for 2019 due to a reporting error.

The U.S. News & World Report releases an annual law school ranking consisting of several measurements, including the median LSAT score. Pepperdine School of Law reported an average score of 162 (when it was actually 160) and corrected their error immediately after taking notice, Dean Paul Caron said in a phone interview.

“All law schools got an advanced look at the rankings last Tuesday,” Caron said. “We were checking to make sure everything was correct and when we saw this mistake, we immediately contacted the U.S. News and informed them of it. We assumed because they sent it to us a week ahead of time, we could correct any mistakes if there were any. They have a corporate policy that they don’t correct mistakes.”

The initial ranking had Pepperdine moving up from No. 71 to No. 59. Law school ranking experts said Pepperdine School of Law would have still moved up the rankings to 62 or 64, had U.S. News recorded the rankings with the correct LSAT median, Caron wrote in a statement on his blog, TaxProf Blog.

Currently, there is a hole where Pepperdine was originally ranked on the U.S. News & World Report for 2019 list.

Students said the law school would be most negatively affected when it came to incoming applicants. Elizabeth Evashwick, a third-year law student, said she used the rankings as a way to choose a university.

“People in undergrad use the ranking as a guide to select their law schools,” Evashwick said. “I know I used U.S. News rankings as a way to pick what schools I was going to apply to.”

Second-year student, Tim Forero, also spoke of using the rankings as a guideline. He said the mistake could affect the university when it comes to applicants, possibly for the next two years.

“Overall, this could have a couple years of effect because I know a big strategy for the school to improve their ranking was to recruit the most qualified students that they could,” Forero said. “When I was going through applying to a law school, one of the first things you look at is the ranking. It’s going to hurt us in being able to attract the most competitive students we can.”

Other students were not troubled by the mistake. A first-year student, Taylor Porter, said the unranking was not a major concern.

“I don’t care too much about it,” Porter said. “It’s only for a year, so it doesn’t impact us that much, and it doesn’t affect the quality of education we’re receiving.”

Other students said the error could be a concern for out-of-state job prospects. For students not looking in the Southern California market, the unranking could have an effect, Forero said.

“Pepperdine has a good reputation and good alumni network here in Southern California,” Forero said. “But, I’m from New Jersey. If I want to go back home and work, and the employer’s not familiar with the school, they could look up how credible the school is and see something like that. It has the potential to be a negative impact.”

Caron said he is working with the university to create materials to provide to prospective employers and applicants.

“We’re hard at work developing material explaining all of this to give to anyone who asks,” Caron said. “Those materials show where Pepperdine is actually ranked this year, even though they are not in the official version. It’s an extra hurdle in which we have to explain the actual facts, because the actual facts are very good.”

Of those materials, Caron said he would include University of Tennessee Professor Bradley Areheart’s law school ratings of university averages from the past 10 years. Pepperdine is ranked 57.

The incident has stirred conversation among several professors and deans. The dean at Brooklyn Law School, Nick Allard, wrote on TaxProfBlog that he is certain this will end up helping Pepperdine because of the attention.

“I believe it is likely that circumstances will in the end call more attention than otherwise would have been paid to Pepperdine’s high standing and that it would have moved up in the rankings if it had been ranked this year,” Allard wrote. “Further, Pepperdine’s reputation should be justifiably enhanced due to its initiative in attempting to correct an inadvertent error that was to its own advantage.”

When it Rains Los Angeles is Floored 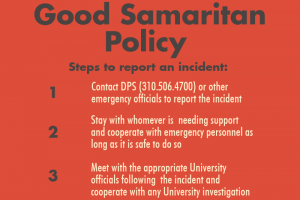