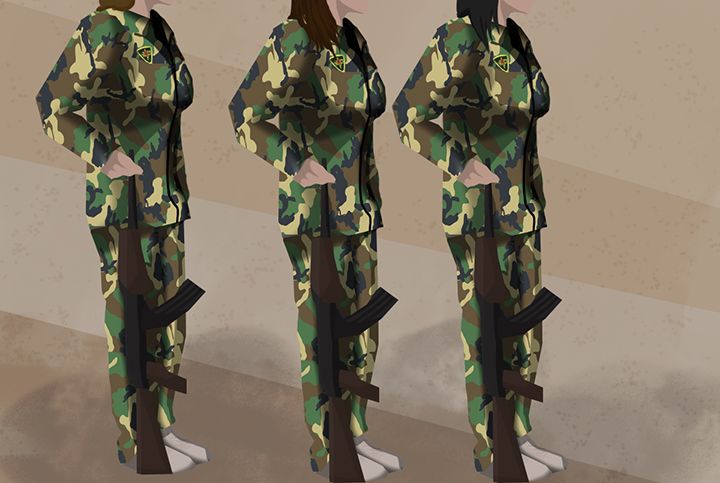 Their culture is one that most Westerners perceive as valuing conservative, subordinate women.

While this may be true of many places in the Middle East, Kurdish women have forged beyond boundaries placed on their gender.

These modern-day Joans of Arc are reshaping Middle Eastern culture through their resistance to the rampant destruction by the militants of IS (Islamic State in Iraq and Levant/Syria).

I think we rarely associate war with femininity, but these female fighters are an intensely inspiring group of women as well as some of the most deeply feminine.

When IS militants began overrunning Northern Iraq and Syria, the Kurds found themselves on the front lines of the struggle, being brutally persecuted by IS militants.

Captured women are treated brutally; often turned into sex slaves, tortured, raped and eventually either murdered or driven to suicide.

In a situation dire enough to cause all to cower and hide, thousands of courageous women have decided to do exactly the opposite.

In an interview with the International Business Times on Oct. 23, Kurdish female fighter stationed in Kobani, Syria, Bejan Ciyayi said, “I never liked war, but I have always been interested in those who have chosen to fight for freedom.”

Ciyayi continued, “Growing up, I wanted to be a writer; I would have liked there to be a world in which people never had to fight in order to express themselves. But this is not the world we live in … I have never wanted to kill any human being, but I know that if we don’t kill them, they will kill the children and rape the women.”

Driven by a sense of protectiveness and a certain nurturing quality, these warrior women are creating a disturbance in the agenda of IS unlike any other force involved in the resistance.

It is estimated that these female fighters make up about a third of Kurdish forces, and many of them are still just teenagers, according to the Sept. 5 British Broadcasting Corporation article, “The Kurdish female fighters bringing the fight to IS.”

These real-life Mulans believe so strongly in what they are fighting for. One part desperation, one part determination, producing complete inspiration — their efforts create an impact that is made simply through them being women.

In the previously mentioned article by the BBC, a 19-year-old female fighter called “Diren” said, “When they [IS] see a woman with a gun, they’re so afraid they begin to shake.”

To IS, a female fighter is considered “haram,” meaning forbidden. There are even some beliefs among IS militants that if they are killed by a woman they will not be allowed into heaven. However, Ciyayi thinks that IS’ fears have more to do with her comrades’ fierceness and courage.

She points out that along with the advantage that their presence has on the psyche of IS fighters, the Kurdish women are also very skilled in marksmanship — having been trained in a vast array of weaponry and showing particular skill with sniper rifles. “It requires calm, patience and finesse,” Ciyayi said, “Women excel at these.”

The female fighters have also been very successful at infiltrating enemy lines and are completely dedicated to their cause, one even going so far as committing a suicide attack on IS.

Ciyayi said suicide attacks are not approved methods of combat, but rather an individual’s choice to sacrifice themselves in defense of their people and to avoid capture by IS.

Despite being face-to-face with death on a daily basis, Ciyayi denies its power over her life. She said her desire for the victory of good over evil makes her feel invincible.

These female fighters are some of the most fiercely nurturing women I have read about.

They laugh in the face of death and glare fearlessly down the barrels of AK-47s into the yawning jaws of evil. They know the horrors they’d be subject to if they were captured by IS, but instead of seeking refuge, they have chosen to step out into the crossfire.

Ciyayi said she believes the female fighters’ sacrificial attitudes are what create a receptive atmosphere toward them among the Kurds. “There is a sincere love between us and our people. I can’t express this in words,” Ciyayi said.

These women recognize that the power they have as women in the situation with IS is a unique advantage.

Though they are in a context that has historically been reserved for men, they are proving themselves as incredibly useful assets both in skill and determination.

“The success of women in Kurdistan is the success of all women against the patriarchal system in the world, and this makes me very happy. In this sense, I am proud of all women. We even have female fighters from other countries,” Ciyayi said.

The Kurdish female fighters have inspired women all around the Middle East to become protectors of their peoples as well and have requested to be trained in the ways of war.

However, the female fighters make sure to encourage others that freedom is not achieved simply through military combat.

Follow the examples of these women fighting so fiercely for what they believe in and reshape the world, refusing to let opposition dissuade you no matter how evil.

These women have found that it is better to die for what is right rather than live in the presence of evil.

Find your weapon of choice: Pick up your pen, raise your voice, point to the truth, stand up and go.

The world needs more people who are passionate for the right things — for peace and love and life — and who are willing to sacrifice their lives in restoring those qualities to the world.