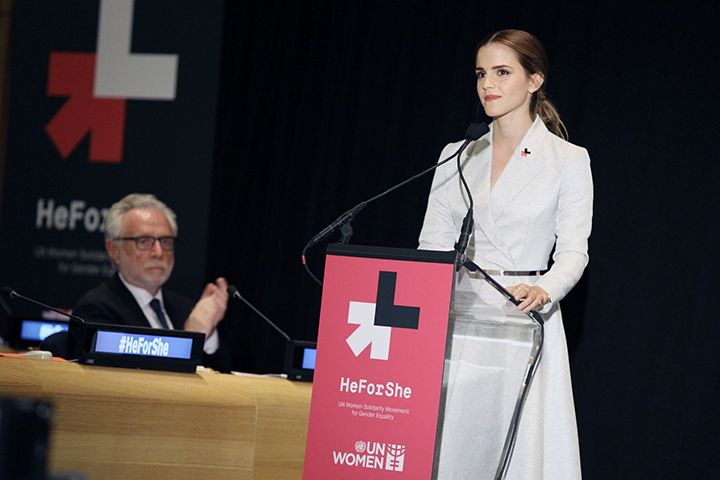 Emma Watson has blossomed from a saucy young witch to a passionate, mature feminist. Straight out of college, fresh into the real world, Watson is named a U.N. Goodwill Ambassador based off her power and passion for women’s rights.

On Sept. 20, in front of the entire U.N., Watson was very open with her views on feminism and gender equality. She said she believes that “feminism is often seen as ‘man-hating,’” according to both her speech, and the Washington Post in an article written on Sept. 22, and she said she wants to make it known that feminism is about gender equality, and not the degradation of men.

Essentially, in her activism of women’s rights, Watson wants to make women’s rights a thing of the past, because “women’s rights aren’t separate from human rights.” Watson’s opinions really came out this past week, when several big-name football stars, such as Ray Rice, were publicized for beating women or doing something of the like.

Instead of bashing the names of these men, Watson took action to use these events as a springboard for how she feels about women’s — no, human — rights in a compelling and insightful speech.

In her speech, Watson made many points about how feminism should be seen in our society. One of the most profound, however, is her action of inviting men into the ongoing conversation about women’s rights because, according to Watson, “gender equality is [their] issue, too.”

Watson’s essential goal of the speech was to push back on associations such as “Women Against Feminism” that portray being a feminist as automatically hating men.

But, as Watson points out in her speech, feminism is quite the opposite. “I think that it is right that, socially, I am afforded the same respect as men. But sadly, I can say that there is no country where all women can expect to receive these rights,” Watson said.

There it is. Emma Watson laying down the avoided truth in our society: Women are not equal to men anywhere. Watson’s ideas about how feminism should be prominent in our society is exactly what led her to receiving a lot of bad press for her speech.

In essence, this speech should be inspiring to the world, but instead, people who do not agree choose to attack her with just what she is speaking against: women’s rights to body image, privacy and speech.

Once Watson made her inspiring speech, in a world where many are already averse to the general ideas of feminism, she was faced with consequences and threats from many, rather than rewarded with praise and action.

According to a Huffington Post article published on Sept. 23, the young actress was threatened with nude photos of her being leaked by the same hacker who has leaked many other nude celebrity photos for saying what she felt.

Not cool, right? Hiding behind the computer screen and commenting without evident consequences makes those who disagree feel comfortable with saying how they feel.

What Watson speaks against is being pushed right back in her face. These cowardly threats are essentially a sign that men around the world wish to make her less powerful — essentially, they want to make her society’s ideal of a woman: that is, submissive, timid and second to men. Among other threats and negative feedback, Watson, in her very mature and worldly way, responded just so that she could prove her beliefs even more: “We don’t often talk about men being imprisoned by gender stereotypes, but I can see that they are, and that when they are free, things will change for women as a natural consequence,” Watson said. She uses the men who are threatening her to make yet another case for human rights, and how even men do not have gender equality.

Simply put, Watson’s refreshing take on women’s rights and human rights in general is extremely threatening and uncomfortable to men and women alike.

People need to start accepting change and new outlooks instead of being scared of them and shying away from confrontation. Emma Watson is the quintessential example of “today’s woman” who speaks her mind and does what is right without fearing the inescapable consequences. The moment society starts realizing that change is good will be the moment that our society will start making progress in human rights.