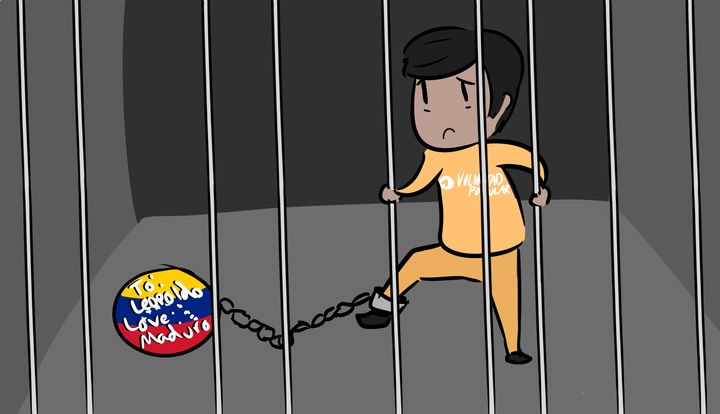 Leopoldo Lopez sent his daughter a message from his military prison cell on Sept. 19. The message was later shared by his wife on his Facebook account: “Today, my dear Manuela turns 5. I was able to see her, and for her birthday she asked me to carry her up to Avila [National Park in Venezuela], like we used to. I promised I would take her soon.”

Lopez has been imprisoned for seven months, defending his case against the Venezuelan government and currently facing 12 years of imprisonment for the charges held against him.

Manuela will be 17 when her father is finally able to fulfill his promise. I cannot help but wonder how old the daughters and sons of the remaining 69 political prisoners will be when their parents are finally released, too.

On Feb. 18, Lopez turned himself in to the National Guard after delivering a historic speech to thousands of Venezuelans in the city of Caracas.

In this speech — as well as in every other public proclamation he has delivered, first as a public official under President Hugo Chavez’ regime and later as the founder of the Public Will political party — Lopez calls the Venezuelan people to action, inciting non-violent protests and demonstrations to demand the democratic rights that Venezuelan dictator, President Nicolas Maduro, has taken away from the people.

Lopez is only one of the hundreds of political prisoners that Maduro and his infamous predecessor, Chavez, have detained during their so-called “Anti-Fascism” campaigns throughout their dictatorial regimes.

Since Lopez’ imprisonment, the Organization of American States, President Barack Obama, Amnesty International, the Human Rights Watch and, most recently, the United Nations have demanded his release.

On Oct. 20, the UN High Commissioner for Human Rights Zeid Ra’ad Al Hussein released a statement declaring, “The prolonged and arbitrary detention of political opponents and protestors in Venezuela is causing more and more concern internationally.”

Maduro still fails to respond to the numerous international requests for the liberation of the innocent protesters that were captured by the National Guard for publicly manifesting their concerns over the growing shortages of staple goods, the increasing rates of crime and citizen insecurity, unfair elections and the government’s invasive regulation of public speech and press.

Lopez was detained for expressing these concerns and pointing out the human rights violations that the Venezuelan people had endured under Maduro’s dictatorship. Since his detention, Lopez has suffered from inhumane, degrading and torturous treatment at the national penitentiary.

Jared Genser, Lopez’ international lawyer, explained in his formal letter of complaint to the United Nations on July 29 that Lopez had been subjected to “enforced, and arbitrary solitary confinement up to 23-24 hours a day, including a three-month period without natural light, which has damaged his eyes.” Genser also added that Lopez had “never been provided confidential attorney-client communication or private telephone calls.”

It breaks my heart to recognize the reality behind the system of justice in Venezuela which has been tainted with corruption and bribery since Chavez’ regime. Maduro’s government has continued the regime’s authoritative influence or — dare I say — control over all the governmental branches of power in the nation.

If there is anything I have learned about trials and rule of law, it is that witnesses are one of the most important resources that defendants have to present their case.

So, how could one possibly defend the legitimacy of a system of justice in which the judge allows the government to introduce more than 100 witnesses while approving only 2 of the 60 witnesses proposed by Lopez’ defense?

While Lopez’ innocence may seem obvious to the rest of us, it is something that the Venezuelan regime will not recognize.

To think that Lopez is only one example of many that have endured this injustice only inspires me to share his story and raise awareness about an issue that has been kept from the majority of the international community for far too long.

If anything, Lopez should be an inspiration and a hero to all of us. He has been an example of selfless dedication and commitment to the people of his nation and their human rights. Still, I wonder what strength has kept him going this long, amidst facing an injustice that will seemingly torture and silence his efforts for as long as it possibly can. But then I realize, was Nelson Mandela not imprisoned for 27 years before justice was finally achieved in his nation?

Surprisingly, I have garnered hope from Lopez and the letters he has hand-written from his tiny, secluded cell to share with his supporters. His letters and statements have been typed up and posted to the website that Lopez’ family and friends created in order to keep his supporters updated. The website, www.freeleopoldo.com, published a piece on Oct. 8, in which Lopez explains one of the things that has inspired him to deal with his situation every day that passes.

“I have found some inspiring examples in the actions of leaders who faced an unjust injustice in their countries, handing themselves in and challenging the system, precisely so that they could strip that system bare before the eyes of their compatriots and the world.”

Knowing that there are leaders like Lopez in the world who risk their own lives for the sake of others comforts me, not only as a global citizen but as a sister to Lopez, as a Latin American that has seen our countries struggle to bring our people forward since the time of the Spanish Conquest.

Lopez ended his letter by saying, “I am imprisoned physically, but not in my convictions, and I know that one day … I will leave in freedom and have even more strength than before to fight for change and for a clear democracy for Venezuela.”

I am sure his daughter, Manuela, will understand one day that her father’s actions are genuinely heroic and that no amount of years spent in the fight for freedom will ever be in vain.

Let every birthday be a reminder to Manuela of her father’s hope for freedom, and let every day be a reminder for the rest of us of our remarkable blessing of living in a nation where our loved ones and our freedom are not stripped or crippled by the shadows of injustice.