As a result of the spreading coronavirus, Pepperdine students studying abroad in London, Lausanne and Heidelberg are being asked to stay put.

An email sent Wednesday night to students in the three programs explained that students will remain in their host cities, ceasing all outside travel. In a separate email to the Washington, D.C., program, the office informed participants that their Educational Field Trip (EFT) to Spain, previously scheduled for this weekend, is now canceled.

In an additional email to the entire Pepperdine community, the Public Relations Office wrote that the university will decide in the coming weeks whether to resume operations in Florence this summer. The email also stated there are no changes to any of the other abroad summer programs.

Brian Swartz, the D.C. program director, said the program’s priority is to ensure that the students feel supported. The program’s decision to cancel the EFT was in line with other universities’ travel cancelations abroad. As for what will replace the EFT, Swartz said they are considering local options or allowing students to travel elsewhere.

Junior Shaeli Funk, who is in D.C. this semester, said she was shocked to hear that the outbreak would be affecting her program as well.

“It’s obviously very weird, especially because we were supposed to be leaving 48 hours from now to go to Spain,” Funk said. “Suddenly [it’s] like, ‘Oh, that’s not happening, and the reason it’s not happening is [because of] the coronavirus — this global thing that’s going crazy,’”

Funk said she sympathizes with the Florence program, citing feelings of fear and shock that students and their family members must be experiencing.

“Abroad is such a central part of the Pepperdine experience for a lot of people — it’s highly marketed, it’s one of the reasons I chose Pepperdine,” Funk said. “So to have that taken away [from them] is kind of a blow.”

International Programs has not put any restrictions on the Buenos Aires (BA) program related to the virus. When Public Relations sent the Florence suspension email, BA sophomore Jacob Resendiz read it while studying with classmates.

“We were all kind of surprised and kind of shocked,” Resendiz said. “I think it kind of fell off our radars. We just figured that Shanghai would be the only program [to be canceled].”

“Especially after last year with the Borderline [Shooting] and the [Woolsey] Fire, this year to have [tragedy] hit them again, there’s a lot of uncertainty going on,” Wong said. “I feel so upset that they [have to] go through something like that again.”

Wong said she and other BA students talked about the coronavirus before they heard about Florence’s suspension.

“I think in the beginning, [there] was definitely disbelief that it was going to happen,” Wong said.

Resendiz said the initial BA response also included the hope that the Argentinian program wouldn’t be the next one to be shut down.

“Some of us were reacting to the fact that Brazil has a confirmed case in Sao Paulo,” Resendiz said. “Many of the students just returned from traveling abroad in Rio de Janeiro.”

The coronavirus threat in Brazil is dwarfed by the threat in Italy, with only one confirmed case. Even though Wong said BA students are not taking the threat of the virus spreading into Argentina too seriously, she does not think that the students would be surprised if the virus reached them.

Sophomore Katie Kennedy woke up Thursday morning to one of her roommates reading the International Programs email about Florence’s closure. She said the roommate apologized for waking her up, but the news was too shocking to keep to herself.

“It’s insane to me that this is happening,” Kennedy said. “When Shanghai was sent home, that was even really surprising, and they were in China, where it’s really, really severe.”

Kennedy said Heidelberg students always had the thought of another suspension in the back of their minds but saw it as a slight possibility.

“Last week, when it got really bad in Italy, was when we started to [think], ‘Oh, maybe this is a little more serious than we thought,” Kennedy said.

Kennedy cancelled plans to go to Florence this weekend. She said last week, she changed her destination to London, but with the travel ban, she will not be going anywhere.

“Realistically, it’s not going to get better by the time we come home,” Kennedy said. “They’re not going to have a vaccine for it for a while. I don’t see them lifting the travel ban.”

Sophomore Alicia Yu, who is in Lausanne, said she awoke to people yelling in the halls and reacting out of panic to the news in her house. Yu said many of the program members feel distressed because of having to cancel travel plans.

“To see that the rest of [the programs] were getting quarantined in our cities — it felt dramatic,” Yu said. “Especially how much we’re getting confined — we can’t even take the train five minutes away.”

Students in London could not be reached for interview before publication. 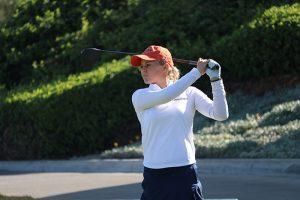 Megan Dennis is one of four international players on a six-woman golf roster. Photo courtesy of Pepperdine Athletics The...
Copyright 2013 Jupiter Premium Magazine Theme
Back to top