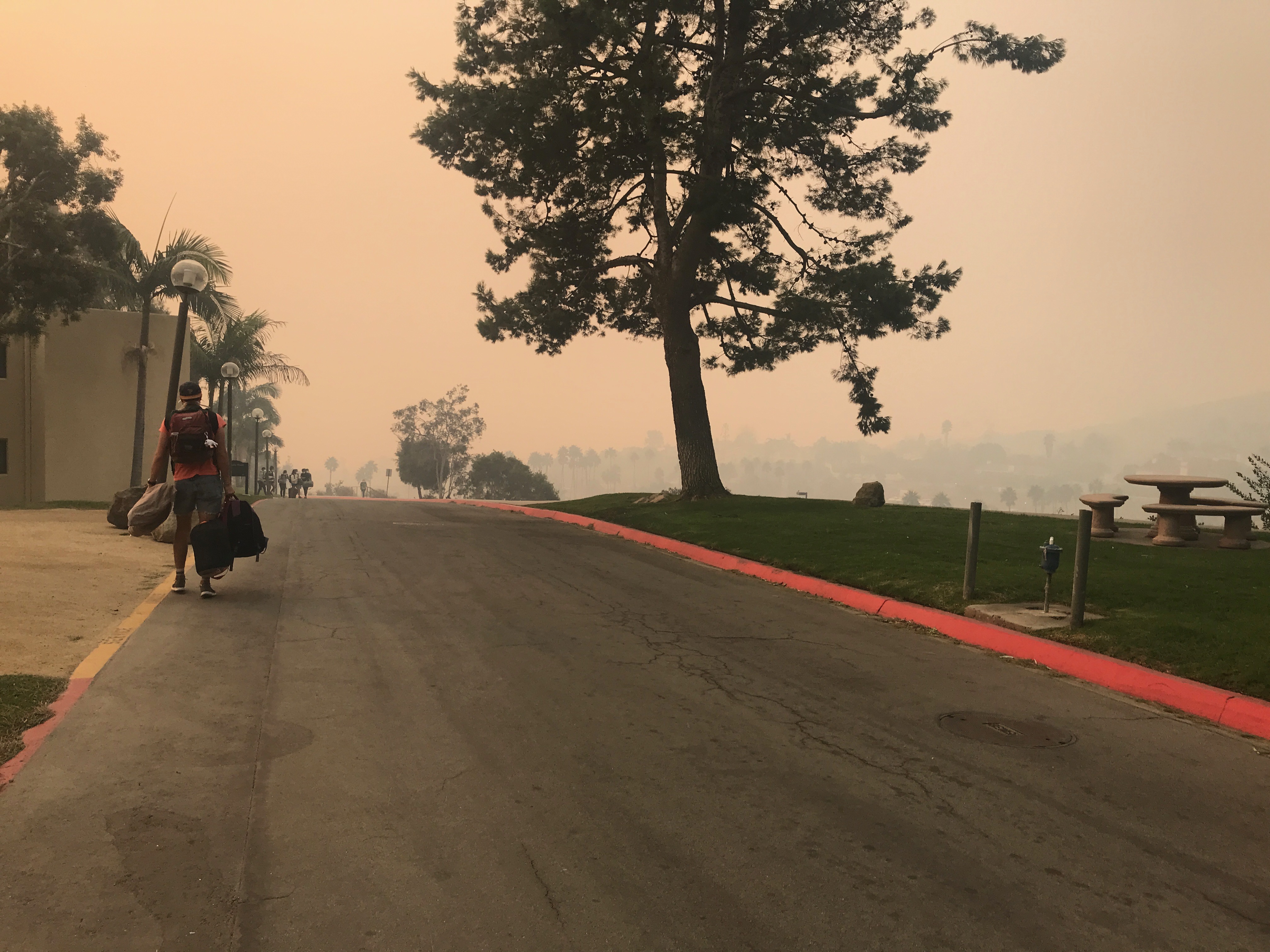 After the Woolsey Fire damaged and destroyed countless Malibu homes on Nov. 8, many Pepperdine students lost their off-campus housing and were forced to turn to Pepperdine Housing and Resident Life for help.

“I was not expecting anything to happen to the house,” senior Steve Kerr said about his off-campus house in a phone interview.

Even though many off-campus students said they did not anticipate that their housing would be affected, Director of Housing Operations Robin Gore said HRL was keenly aware of the possibility, even before the fire reached students’ homes.

As the fire was burning off-campus housing, HRL started making preparations for on-campus students as they corresponded with students whose homes might be in danger.

“Our interest in the fire began before the fire hit our campus,” Gore said.

Late in the night of Nov. 8, HRL began by sending an email to all residential students to ask if they would be willing to host an off-campus student who had to evacuate his or her home.

“We had way more people willing to take a student than we had need,” Gore said.

While the Student Care Team divided funds among the displaced students, HRL was able to house any student who needed a place to stay.

Senior Katelynn Quick saw her apartment complex burning on the news, so she immediately reached out to HRL. They quickly returned her email and confirmed that she and her roommates were on the list of displaced students, Quick said.

After seeing pictures that his neighbors took, Kerr said he saw his house had been “completely demolished.” Although these pictures gave him a sense of closure, he said he knew that he had to fully rely on Pepperdine to find housing for the rest of the semester.

While some of his roommates worried about Pepperdine’s capacity to take people in, Kerr said he “couldn’t imagine Pepperdine not doing something for their students.” After exchanging emails with representatives of HRL, Kerr was offered housing on the Drescher Campus.

Kerr said he struggled with HRL’s approach to the price of on-campus housing.

Because Drescher was double the rate he was paying for off-campus housing, this prompted Kerr to consider couch surfing.

After some time, HRL sent out an email explaining that they would cover the cost of the entire rest of the semester. Housing was then extended through finals week, Gore wrote.

“It definitely sounded like they were listening to their students,” Kerr said.

Quick said she was also offered housing in Drescher, but because of the increase in the cost of housing, budget was the most important factor. Pepperdine ended up helping her financially.

According to Gore, 40 of the students who were offered housing accepted the offer for at least a week.

Although Kerr said he was very grateful for the offer, he quickly saw “a little bit of miscommunication.” After returning from Thanksgiving break, Kerr arrived at his new housing only to find that there was already somebody living there. Kerr said his one critique for HRL would be to have given the on-campus residents a “heads up” about the incoming displaced students.

“The University reserves the right to change room or hall assignments, to assign roommates or fill vacancies within any on campus housing,” Gore wrote.

HRL’s priority was finding the displaced students a new home, not informing the residents of their new roommates, according to Gore.

Even though HRL was not required to contact the current residents, it seems as though they addressed this concern before spring semester began. Every student who had an open bed received an email in December saying that they should expect a roommate for spring 2019, Gore wrote.

In the end, Kerr decided to find other off-campus housing. He said he did not understand why the displaced students were being forced to pay the same amount that HRL was charging other students when they did not choose to live there. Also, he found it odd that they wanted to charge so much when the rooms would have probably remained empty if they had not been displaced.

Like Kerr, senior Sophie Flint said in a phone interview that the cost of on-campus housing was the “biggest factor” in deciding where to live. While trying to get help with housing cost from HRL, she felt “bounced around,” Flint said.

“As helpful as everyone was, it was still stressful with the deadlines and with on-campus housing costing so much more than what I was previously paying,” Flint said.

Instead of communicating with HRL directly during the process, Flint was able to speak to a Student Care Team member, which she said was very helpful.

“Some of the emails that I got were pretty indirect but when I worked through the Student Care Team I felt like I could communicate successfully,” Flint said.

Although she offered housing in Drescher, she ultimately decided to live off campus.

If a displaced student could prove that they found off-campus housing, Kerr said that the Student Care Team gave him or her $2,000 to put toward housing. It did not seem like much, but “a lot of students were just happy for it,” Kerr said.

HRL could not lower the cost of housing for the displaced students because the room rates are set by the University in advance, Gore wrote.

“All residential students are expected to pay the full rate for on-campus housing as decided upon for each residence hall room or apartment,” Gore wrote.

Similar to other displaced students, senior Bailee Blechschmidt was offered housing at Drescher after her Malibu home was devastated by the fire.

“While it’s certainly an unexpected change to be back on campus for my last semester, I am so grateful they found a room for me,” Blechschmidt wrote in an email.

“When I first found out about my apartment burning, I really had no idea what I was going to do for housing because I assumed there was no way they’d be able to house all of us displaced students,” Blechschmidt wrote. “I was honestly thinking I would need to drive my grandparents’ travel trailer down and find a place to park it and live in it for my remaining four months.”

Senior Rachel Packebush was very thankful for the help from HRL after losing her Malibu apartment to the fire.

“I think HRL was very on top of things and did a really good job with people who lost housing,” Packebush said in a phone interview.

Packebush and her three roommates were offered an apartment in Drescher.

“It was so incredibly kind that they allowed my three roommates and I to stay together,” Packebush said. “Having people and an organization and a team took off some of the weight of trying to find a new place to live. I am grateful that they had openings and that we had an organization to turn to.”