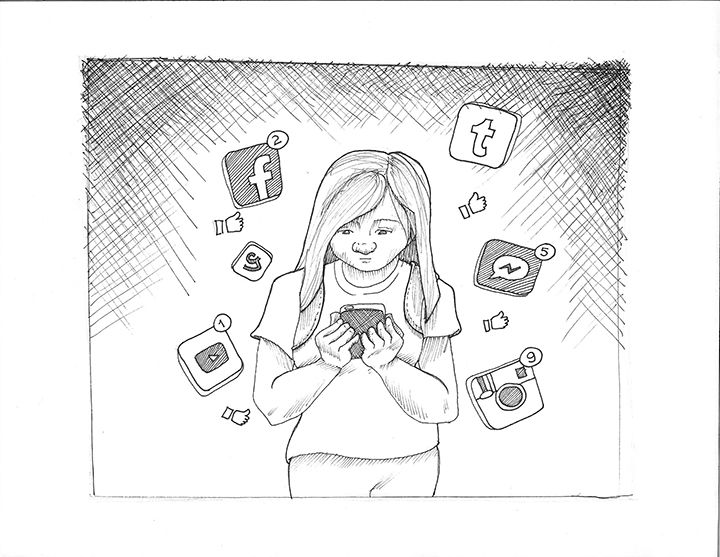 If I could rewind back to the first day of freshman year, I would tell myself to make the best of the situation by promoting real communication with others. I think we’ve all been struggling with some degree of homesickness, whether we miss our parents, our friends or even just the familiarity of our own rooms, but we’ve all learned how to adjust to our new lives. Unfortunately, our new lives are just a glorified continuation of highschool cattiness. This year has been fraught with drama, and I was hoping that by now, our generation would have matured more than it has. What I have come to realize, however, is that there is one thing that is holding our generation back from having real, meaningful relationships: technology.

Although this is a difficult thing to acknowledge, our dependence on technology in social situations leads to a lot of unnecessary social immaturity. We’re all guilty of whipping out our phones to avoid “awkward encounters,” such as waiting in line to get food when we’re by ourselves or running into someone we don’t know very well.

However, our cellphones have become shields from the world, and rather than engaging in the environment in which we are actually participating, I have come to see that many people are dependent on their phones, and I am slowly becoming more reliant on my phone as well.

I’m not saying that texting our parents or our best friends from home is a bad thing — I’m simply saying that certain filler activities are interrupting the time we spend with others, and I always feel hurt when I see others on their phones when I’m trying to talk to them. I am currently trying not to use my phone as much as I have been because I recognize that it’s causing a divide between my friends and me, and I only wish I would have done this sooner in the year.

Many of my close friends have created some of their strongest friendships through text; personally, I have only made one friendship through text, and it faltered after a few months. I’ve found that making friendships in person is much easier and much more meaningful, and I wish I could go back in time to make more friendships at the beginning of the year when we were all trying to get to know each other.

This crutch of the impersonal phone screen often allows people to say — or text — things that they would never dare to say in real life, causing a lot of unnecessary drama. I am always amazed at how quickly a piece of gossip will fly around my friend group, and I’ve been guilty of sharing the latest news via my phone as well because texting someone about what just happened is as quick as one finger press away. Although we should try to be on our best behavior when we use our phones, we are too impulsive and can text whatever we are thinking, often regretting it later. If I could, I would remind my former self to try to prevent any drama that could come from the use of my phone.

Relationships that are dependent on screens and the Internet are unhealthy, and they can often lead to some form of immaturity. So to all of the future freshmen, and to all classes, please, take your eyes off the screen and look up in order to form real friendships with the people around you.