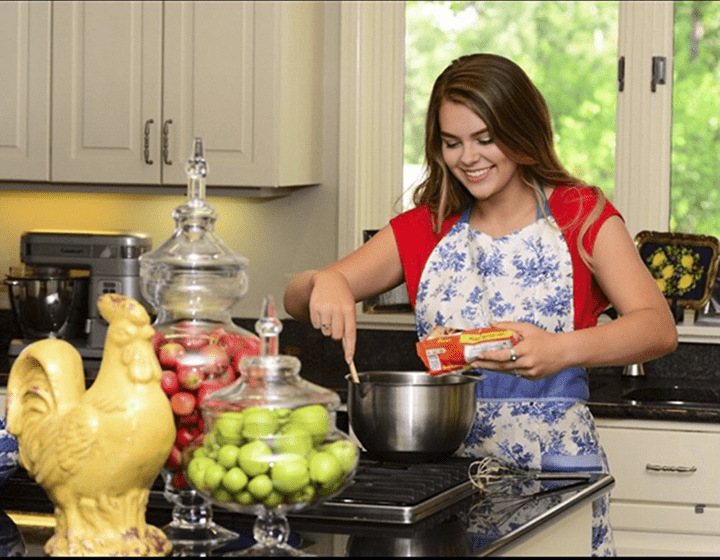 First-year Ellie Duvall bakes cookies in her home in Longview, Texas, in 2019. Duvall said she uses her kitchen in Drescher to hone her culinary skills.

The Longview, Texas native lives with her sister, senior Madeline Duvall who is a staff artist for the Graphic, in the Drescher Apartments on the Malibu campus. Equipped with her own kitchen for the first time, Ellie Duvall took up cooking — making everything from shrimp fried rice, lemon crostata and dumplings all from her dorm.

“Being responsible for my own apartment and for my own food, I feel like I’ve grown up a lot,” Duvall said. “Now that I live on my own, I can make anything I want.”

Duvall said she always had an interest in cooking growing up, but since moving into her own space in Drescher, she is able to advance her skills and experiment more with food.

Upon her arrival on campus, learning to cook more recipes felt necessary for Duvall as a way to connect with her sister and strengthen friendships. Duvall purposefully makes large portions of her food not only for leftovers, but also to deliver safely to friends.

“I want to do things for myself and my sister,” Duvall said. “Even though we’re tired, we’ll still make something that’s nice, and then it feels like a home-cooked meal. People like food, and I feel like it’s my way to make people feel welcome.”

Using Pinterest as her main source of recipe inspiration, Duvall and her sister find recipes that intrigue them and then go to Ralphs to buy the ingredients. Duvall said making bagels from scratch is one of her proudest culinary accomplishments.

“Most of the stuff I [cook] is just stuff that I’m like, ‘Hm, I really want this but I don’t want to go buy it, and instead, I’m going to make it,’” Duvall said. “Me and my sister never have nothing in the fridge. There’s always something I can eat.”

In high school, Duvall said she considered applying to culinary school rather than traditional colleges, but ultimately felt she belonged at Pepperdine because of her Church of Christ faith and familial connection to the school. Duvall grew up visiting the campus to see her older sister as well as her older brother, Ross, who graduated from Seaver College in May.

“I just wanted to go to a Christian college or place where I could practice my faith, and I would feel like other people around me were also practicing their faith,” Duvall said. “I’m happy that Pepperdine is like, ‘Yeah we’re a Church of Christ school. And we’re not ashamed of being Church of Christ.’”

Looking ahead, Duvall said she wants to add an Art minor to her IMC major, so she can pursue her love for painting and creating digital portraits. Duvall plans to spend her sophomore year in Germany with the Heidelberg program, where she hopes to reconnect with a German exchange student who lived with her family when Duvall was in sixth grade.

“Germany is so beautiful, especially Heidelberg,” Duvall said. “Europe as a whole is not doing super well with COVID right now, so I hope that if I get there, I’ll at least be able to just live in Germany. If I can’t travel a ton, I understand, but I just want to get there.”

Duvall said she wants to keep developing her cooking skills as a hobby, and she is grateful to have access to a kitchen her first year of college.

“I like the idea of having a kitchen, and I know that’s not really an option for most freshmen, but I strongly feel like it should be,” Duvall said. “I love to cook, and I think I would be so sad if I had to go down to the Caf every day.”