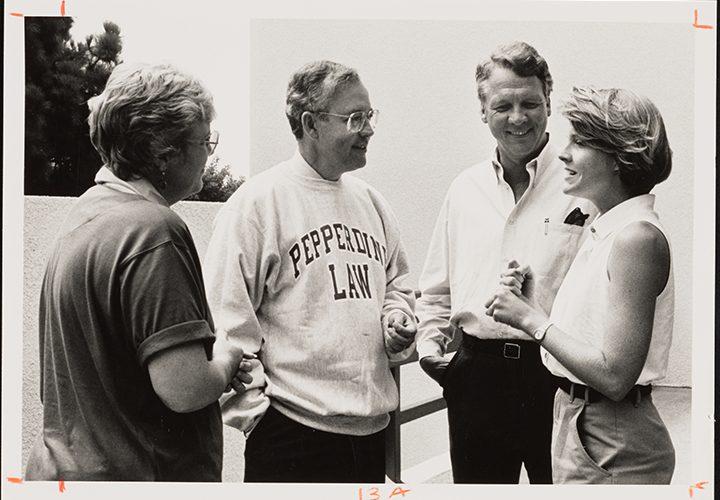 Kenneth Starr speaks with members of the Pepperdine community during his tenure as dean of Pepperdine Law School. Courtesy of Pepperdine Libraries Special Collections and Archives

As President Trump’s defense team presented their arguments to the Senate last week for the third impeachment trial in American history, one of those advocating for the President’s acquittal was once a Wave.

Kenneth Starr, dean of the Pepperdine Law School from 2004 to 2010, was appointed as independent counsel to President Trump’s legal team Jan. 17. Starr previously led the Whitewater investigation that resulted in the impeachment of Bill Clinton in 1998. 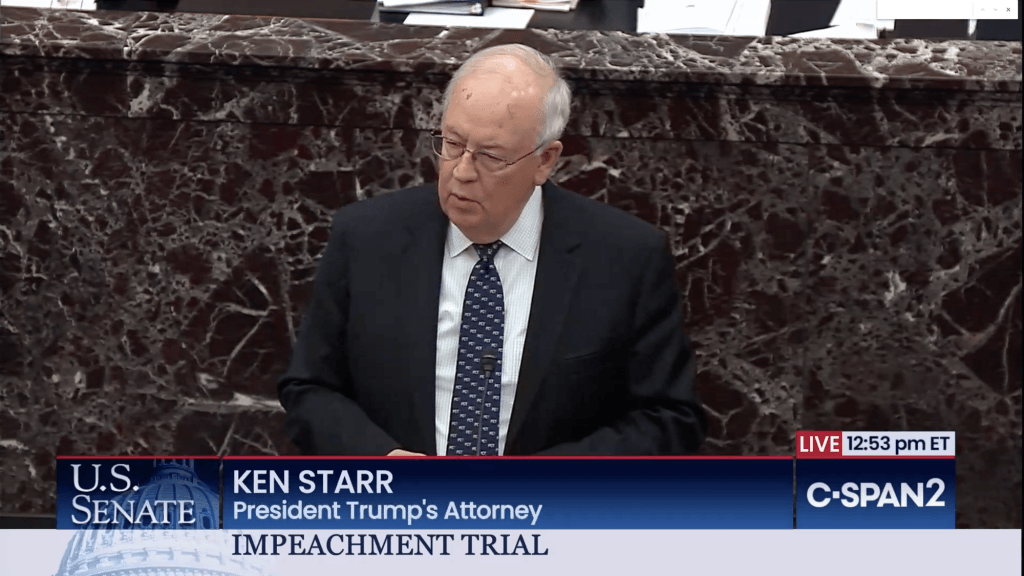 Attorney Kenneth Starr delivers his closing arguments in favor of acquittal to the Senate Feb. 3, the twelfth day of President Trump’s impeachment trial. Courtesy of C-SPAN

“It never surprises me where he pops up,” President Emeritus Andrew K. Benton said of Starr. “He’s a very smart and much sought-after guy.” 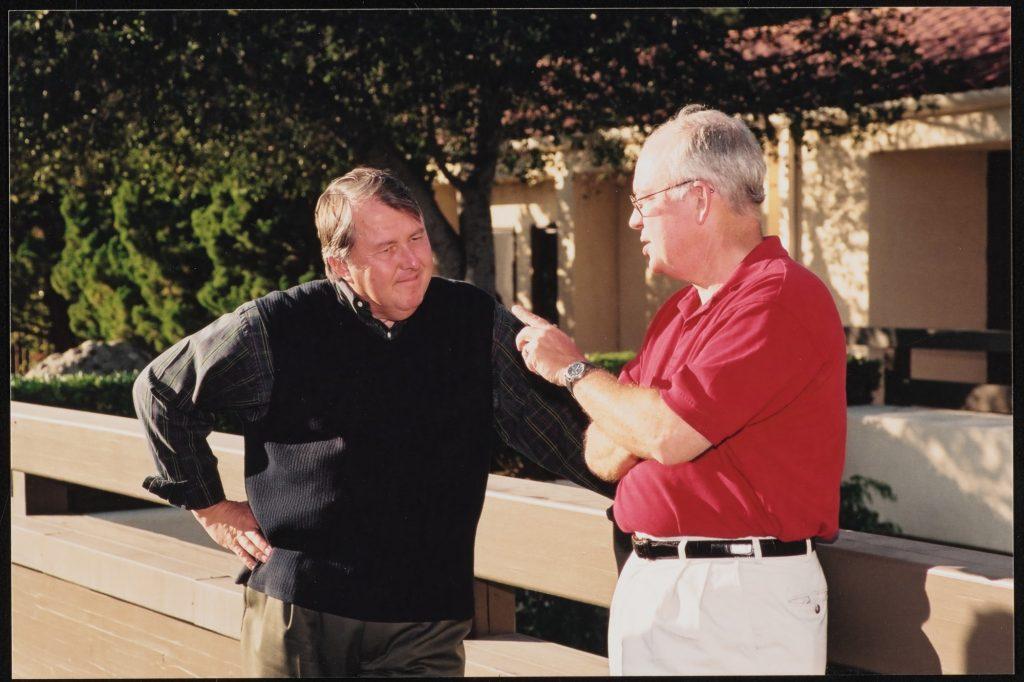 Prior to his deanship at Pepperdine, Starr served as U.S. Solicitor General under George H. W. Bush from 1989 to 1993, where he argued 25 cases before the Supreme Court. Starr joined Kirland & Ellis LLP in 1993 before taking over as independent counsel in the Whitewater investigation in 1994.

After three years of serving as the Whitewater prosecutor, Starr began talks with Pepperdine about becoming dean of the law school. The possibility of Starr leaving the high-profile investigation into President Clinton received national attention: The New York Times published a front page article in their Feb. 18, 1997 paper titled “Special Counsel Intends to Leave Whitewater Case.”

“Kenneth W. Starr, the Whitewater prosecutor, will step down by August to become the dean of the law and public policy schools of Pepperdine University in California,” the piece said. 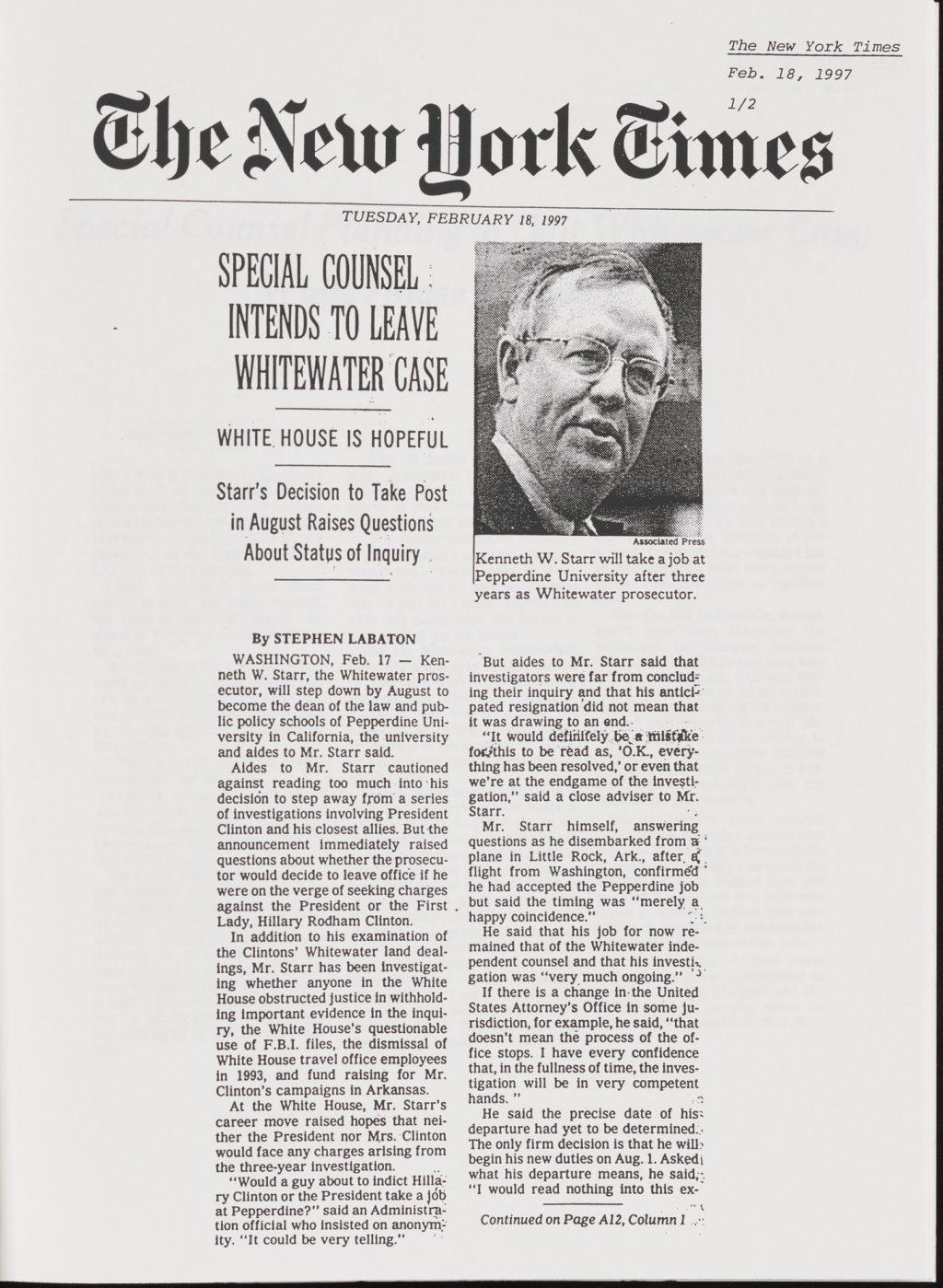 The Feb. 18, 1997 front-page article of The New York Times covering Starr’s decision to step down from Whitewater investigation to become dean of Pepperdine’s law and public policy schools. Courtesy of Pepperdine Libraries Special Collections and Archives

However, after the Pepperdine community waited more than a year for Starr to arrive, he turned down the deanship in April 1998, eight months before President Clinton’s impeachment.

“We selected him, and the faculty were delighted that he was coming, but he couldn’t walk away from [the investigation],” said Benton, who was then the university’s executive vice president. “I had to call him and just say, ‘We just can’t continue this — let’s agree that now is not a good time and hope that there will be a better time.’”

Starr announced his withdrawal in a letter to then-President David Davenport, according to a special edition of the Graphic on April 17, 1998.

“I had eagerly looked forward to spending many happy years at Pepperdine after completing my duties as independent counsel,” Starr wrote in the letter. “The work of that Office, however, has expanded considerably, and the end is not yet in sight.” 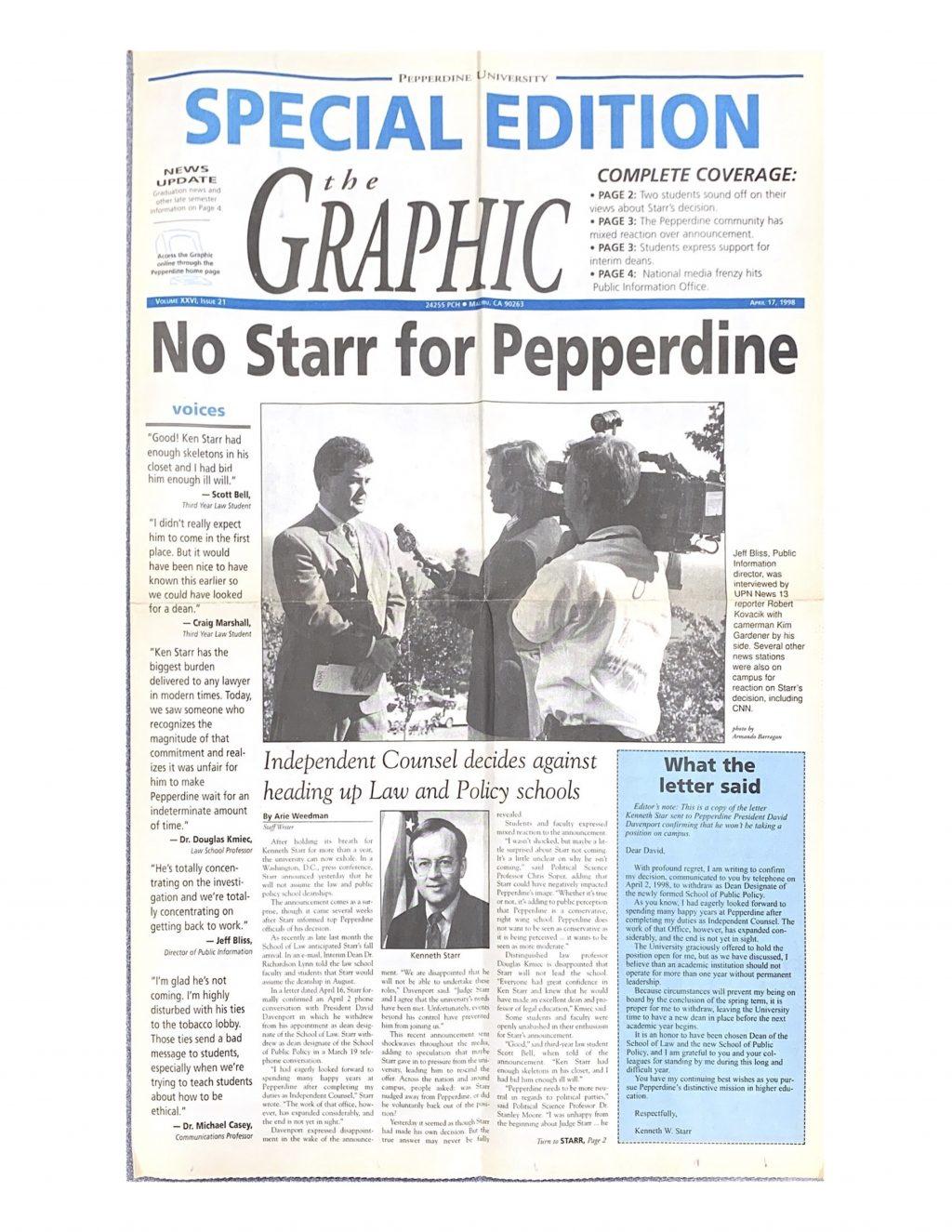 A better time came in 2004 when Starr was offered the role of dean of the Pepperdine School of Law again. Starr accepted and immediately brought visibility to the program with his extensive legal experience.

“If we needed to get a Supreme Court justice to come and speak or help us with a public event, he knew every member of the court and he was friendly with them,” Benton said. 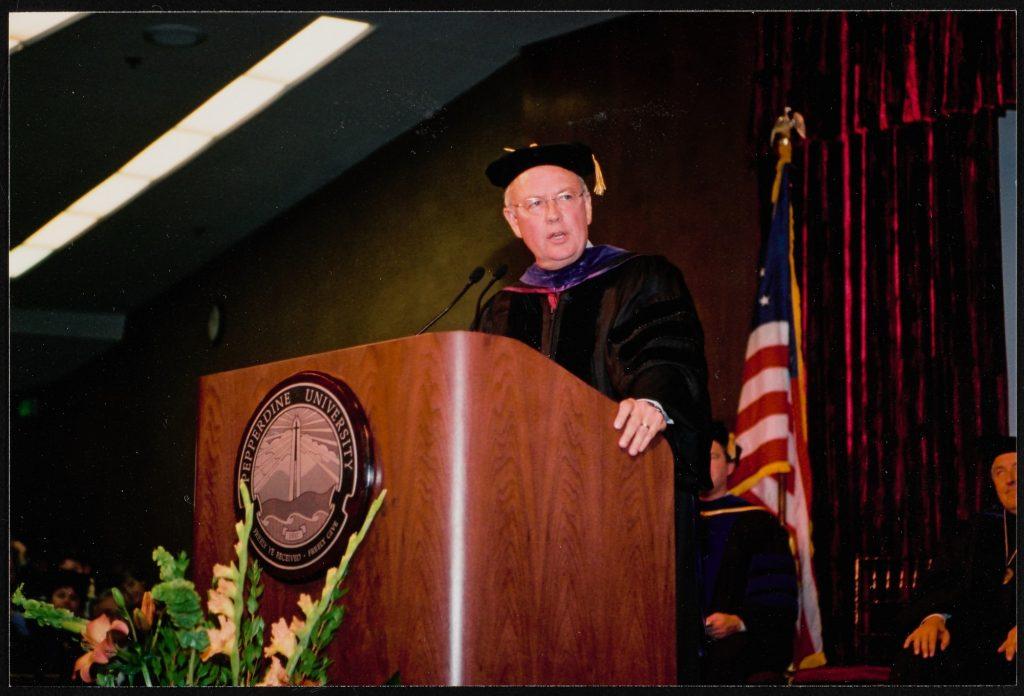 Then-Dean of Law Ken Starr speaks at the Pepperdine School of Law in 2004. Courtesy of Pepperdine Libraries Special Collections and Archives

At the time, Pepperdine Law ranked 99 in the nation. But by the time Starr left in 2010, the school had risen to 55 in the rankings, according to U.S. News and World Reports.

“He’s the one who put Pepperdine on the national stage,” current Pepperdine Caruso School of Law Dean Paul Caron said.

Tim Perrin, the university’s senior vice president for strategic implementation, worked closely with Starr at the law school as his vice dean. Perrin said Starr had a vision to make Pepperdine’s Law School the premiere Christian law school in the nation with a strategy Starr coined “the Path to Excellence.” 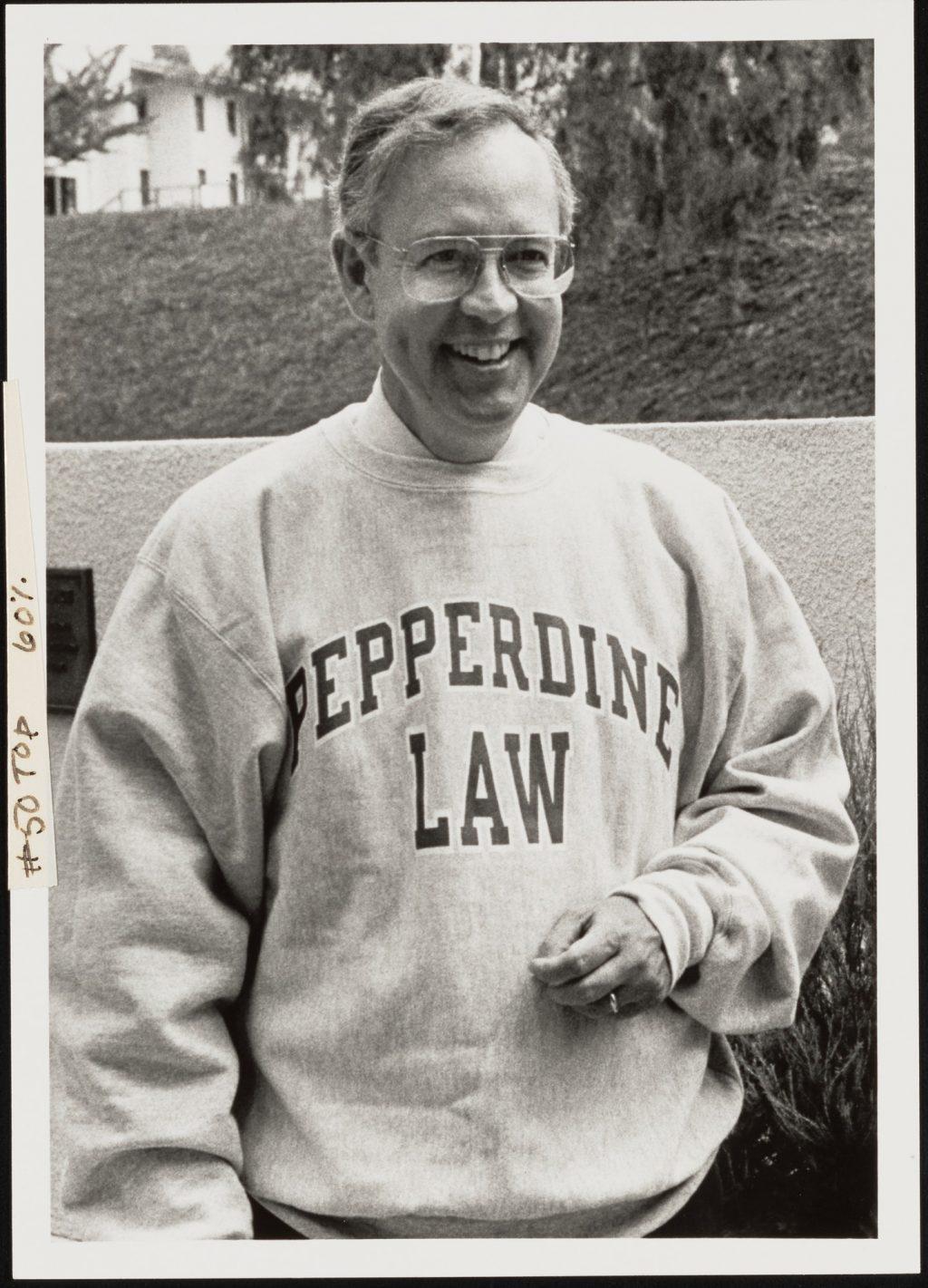 Starr sports a Pepperdine Law sweatshirt. Under Starr’s leadership, the Pepperdine Law program rose from 99 in the nation to 55. Courtesy of Pepperdine Libraries Special Collections and Archives

“[Starr] was a very student-focused dean,” Perrin said. “He worked hard to make sure that [students’] experience at Pepperdine was great, and he did that through programming and also just through his personal touch.”

Both Perrin and Benton said they remember Starr’s kindness as a hallmark of his leadership.

“He’s one of the kindest, gentlest and smartest human beings that I will ever know,” Benton said.

His appointment was not accepted by all, however; some faculty members were concerned about the reputation Starr brought to Pepperdine due to his previous work as independent counsel, according to a Graphic report from Aug. 30, 2004. 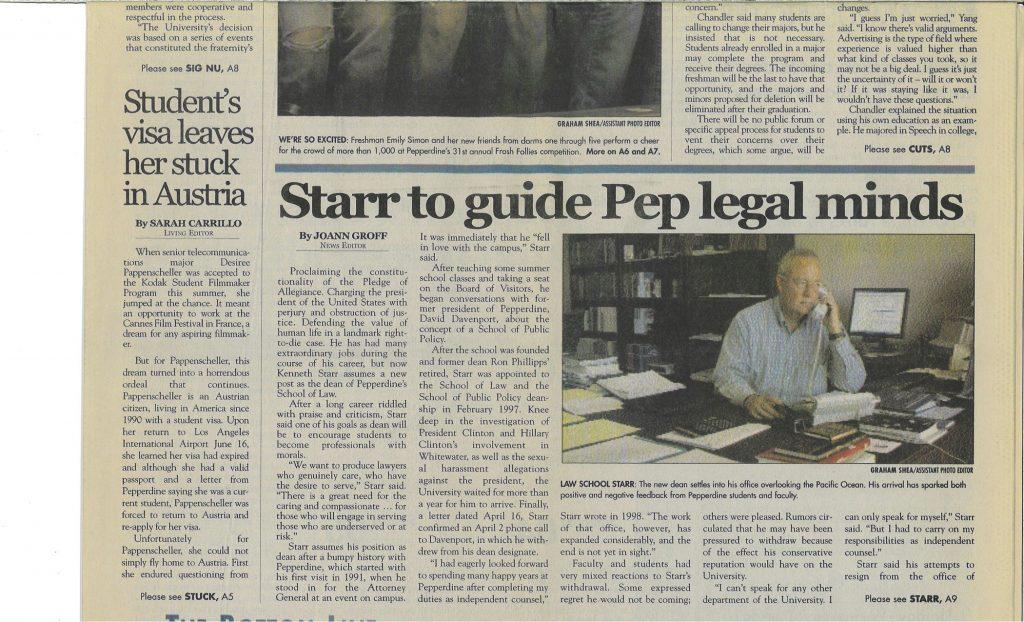 Article from the Aug. 30, 2004 edition of the Graphic about Starr’s goals during his first year as dean of Pepperdine School of Law.

Perrin acknowledged there were naysayers at the time but that Starr worked incessantly to unite them.

“Just watching him and his intentionality in those early years — he was working really hard to build relationships with the people at the law school who had the most concerns about his coming to the law school community,” Perrin said.

One of Starr’s landmark initiatives was the founding of the law school’s Global Justice Program.

“At that time, Dean Starr’s envisioned the Global Justice Program as a natural expression of the classical Christian mission — to try to give our students opportunities to serve in the developing world and to try to make a difference where there was great need and resonated with students,” Perrin said.

President Jim Gash was a major part in leading the Global Justice Program as he served as the Law School’s Dean of Students during Starr’s tenure. 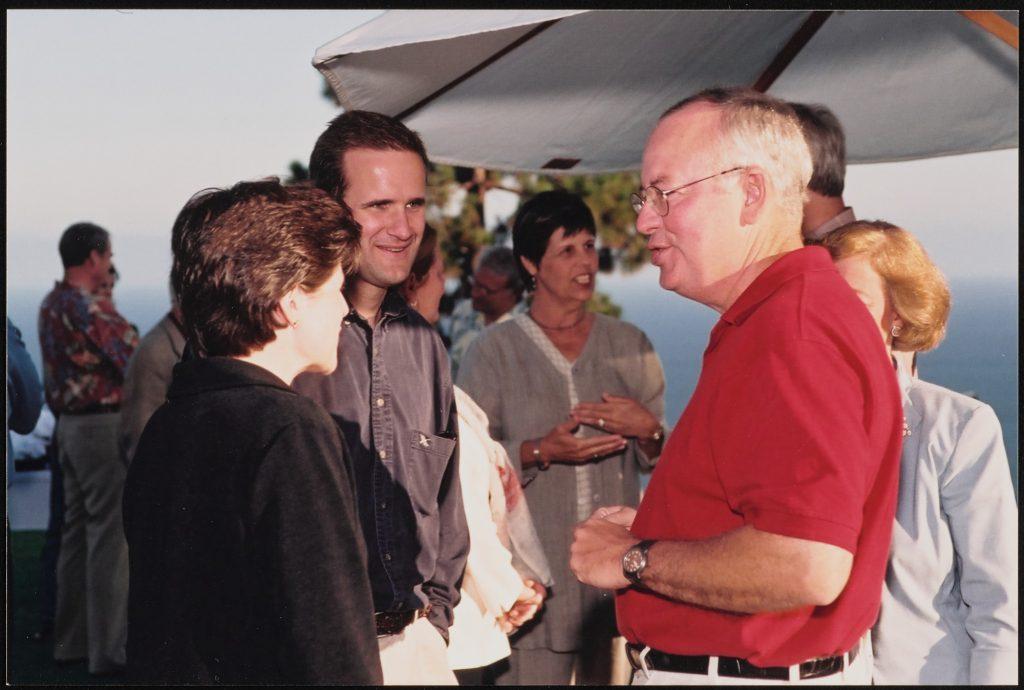 “[Starr] had appellate experience and was very involved in judiciary [affairs],” said Goodno, who was a law professor during Starr’s deanship. “He started a judicial clerkship task force, which is still today to really encourage our top students to go get jobs at clerkships.”

Perrin said the key to Starr’s years at Pepperdine was his work ethic and his ability to unite administrators toward a common goal.

“He had a really ambitious vision for what the law school could become,” Perrin said. “He was tireless in his pursuit of that vision.”

Starr left Pepperdine in 2010 to serve as president of Baylor University in Waco, Texas. He led the Baptist-affiliated college until May 2016, when he was fired as president and demoted to chancellor amid allegations that the university mishandled sexual assault allegations against its football players, according to the New York Times. 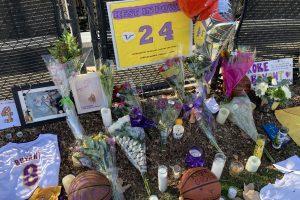 Momentos pile up at a memorial site in the Juan Baptista De Anza Park. Fans left everything from posters to flowers to basketballs...
Copyright 2013 Jupiter Premium Magazine Theme
Back to top