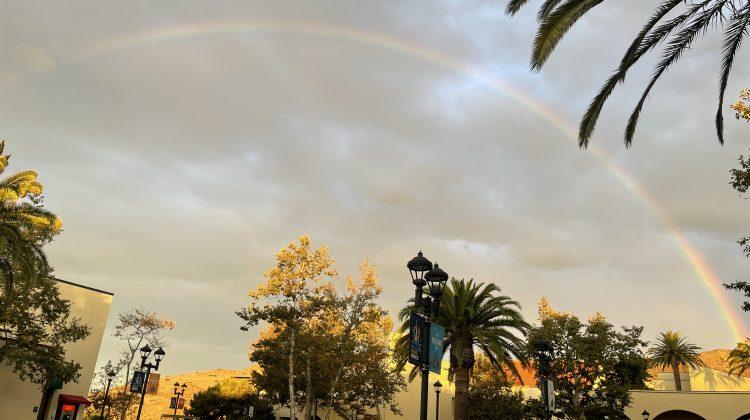 For many Christians, the rainbow is a sign of God’s promise to humanity. But, for first-year Lexington Russell, the rainbow symbolizes so much more.

Russell said when she sees a rainbow, it feels as if her grandmother is there with her. Rainbows also act as a reminder for Russell of God’s love for her.

The importance of the rainbow in Russell’s life began in April 2021 when her grandmother, who was battling cancer, began nearing the end of her life.

“The week preceding her death, I went to her house and I spent some time with her,” Russell said. “I laid with her and I talked to her. Then all of the sudden out of nowhere, this rainbow reflected off of the door in the other room and hit her face.”

Russell said she snapped a quick photo of this rainbow and showed it to her grandmother, who at the time, could not respond verbally but instead responded with a smile.

“I was like, ‘Grandma, you have a rainbow on your face,’” Russell said. “‘This is incredible! God’s promise. Like, this is just so cool.’”

Shortly after this interaction, Russell’s grandmother passed, but the image of the rainbow was a recurring one.

In August 2021, prior to Russell’s move to Pepperdine from Bakersfield, Calif., Russell was laying on the couch with her best friend who quickly moved to take a picture of her.

“He took a picture of me and turned it around and the same rainbow was reflected on my face,” Russell said.

Once Russell made the trip to Malibu in fall 2021 and began moving into her first-year dorm, she unboxed a sentimental moving gift from her best friend, Jayson Shores.

“It was one of the last things I opened during moving day,” Russell said. “I opened up this gift and it was this glass heart.”

In the corner of her desk in her dorm sits the glass heart with a photo of her and her grandmother engraved inside.

After a New Student Orientation event in August 2021, Russell saw yet another rainbow.

“My roommate goes into our room before me and at this point, she doesn’t know anything about my life and rainbows,” Russell said. “She goes ‘Lexi,this rainbow is reflecting on your bedspread and it’s so clear and beautiful’.”

Russell and her roommate, first-year Hali Orefice, located where the source of the rainbow was coming from.

“It was coming from the glass heart with the picture of my grandma and I,” Russell said. “I was just like at this point there’s no way, there’s just no possible way that it doesn’t mean something.”

Russell said the signs of rainbows are only becoming more prevalent in her life. Now, Russell has dozens of photos and stories about times that the rainbow has appeared in her everyday life.

“There was one when I went to Howdy’s and it was on my hand,” Russell said. “I was like, ‘Oh my gosh, my grandma’s holding my hand!’”

Rainbows are more than just a reminder of her grandmother and the love they had for each other, it’s also a reminder of God’s love and presence in her life.

Russell said herfaith has played a key role in her life since middle school, but it has grown and changed as she gets older.

Going into the second semester of her first year of college, Russell reflected on how much she had to mature in her attitude and become more accepting once she arrived and discovered all the different views of people here.

Russell said she takes her faith very seriously and reminds herself of His love and sacrifice for her life so that she can remain grounded in Him.

“Reminding the gospel to myself is the biggest thing because it brings me so much freedom, freedom in Christ, obviously, but just freedom in my mind and my soul,” Russel said. “I can walk every day knowing that I have a seat in heaven and my name is written in the book of life. It’s such a beautiful thing because this earth is so temporary and fleeting but Jesus is forever and he’s never changing.”