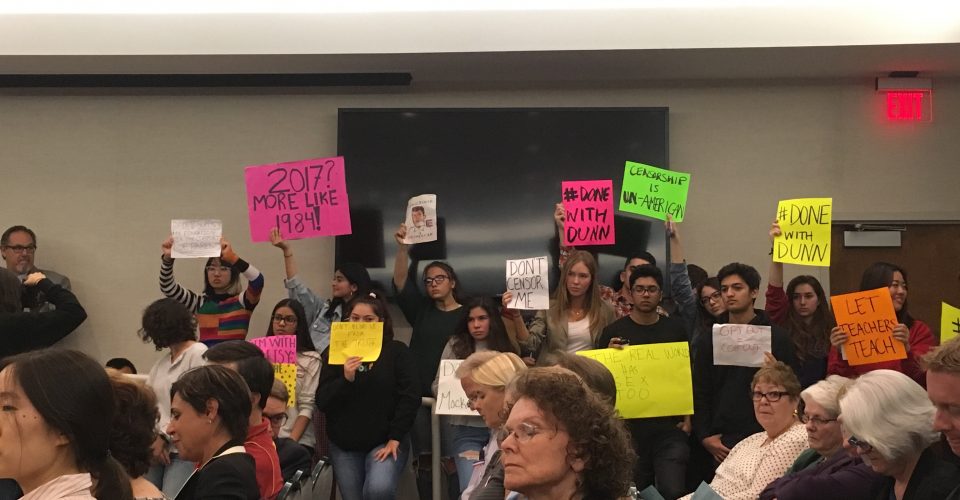 The CVUSD Board approved a policy Tuesday that will change the selection process for new books used in high school English classes.

The policy now requires a committee of parents and community members to be a part of selecting core literature books for ninth through twelfth grade English classes. It also stipulates that parents must be informed on class syllabi about book selections that include potentially disturbing or graphic material.

The policy, which was edited multiple times over the past two days and will undergo more edits post-vote, passed 3-1, with Board Member Betsy Connolly dissenting.

“This is not locked in concrete,” Board President Mike Dunn said of the policy. “This is flexible.”

The passed amendment itself is not currently available to the public, according to Trustee Sandee Everett, who authored the proposal. Everett wrote in an email to the Graphic that “there [will] be a few minor changes made and it is best not to have another version floating around that is not accurate or final.”

CVUSD Board Bylaw 9310 states that “all district employees and the public have access to an up-to-date district policy manual” that is available “either electronically or by paper copy.” The bylaw also notes that while policies may be revised as needed, policies “become effective upon Board adoption or at a future date designated by the Board at the time of adoption.”

Before voting on the amendment, the Board voiced their intention to make further amendments to the policy in the coming weeks with the goal of cleaning up the language so it can be instituted in the coming semester. Connolly said before the vote that she preferred to push the vote to a later date and make the changes discussed at the meeting before passing the amendment.

“The Board is voting yes to accept the policy with you working with [Deputy Superintendent of Instruction Robert] Iezza to change it however you see fit after the vote,” Connolly told Everett.

“After you pass this, you’re going to need to meet with Mr. Iezza and go over every line and decide what the policy actually is going to say, and your board majority is going to have to agree that that post-vote process will be satisfactory,” Connolly said.

Everett said she wanted to pass the amendment before changes were made to allow district administration more time to work on implementation before the start of the spring semester.

Iezza said the work being done to finalize administrative regulations would be easier once he receives a finalized document, because the edited document presented at the Board meeting was “really hard for me to make sense of.”

Everett and the Superintendent’s Core Literature Committee, which was originally tasked with drafting the proposal, met Monday to discuss issues they had with Everett’s version of the policy. Concerns centered around implementing the process laid out in Everett’s proposal, the proposal’s potential implications for selecting instructional materials for subjects outside of English, and other unclear language, according to previous Graphic reporting.

Everett met with administrators, including Superintendent Mark McLaughlin, on Tuesday morning to make further revisions. She said the meetings were “thoughtful” and that she wanted to dispel any ideas that her version of the proposal intentionally slighted teachers.

“Having an opt-out is not a comment on how our teachers teach,” Everett said. She later said that she does not “foresee this being a huge thing that many, many students use.”

The proposal reviewed by the Board on Tuesday was updated to indicate more clearly that it refers only to the selection of ninth through twelfth grade core literature. Paragraphs were also deleted to decrease redundancy and potentially confusing language. A statement ensuring that compliance with the processes of Advanced Placement and International Baccalaureate programs will be acknowledged in the selection process for additions to core literature curriculum.

Both the teacher and parent committees involved will now be “expected” to read any book under their review in the new selection process. In previous drafts, the committee of parent and community members was only “encouraged” to read the books. The newest proposal also specifies that mature content notifications would be listed using asterisks on books annotated by the California Department of Education as containing “mature content.”

The final language for the first step of the alternative assignment process for ninth through twelfth grade core literature, according to an email from Everett to the Graphic, reads: “The California Department of Education states, ‘This book was published for an adult readership and thus contains mature content. Before handing the text to a child, educators and parents should read the book and know the child.’ Per annotations produced by the California Department of Education, books identified as having “mature content” may contain portrayals of abusive human rights violations and rape as well as graphic language, mature situations, and other content potentially disturbing to students.”

Unified Association of Conejo Teachers President Randy Smith said during the meeting that initially, members of UACT felt that they were not being trusted or listened to by members of the Board during the proposal process. More time may have allowed more collaboration, Smith said.

“UACT and members on the Superintendent’s Core Literature Committee should have had more time to discuss and work on creating and crafting a cohesive and workable policy,” Smith said.

He explained that UACT did not actively call its members to the Board meeting because the last-minute collaboration between Everett and the Core Literature Committee put many of UACT’s concerns to rest.

“I am pleased that the collaboration in the end was the final solution, and I hope that can be remembered moving forward,” Smith said.

Before the vote, Connolly voiced several concerns with the policy as written, including issues with clarity in phrasing for the selection and review processes, opposition to the terms “proven” and “discipline” and lack of clarity for the process in which Board members would select parents and community members to serve on the new selection committee.

She also objected to the use of alarming language in the mature content notifications required on class syllabi and improper formatting for citations of California Education Code.

Everett said she will make changes to the policy in light of these concerns, removing the phrase “for each discipline” and striking one of the two paragraphs on page three that discuss the primary considerations for instructional materials.

“I don’t want people to misinterpret what the words mean, and if you did, then I assume other people have as well,” Everett said to Connolly. “So I would like to reduce anything that would cause people to feel that way. So I’m fine with that, but I think that that doesn’t impact the policy as a whole.”

Board Member John Andersen said he applauded the Core Literature Committee and Smith for “coming to a point of agreement and understanding” and voiced his support for the policy.

Andersen thanked constituents who had diplomatically presented their arguments and concerns during the Board of Education comments. He said he was reminded of a remark that a fellow Board member told him earlier in the year: “Democracy can be just a little bit messy sometimes, but this is democracy.” 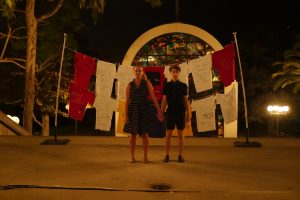 Photos by Kaelin MendezPepperdine students, faculty and staff came together to "Take Back the Night" on Monday evening, gathering...
Copyright 2013 Jupiter Premium Magazine Theme
Back to top