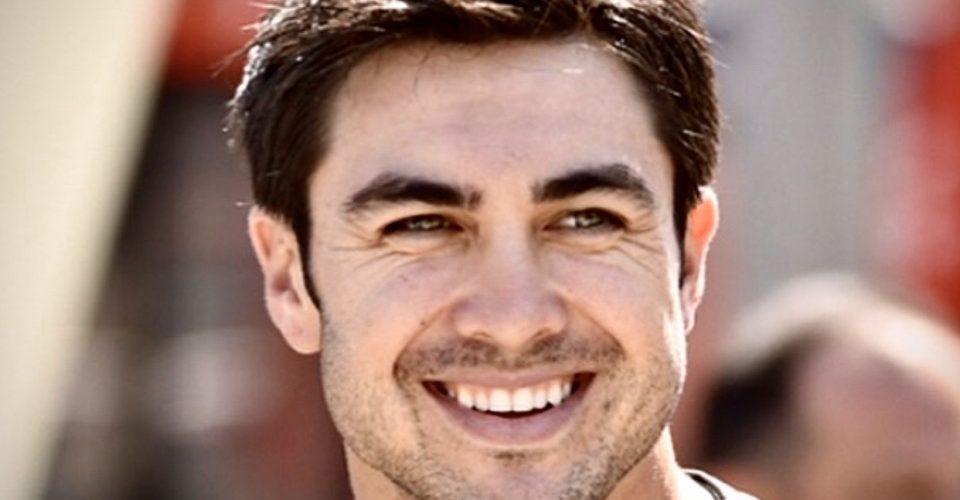 With the No. 144 pick in the 2008 Major League Baseball draft, the Pittsburgh Pirates selected Chase d’Arnaud.

The shortstop and third baseman from Torrance who lettered at Los Alamitos High School wasn’t the most tantalizing prospect; a 6-foot-1-inch, 187-pound infielder with decent strength, quick hands and average power in the batter’s box. Nicknamed “Cheetah,” d’Arnaud possessed elite base-running speed and a knack for stealing second.

The fourth-round draft pick also had an incomparable love of the game that was visible whether he was in the bigs or in Triple-A.

“Everything that I’ve done in baseball and in life, I try to accomplish two things: to bring people together and to lift people up,” d’Arnaud said. “That’s my checklist for everything that I pour my heart into.”

D’Arnaud said this over a Zoom call before his son Jagger ran into his bedroom and climbed onto his lap. He’s a father of two who stopped playing baseball after 12 professional seasons to return to Pepperdine and complete his degree in Integrated Marketing Communication.

Although the Los Angeles Dodgers drafted d’Arnaud out of high school in the 44th round, he made it a point to tell the teams scouting him that he wanted to live the college experience and round out other parts of his game.

D’Arnaud said he would forfeit his NCAA eligibility only under one extreme circumstance.

“Behind the scenes, there were a couple of teams that wanted to draft me in the third round out of high school,” d’Arnaud said. “I told the teams that it was going to take $1 million to sign because I wanted to go to Pepperdine. A couple of teams offered me $500,000 but I stuck to my guns and went to school.”

D’Arnaud played three seasons at Pepperdine before becoming eligible once again for the MLB Draft. Many high-level baseball prospects struggle with leaving their university one year early to pursue a professional career.

D’Arnaud said he worked into his initial contract with the Pirates that they would pay for him to finish his education.

“Teams are happy to do that if you’re drafted high enough,” d’Arnaud said. “They think it’s gonna move the needle and upgrade their signability. For me, that was a no-brainer. It had to be included in my first contract.”

The young rookie and the Pirates decided on $50,000 to give to d’Arnaud for whenever he decided to come back to Pepperdine. Little did he know that it would be after a decade of going through the professional baseball ringer. Due to inflation, he said that it wasn’t enough to cover the full year, but he and the university worked out a deal to where he would work with Pepperdine Baseball and be a part-time consultant for the team.

The Highs and Lows of the Pros

D’Arnaud spent his first three seasons with the State College Spikes, located in Pennsylvania, followed by the West Virginia Power, Lynchburg Hillcats and back to Pennsylvania with the Altoona Curve.

On the same day, d’Arnaud recorded his first hit. Nine years later, he remembers every detail of what he saw in the batter’s box.

“It’s impossible to not smile even now,” d’Arnaud said. “I was going up against a godly defense. Ellsbury, Manny Ramirez, Big Papi [David Ortiz]. It was the OG Red Sox, guys that I played with in video games. Jon Lester threw me a cutter high and inside, I got the barrel to it and hit what looked like a double that short-hopped the left field wall. I was rounding second base thinking, ‘I can’t believe it’ before realizing I could make it to third, and I got there.”

D’Arnaud, who hit the triple in front of his entire family and a number of friends, said it’s a pivotal experience for any young ball player.

“There’s a euphoria in that brief moment in time,” d’Arnaud said. “You only have a little bit of time to celebrate because you have to get your head back in the game as a baserunner 90 feet away from scoring. It was one of the highlights of my career, and the same can be said for anyone who experiences their first.”

D’Arnaud spent the next three years with the Pirates with periodic stints in the minor leagues. In Nov. 2014, he became a free agent and signed with the Philadelphia Phillies and minor league affiliate Lehigh Valley IronPigs. Over the next five seasons he spent time with the Braves, Red Sox, Padres, Giants, Rangers and Royals.

One of the most notable games from d’Arnaud’s career was when he was played for the Giants on Aug. 19, 2018. 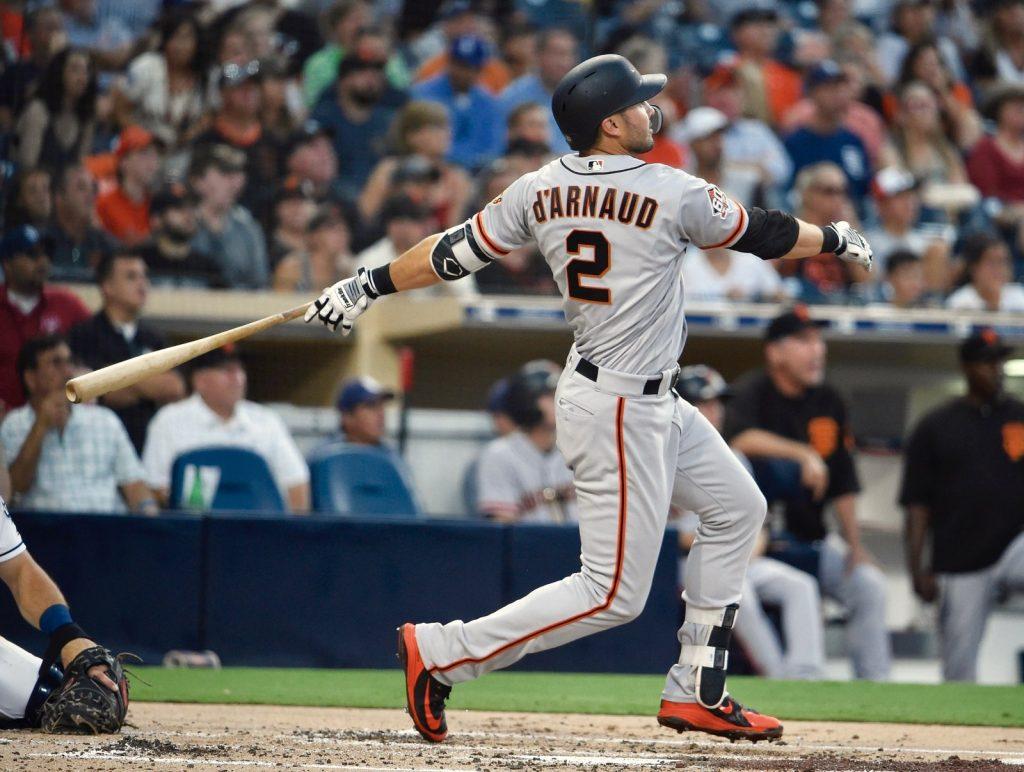 Utility infielder Chase d’Arnaud bats at a game when he was playing for the San Francisco Giants. One of d’Arnaud’s fondest big league memories came when he pitched a scoreless inning for the Giants in 2018.

After going up 1–0 in the second inning, the Giants gave up seven runs in the third inning and longtime manager Bruce Bochy knew that the game was out of hand. Instead of reaching deep into his bullpen and running the risk of getting quality arms tired in a meaningless summer game, he decided to put a position player on the mound and d’Arnaud was the first name that came to mind.

“I happened to be the lowest guy on the totem pole,” d’Arnaud said, laughing. “Bochy came up to me, very curious and asked, ‘Have you ever pitched before?’ And I said yes because I pitched an inning in Triple-A a while back and it was scoreless. So later that inning he put me in the game to hit because I didn’t start that day. I hit a double and found myself on second base when the inning ended. I heard him yell my name and then point to the mound.”

“Nick Hundley was catching,” d’Arnaud said. “He goes, ‘What are you throwing?’ I told him I’m throwing 75% cutters and the rest two-seamers. It worked well cause I allowed no runs and one hit.”

As a pop-out to right field that was caught by Austin Slater, longtime Giants analyst Mike Krukow let out a proud, “Remember where you were” as the inning concluded.

Although d’Arnaud stepped away this season for personal reasons, the 33-year-old said that he wouldn’t rule out returning to baseball.

“I still don’t even know if I’m done with the game,” d’Arnaud said. “I stopped because I wanted to spend more time with my family. It would break my heart being gone for two weeks to get home and see that my son had changed so much. But I still have withdrawals all the time, it kills me watching baseball on TV. I know that I’m healthy and I can still play and I’ve even talked to a couple teams about coming back.”

On the side, he runs chasedarnaud.com, a media company that he founded based off a love for film and production he developed at Pepperdine. 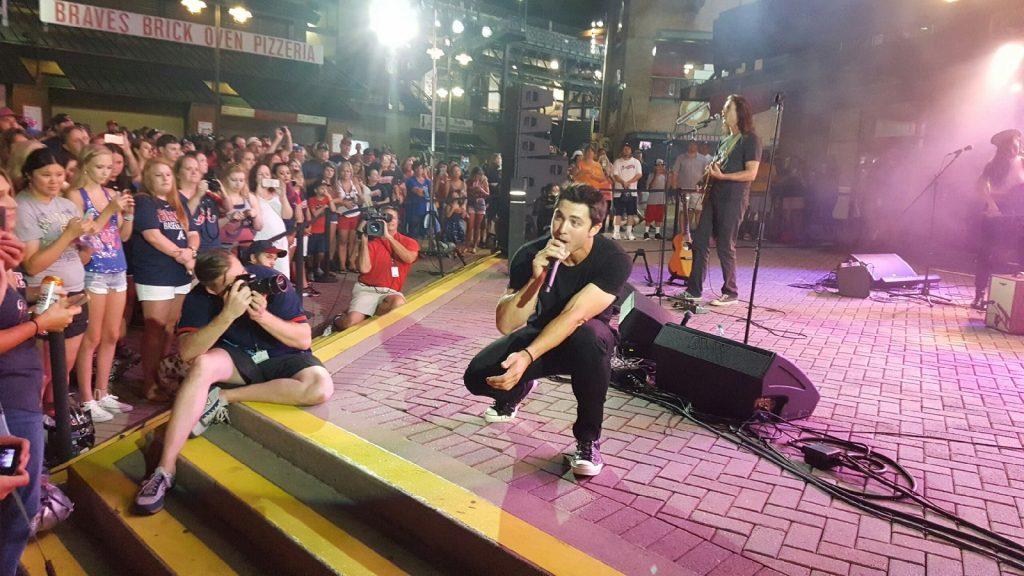 Chase d’Arnaud performs onstage for many spectators. With his playing career on hold, d’Arnaud operates a media company for film and production.

D’Arnaud said his three-year plan is up in the air, but he believes Pepperdine will help him with the process.

“I’m back at Pepperdine so that I could make the right decisions moving forward and pick up where I left off,” d’Arnaud said. “When I set out on that professional baseball journey, Pepperdine was often in the back of my mind. Depending on how things go this year and where my head is at once I graduate, it’s really going to dictate my future.” 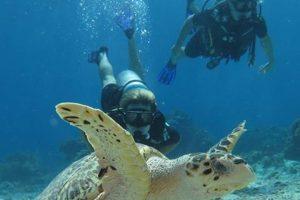