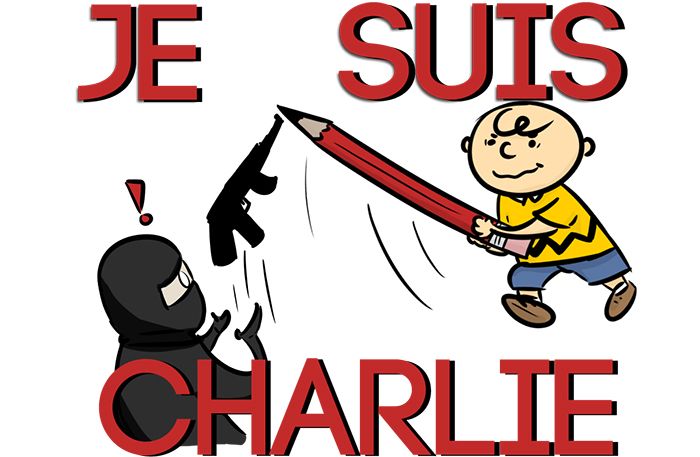 I am not Charlie. I don’t expect Muslims to be either. We rightly regard the massacre of 10 journalists as a monstrous tragedy, but our reaction to it betrays a disconnect from the worldview of about two billion people. If the offices of the Westboro Baptist Church were blown up by a lunatic, no one in this country would claim solidarity with them and re-tweet, “I am WBC,” despite believing in their right to say what they want. We may say “Je Suis Charlie” is about standing up for freedom of expression. But we change our tune from heartfelt support to begrudging acceptance when our culture is on the receiving end of the vitriol.

What might surprise us here in post-Christian America is the reaction from some of Niger’s Muslims to the slogan “Je Suis Charlie.” Mobs set fire to six churches and stormed a French cultural center. What on earth do Niger’s Christians have to do with French cartoonists? As Niger is an ex-French colony, many Muslims there associate Christianity with “the West” and the days of French imperialism. There is more to this story than we can appreciate on this side of the Atlantic. It’s a clash between two worlds that most of us know little about.

In her blog, Muslim cartoonist Katie Miranda commented on the fact that the two gunmen were of Algerian descent. Algeria was another part of the now-dead French Empire, which France conquered with the utmost brutality and later lost in a vicious war that incriminated both sides in atrocities. Charlie Hebdo didn’t “have it coming” by any stretch of the imagination, but they stepped on a mine buried in an age-old battlefield.

France is not the only Western power that has alienated the so-called “Muslim world.” We in the U.S. can quibble about whether everything we have done can be justified, but news of torture at the CIA’s black sites, drones dropping missiles in rural Pakistan or photos of humiliated prisoners at Abu Ghraib in Iraq sent very different messages to those who were not sure that Americans were the good guys by default.

The drawn-out nightmare that is Israel vs. Palestine has forever altered Arab-Jewish relations on a global scale. Israel’s actions are being used to fuel a new anti-Semitism that looks very much like the West’s did. Meanwhile in Europe, Muslim immigrants in France, Belgium and the Netherlands are faced with far greater rates of unemployment and poverty. Couple this with the anti-Muslim backlash that’s sweeping through that continent, and all of a sudden the maniacs can tell themselves that they have the moral high ground. The best fuel for extremism is exclusion combined with a victim complex.

Am I saying that Quran-toting extremists are truly victims, and we really are the “Great Satan” of Bin Laden’s tirades? Good God, no. Boko Haram and ISIS are busily turning their corners of the world into a living Hell on earth; Christians, Yazidis and Muslims alike are mowed down (yes, Mr. Conservative Pundit, Muslims do speak out against the violence). No one who dyes their clothes in blood can say that they are clean. Just don’t be surprised if to some ears, “Je Suis Charlie” sounds less like “Freedom!” and more like “Screw you!”

The solution to the quagmire we find ourselves in has to go way beyond “journalists vs. jihadists” or “political correctness.” We need empathy, which calls for both sides to admit fault and understand the other’s fear and anger. It can happen, and I’ll point to a little-known incident from the Crusades to prove it: When the Egyptian sultan Al-Kamil defeated the marauding Christians, he was praised for giving them food and treating them well. (Yes, Islam can be peaceful too!) Tradition has it that Al-Kamil received St. Francis of Assisi, and even allowed him to preach to the king in his own throne room. Let’s hope that, more than 700 years later, we all might be that forgiving.