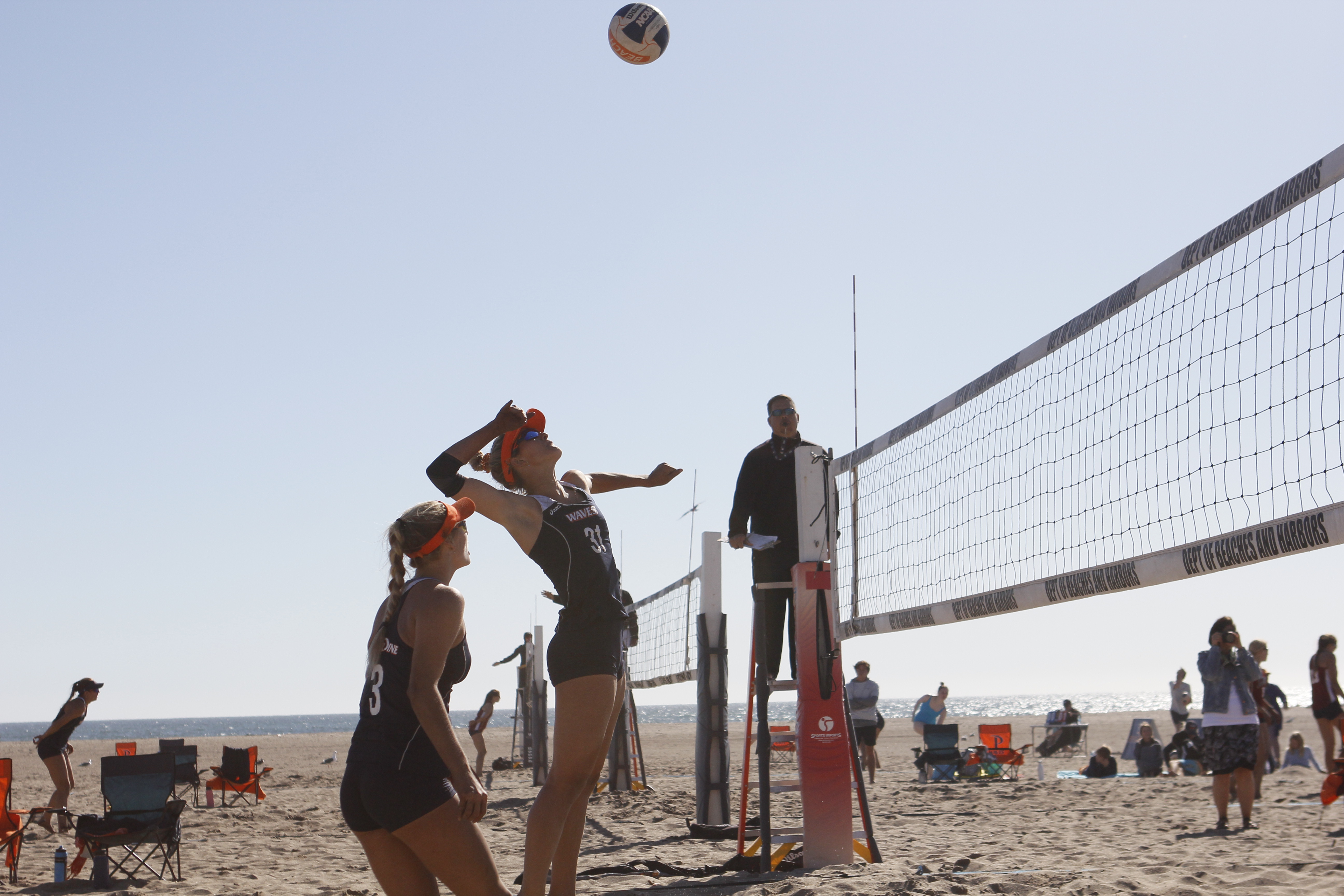 A major lineup change energized Pepperdine Beach Volleyball to win three matches at their own Waves Invite on Wednesday, March 13 at Zuma Beach.

“It’s always great to be at Zuma,” first-year Head Coach Marcio Sicoli said. “We love how the wind affects the game … We train here every day— we have a big advantage.”

Even though consistent rain, an injury to key senior Maddy Roh and three-straight losses dampened the early season outlook, the return to Zuma featured blue skies and three Pepperdine pairs going undefeated on the day.

Top-ranked UCLA swept the Waves at Zuma a week earlier, the first time Pepperdine had suffered a 5-0 loss at home in program history. The Waves then lost twice March 9 at the East Meets West Invitational at Manhattan Beach to No. 4 Florida State and No. 6 Louisiana State (LSU). The team bounced back to defeat TCU and No. 9 Florida International on March 10.

“We definitely had a tough weekend,” Sicoli said. “We’re getting to know this team better, so we’re learning.”

Between the two tournament days at Manhattan Beach, Sicoli engineered an upheaval to the lineup that mixed up the pairs on each court, and the new partnerships were successful at the Waves Invite.

“What we have been doing is knowing where each piece would fit better for us as a team,” Sicoli said. “We did a big lineup switch. Let’s see how that’s going to go.”

Thus far, it has proven to be just what the Waves needed. Courts two, three and five went undefeated throughout the day, while courts one and four each dropped a game against Cal Poly.

After playing on court two throughout the early season, junior Deahna Kraft moved to court one with sophomore Brook Bauer.

“We’re definitely a new partnership,” Kraft said. “Brook [Bauer] is such a stud, so she makes my life really easy. We both have really open communication, which helps.”

Kraft and the Waves began the day by making short work of TCU, with the top three courts winning both sets and the bottom two courts winning in three sets to complete the 5-0 sweep.

Pepperdine started well against Cal Poly, with senior Heidi Dyer and junior Gigi Hernandez on court two and senior Skylar Caputo and sophomore Alexis Filippone on three winning in straight sets. However, Kraft and Bauer then fell in straight sets on court one, at the hands of Cal Poly’s Crissy Jones and Tia Miric, and Pepperdine’s Nikki Lyons and Maddie Dilfer were defeated on four in three sets.

The match would be decided on court five.

“On five, we have a freshman and sophomore — dealing with that pressure, to define the best teams in the west, and they delivered,” Sicoli said.

They delivered indeed, as freshman Simone Priebe and sophomore Katie Gavin closed out a 3-2 Waves victory, with a 21-15, 19-21, 15-12 victory over Cal Poly’s Heather Pembroke and Sjea Anderson.

“We all trust each other, it could come down to any one of our courts,” Hernandez said. “I’m super proud of [Priebe and Gavin]. They’re working so hard, they’re showing up and they’re clinching matches for us.”

Hernandez and her partner, Dyer, were on fire throughout the day, dropping only a single set to LMU by two points.

“Heidi and I played all season together last year,” Hernandez said. “We have a natural chemistry; we mix things up.”

Caputo and Filippone also dropped a set against the Lions but were otherwise unscathed in all three matches. The two clinched the victory against LMU just as the wind was picking up at Zuma.

“LMU is a great team and a great program, and they’re getting better every year,” Sicoli said. “But they are our rivals. It’s the PCH Cup, [and] we put up one on the board. It’s always awesome dominating that PCH Cup.”

With important matches coming up against some of Southern California’s best, the Waves, at 11-5 on the season, continue their quest for the program’s third national title.

“We’re hitting the middle of [the] season right now, so these wins are really important,” Hernandez said. “We’re really working hard as a team to come together.”

Three of Pepperdine’s five losses came against the best team in the country: UCLA. The Bruins swept the Waves again March 16 in Westwood.

The Waves still have remaining matches against Long Beach State, Southern California (USC), Cal Poly and Hawaii, all teams ranked in the top 10 in the nation.

“We’re just going to keep fine-tuning our relationships and just playing and competing,” Kraft said. “If we just keep doing what we do best, we’ll have a good chance.”

The Waves will travel to Long Beach Wednesday to take on the 49ers at 1 p.m.