Junior left-hander Nathan Diamond throws a pitch against University of the Pacific on March 27, at Eddy D. Field Stadium in Malibu. Diamond came in unexpectedly in the second inning, recorded six strikeouts through 4.2 innings pitched and earned the win for the Waves. Photos by Mary Elisabeth

Pepperdine Baseball (14-9) wrapped up their series with University of the Pacific (7-15) on Sunday, March 27, with a 5-3 comeback win on a sunny afternoon at Eddy D. Field Stadium in Malibu.

“We had a tough weekend last weekend,” Johnson said. “So it was good to come out with a sweep this weekend and get rolling into the rest of conference, and show everyone that we can play.”

The Waves improved to 4-2 in WCC play and remain in fourth place in the conference standings.

Going into Sunday’s action, the Waves had already claimed victory in the series thanks to their performances earlier in the weekend.

On Friday, March 25, the Waves rode an impressive offensive showing to an 8-4 win over the Tigers. Sophomore infielder John Peck reached base in all five of his plate appearances, tallied one RBI and scored two runs. The Waves scored at least one run in six of the eight innings they came to the plate.

The Waves’ bats continued to fire in Saturday’s game, and the team totaled 11 hits in its 5-3 win against the Tigers. Junior right-hander Trevor Hinkel reached 7.0 innings pitched for the first time in his collegiate career.

“It’s always hard to beat a team three times in a row,” Johnson said. “It is tough, but we didn’t lose focus. We’re always ready to play, and that’s what we did today.”

Sunday’s win wasn’t smooth sailing for the Waves. Only one Waves batter reached base in the first three innings.

Graduate student right-hander Dane Morrow — the Waves’ starting pitcher — left at the start of the second inning due to injury. Head Coach Rick Hirtensteiner said Morrow’s status remains unclear, and the team awaits further evaluation on the extent of the injury.

“When Morrow came out of the game in the second [inning], that’s a big time where, if you’re not mentally prepared to go into the game, the other team could get some runs right away on you,” Hirtensteiner said. “[Diamond] did a good job keeping us in.”

Initially, Diamond struggled to get batters out after replacing Morrow. Diamond walked junior Brandon Motheral in his first duel before two well-placed bunts moved the Pacific outfielder around the bases for the first score of the afternoon.

One passed ball, walk and a single later, Pacific doubled their lead. When Pacific infielder Chaz Meyers, the seventh Pacific batter to come to the plate in the inning, grounded out to shortstop and the dust settled, the Waves found themselves in an early 2-0 hole. 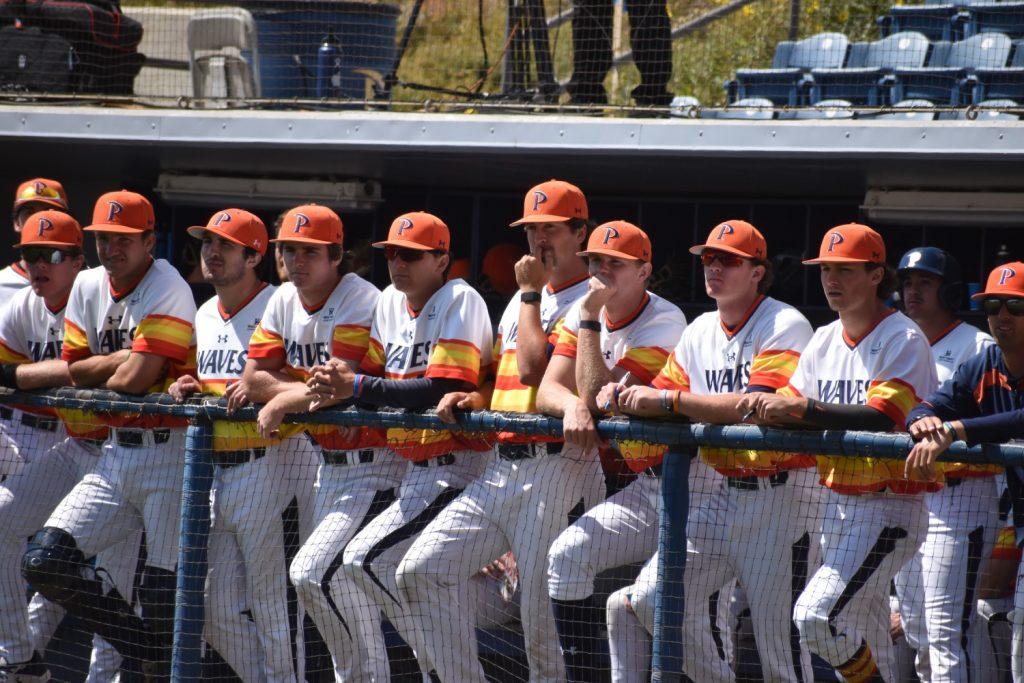 Diamond gained composure as the game progressed, posting a shutout through his next 3.2 innings. He recorded six strikeouts and stranded four Pacific runners on base over the course of the afternoon. It was Diamond’s second win of the season.

“I just have to thank my coaches for the preparation we’ve done all fall and all spring, and them being able to trust me to go into a situation like that and know that I can get the job done,” Diamond said.

Diamond got some help from his offense in the bottom of the fourth inning, when the Waves bats woke from their three-inning slumber. Peck rocketed a double off the left-field wall. In the next at-bat, graduate student outfielder Mike Malinchak drove Peck home with a single to right field, cutting the Tigers’ lead to 2-1.

“The bats are always going to be on and off,” Diamond said. “But we know our hitters can hit. We trust our guys to be able to score runs, and they did.”

Three at-bats later, Johnson stepped up to the plate with one out and runners at second and third base. Johnson connected with a slow-moving pitch and drove the ball to deep right field.

The Pacific outfielders turned and watched as the ball looped through the clear blue sky far above their heads and over the outfield wall. Johnson rounded the bases and ran through a tunnel of his teammates on his way into the dugout, with his team now up 4-2.

“Honestly, with guys on second and third, I was trying to hit a sac fly,” Johnson said. “I hit it in the air, so I was happy. And it got out, so even better. I’ll take it.”

The next two innings featured a pitching duel between Diamond and Tigers’ right-hander Zach Patterson. Hirtensteiner went to the bullpen for the second time midway through the sixth inning, calling on Kniskern.

Kniskern gave up two hits, one walk and one run in the top of the seventh inning, but was otherwise lights out.

“The pitchers have been great all year,” Johnson said. “Everybody threw strikes. Didn’t have a ton of strikeouts, I don’t think, but we got guys out and that’s what’s important.”

The Waves’ offense responded in the bottom of the inning, taking advantage of Patterson’s replacement — senior right-hander Jackson Vaughan. With one out, Vaughan gave up back-to-back singles, before Peck knocked in a run on a fielder’s choice to increase the Waves’ lead to 5-3.

Both teams combined for one hit in the next two innings. Senior left-hander Grant Georges came in for the Waves in the top of the ninth inning. Georges gave up zero runs and zero hits through 0.2 innings pitched, earning his seventh save of the season.

“In order to be successful, we have to have good starting pitching, which we had this entire weekend,” Hirtensteiner said. “And we need to continue to be tough outs at the plate. You put the ball in play, you have the chance to get a hit.”

The Waves turned their struggling home form around, after losing the last two home series to University of Connecticut on March 11-13, and WCC rivals University of San Diego on March 18-20.

The Waves fell to Long Beach State 5-4 in Malibu on March 29, snapping their four-game win streak that dated back to March 22. Next up, the Waves will travel to Gonzaga for a three-game series April 1-3.