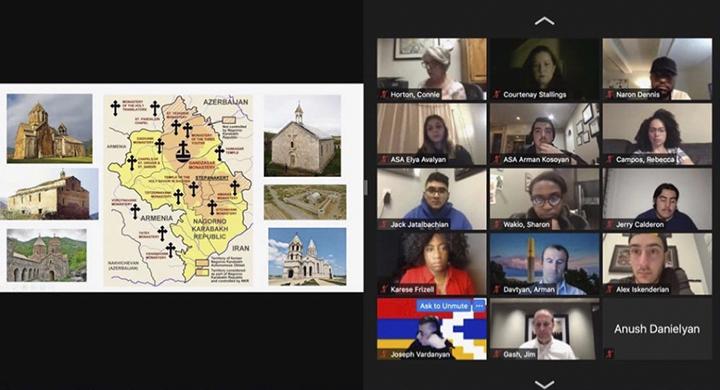 The Pepperdine community listens as Ardashes Kassakhian, City of Glendale council member, talks about the history of Armenia on Zoom. Students, faculty and administration, including President Jim Gash were in attendance at ASA’s informational forum Nov. 4. Photo courtesy of Pepperdine ASA’s Instagram

Updated Saturday Nov. 21: On Wednesday Nov. 18, SGA unanimously passed Resolution #04-F20 in support of Pepperdine’s Armenian students. “After so many years, Armenian students on campus are finally getting the recognition they deserve,” ASA wrote in a post on their Instagram account announcing the resolution news. A supplement to Resolution #05-S17 passed by SGA in 2017, the resolution approves the following actions:

Senior Yoona Lee said she felt inspired to join Pepperdine’s Armenian Student Association not because she is Armenian herself but because she wanted to take action and support her friends. This semester, Lee and the other members of ASA are raising awareness in the Pepperdine community through outreach and events, including a Nov. 4, virtual forum.

About 88 students, faculty, staff and administrators attended the forum, which featured guest speakers Ardashes Kassakhian, a City of Glendale council member, and Zarik Boghossian, a Pepperdine faculty member and entrepreneur. The event included a presentation on the history of Armenia and an inspirational discussion about the spirit of Armenia and the power of young Armenian leaders and allies.

“I learned a lot of things I didn’t know, which was awesome,” senior Shant Ganoumian, president of ASA, said. “If I learned something, that means people who knew less than me learned a lot too. That was the main goal.”

Ganoumian said the event was a success for ASA, especially with so many people from multiple Pepperdine campuses in attendance, as well as a few people from outside of the community.

“One of the most important things is that I wanted to have Armenian students see that I’m listening — that I care about them,” Horton said.

Having administrators in attendance was meaningful to the members of ASA, Ganoumian said.

“It was awesome seeing them there because they are the people who lead the school, and they set an example for everybody else,” Ganoumian said

Ganoumian said ASA members hoped the forum would educate people about Armenia, its history and the war Armenians are facing.

“People just don’t know about what’s going on in Armenia, and I think it’s really important for people to know,” Lee said. “Just because they’re thousands of miles away doesn’t mean it doesn’t affect the U.S.”

Attendee Takeaways from the Event

Many Pepperdine students — including Student Government Association members Jerry Calderon, Karese Frizell and Roline Attia — attended the event because they wanted to learn more about an issue that affects their Armenian friends and learn ways to support them.

“I wanted to learn how to be an ally, specifically to this movement and what they are calling for action,” said Calderon, SGA junior class senator, ICC president, and Indigenous Peoples Club co-president.

Frizell is also an SGA junior class senator, and senior Attia is SGA vice president of finance. Like Calderon, both said they went to the forum wanting to learn more about how to be an ally to their Armenian peers.

“The first step is acknowledging there are other groups who are hurting and then doing what you can as a person — doing your job to get yourself educated and seeing what you can do to help them,” Frizell said.

Attia also emphasized the importance of education as the first step to allyship.

“You’ve got to get to the point where you’re like, ‘Yes, I don’t know much about this, but I am ready to learn,’” Attia said.

Frizelll said it was inspiring to see the strength and heart of the Armenian people.

“You really got a sense of the heart and the passion of the community — even in the chat, everyone was positive and boosting each other up and it was like a sense of family,” Frizell said.

Horton said she found the sense of unity among the Armenian community during the forum moving.

“It’s an example for us, too, in whatever individual or collective suffering we have to stick together — to have connections — is huge,” Horton said. “[It] doesn’t take away the suffering, but as far as endurance, [it] makes a difference,” Horton said

Lee relates with the Armenian struggle and pride through her Korean heritage. Like the Armenians, Koreans also possess significant pride in their culture, which persists despite a painful past, Lee said.

“One of the biggest takeaways I got is do not be afraid of sharing your culture to other people; be proud of where you come from and be proud of your culture,” Lee said.

During the Q&A portion of the event, the guest speakers discussed why non-Armenian people should care about the current war in Artsakh.

“It’s the fact that we’re humans,” Lee said. “We should do this because we are human beings, and we should really be helping each other.”

SGA’s Diversity, Inclusion and Equity committee is working with ASA on reviving a 2017 SGA resolution to show continued allyship for Armenian students.

“The core of it all is our students: They’re hurting right now,” Attia said. “Regardless of what is going on in the world, we have a responsibility to support our students in any way we can.”

Calderon, who is a member of the committee, said he thinks it is essential to actively involve ASA in each step of creating this resolution.

“[We’re] using our platform and our privilege in these positions to be a megaphone for their voices,” Calderon said.

This semester, ASA utilized social media to spread awareness about what’s happening in Armenia and partnered with Greek life organizations and other cultural clubs to design and sell T-shirts to raise money for the cause.

ASA does not have any immediate future plans after the forum, Ganoumian said, but members are pleased with how this event went and how many people showed their support.

“I wanted to give a big thanks to all the students who came — whoever showed up and learned something,” Ganoumian said. “It means a lot to us. It really does.”

Lee, Calderon, Frizell and Attia all emphasized the importance of continuing to be a vocal ally for Armenian students online and in-person.

“As long as Armenia is fighting, we should be fighting as well,” Lee said. “The support cannot stop because they’re literally fighting for the safety of their lives — for their families — and we cannot turn a blind eye to that.”

Ways to Support the Cause

People can donate directly to the Armenia Fund by visiting Armeniafund.ejoinme.org/donate

To donate funds and get a shirt, Venmo @Pepperdine-Psi-U $25 with your full name and shirt size. Someone will then contact you for shipping information once all orders are placed.

To watch the Zoom recording of the Nov. 4 forum, click here and use the following passcode: cS&lq%9%

For more information, refer to these sources: Armenian National Committee of America & Armenian Assembly of American