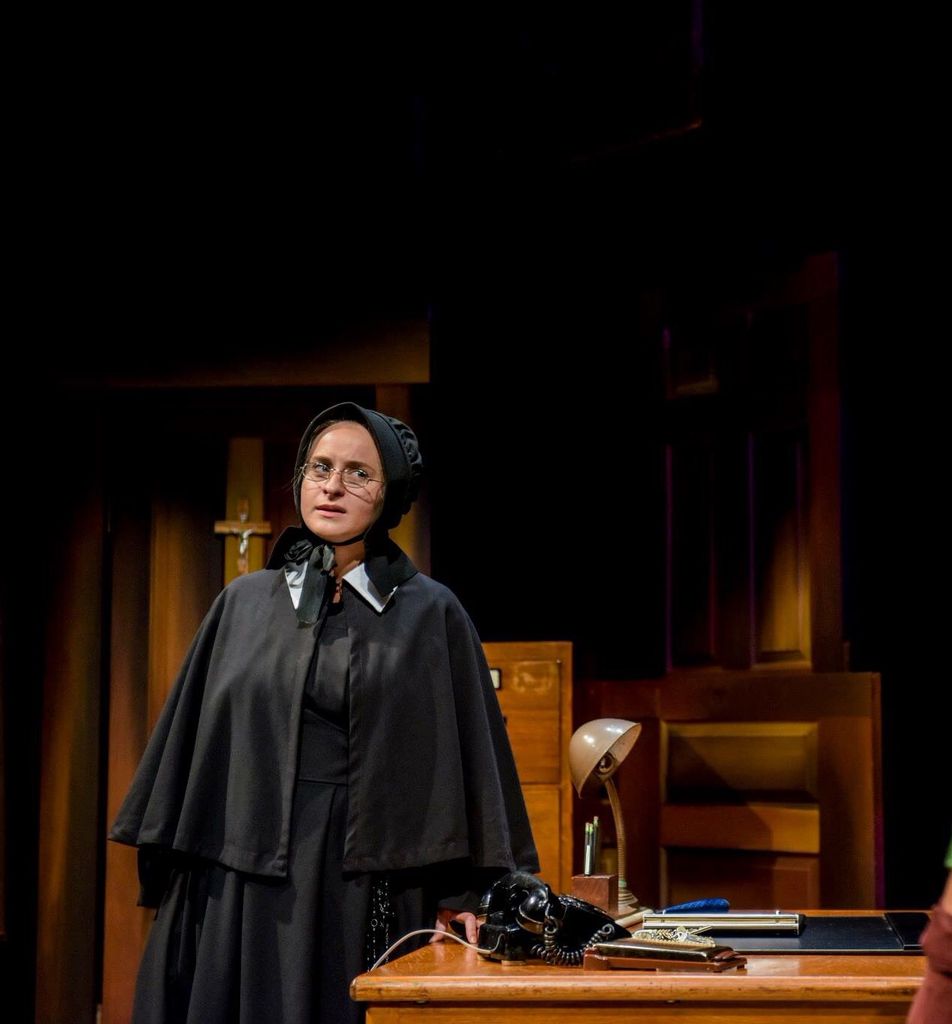 The Graphic sat down with senior Karolina Keach to talk about her passions of acting, inspiration, and foreign origins.

A: Theater, with an emphasis in acting.

A: Well, I’m a transfer, so before, I was at the London Academy of Music and Dramatic Arts for a semester to study Shakespeare, which became my passion. I have a heart for classical, but here I’ve done two contemporaries. I would love to do comedy, but haven’t had the opportunity.

Q: What was the project you did most recently and who was the character?

A: I was recently in “These Shining Lives” on campus, and I played Charlotte, and that was more of a supporting role. Long story short, this play was about the women in the 1930s who worked in the Radium Dial Company. Back then, they hired women and would pay them amazing amounts of money, for the that time in history at least, to paint watches. What the women didn’t know, however, was that they were painting the watches with what later proved to be radium. After ten years, they started dying. This play explores the lives of four girls trying to fight for their rights at that point.

Q: Where are you from?

A: It’s a bit complicated. I was born in Poland, but lived here in Malibu in elementary school, moved back to Poland until university, where I went to Cal Lutheran, went to London, then came here.

Q: What has helped you in your pursuit of acting?

A: I’m from an acting family, and definitely my parents have encouraged me. Also growing up in LA, I was always surrounded by actors and cinema.

Q: Any inspiring movies or actors?

A: I’m obsessed with Meryl Streep. Obsessed. It was really funny actually, because a few years ago she played Sister Aloysius in the movie “Doubt,” and Pepperdine did “Doubt” in September, and when I found out we were doing it, I just had to try out for the same part as her, because what an honor it would be to play the same part as her. Then, I actually got cast as Sister Aloysius so it was like my dream came true. I watched that movie over and over again, and a major part of my performance was based off her.

Q: Any hopes or goals for your future with acting?

A: I just auditioned for the Oregon Shakespeare Festival, hopefully I’ll get in. It’s like an amazing company, one of the best in the world. That’s short-term. Long-term, I would like, as everyone who studies theater, to be on Broadway one day. Now that I’m getting married and moving back to Poland, I’m not sure that’s going to happen, but long-term I would definitely love to be a theatrical stage actress in New York.

Q: What is some other stuff you do?

A: I do yoga; yoga is fun. I’ve recently started hiking, like around Malibu. I’m not really an outdoorsy type of person, but hiking has been fun. I love animals, I’m obsessed with dogs. I love spending time with my family and going to the movies. I just saw “Kingsman: The Secret Service.”

Q: Any Oscar predictions off of that?

A: “The Theory of Everything,” for Best Picture and Best Actor, Eddie Redmayne. It’s so good, and the performance will have you in tears. I really didn’t like “The Imitation Game” and it was nominated for like a million Oscars.

Q: How could the Pepperdine drama department improve?

A: I think there should be a program, or class maybe, that introduces new playwrights and new plays, because there’s honestly no class besides Theater History, which is really just still the past of theater, that you really even go into new playwrights and where the craft is going. New plays are coming out every month, every year, and it’s difficult because we’re supposed to know everything new coming into the theater world and I just wish we were introduced to work like this before graduating. Maybe then we could go through a new play every week. This could even be an outside program. Also, I think there should be end of the year recitals like the Music majors have. The absence of these performances makes it tough too, because that’s the time when all the music majors can bring agents to come see you and decide going forward if they want to help represent you getting into the music business community. Here we don’t have that in the theater department, and that kinda sucks, because then for those of us who maybe aren’t even in a show get that chance too.