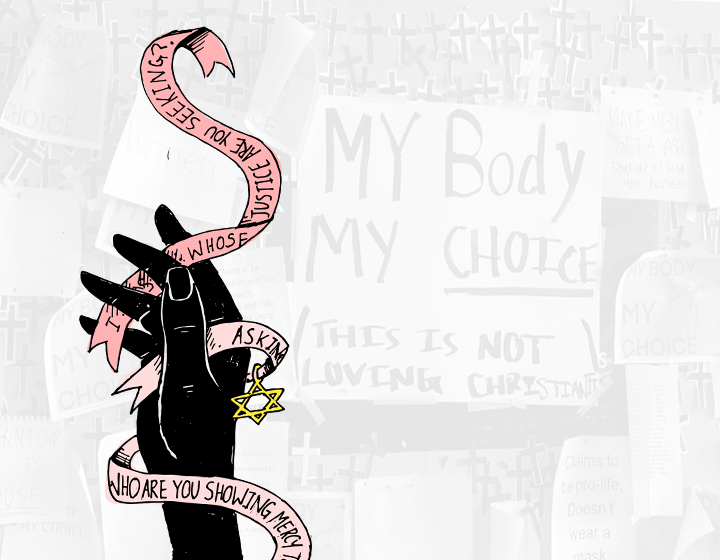 Editor’s Note: Guest Contributor Hope Lockwood is writing a personal essay based on their experience of what happened at the Freedom Wall and their Jewish background.

This past week at Pepperdine, student discourse raised tension over the topic of abortion. I overheard a Christian, anti-abortion advocate saying abortion is comparable — if not worse than — the Holocaust. As a Jewish student, I was deeply offended.

How dare people use and misappropriate a genocide committed against my people, my culture and my religion that sought to wipe out Jewish people, Romani people, Polish people, gay men and disabled people as justification for your selfish, political, anti-choice tirade. One cannot claim to be pro-life unless you support people of all walks of life.

Stop linking the tragedy of the Holocaust to flimsy political arguments.

I want to clarify some things to those who have inappropriately and selfishly tried to link the attempted extermination of Jews, disabled people, Poles, political opponents, gay men and Romani people with a medical procedure.

First, I encourage members of the Pepperdine community — specifically the person who said this — to research Dr. Josef Mengele and what he did. For those who do not know, Mengele was a Nazi scientist and doctor at Auschwitz who conducted experiments on prisoners.

He would torture twins, children, mothers, pregnant women and anyone else he was interested in. Then, while they were still alive and awake, he would dissect them without anesthesia.

Dr. Gisella Perl was a Jewish-Hungarian gynecologist taken as a prisoner of Auschwitz. Since she had medical training, Mengele and other Nazi officers forced her and other Jewish doctors to work as camp medics.

Mengele handpicked Perl to help aid in his experiments, and he instructed her to inform him of every pregnant woman in the camp. Believing her job was helpful to pregnant women, Perl helped Mengele move women to different camps because she had thought he was helping them — but this was a lie.

Realizing the true nature of what Mengele was doing, Perl promised there would never be another pregnant woman in Auschwitz.

So, to prevent the literal dissection of pregnant Jewish and Romani women, Perl would secretly perform abortions. Because of this, she earned the name of Angel of Auschwitz, and it is estimated that she performed nearly 3,000 of these secret abortions — saving thousands of Jewish, disabled and Romani women.

Never compare this tragedy to any political stance whether abortion or otherwise, because the word “Holocaust” is a unique one.

It is the Greek translation of a Jewish sacrificial offering that was burned. It means to burn something until there is nothing left. It is a word that is so inexplicably tied to the plight of the Jewish people and bound to what the Jewish people, and others, experienced under a violent, fascist regime.

To use this word to mean anything other than the attempted annihilation of those who the Nazis deemed so unworthy of life that they must be burnt to ashes is not only cruel and ignorant but also discounts any so-called cause that “promotes life.”

Though the word some have reduced the word “Nazi” as a title denoting someone who is “really, really bad or mean,” The Holocaust is not something that can be minimized.

So, perhaps the word you were looking for was genocide? To which I answer with my list of things that qualify as genocide: the violence and destruction Greek and Armenian people faced in the late 1910s to the 1920s, the treatment of the Uighur people in China today, the murders of Bosnian Muslims during the dissolution of Yugoslavia and the exile of Rohingya from Myanmar.

However, I don’t consider genocide to be a medically necessary procedure that grants individuals — specifically women — bodily autonomy and the freedom to make their own choices and decisions to have a child. To equate abortion, a medical —and sometimes necessary — procedure, with genocide is particularly barbaric.

Are we comparing the actions of those faced with the question of whether or not to have an abortion, especially late-term abortions, to the actions of Nazis? To literal war criminals?

From a young age, I was taught the importance of the words, “Never Again,” and the connotations they have for Jewish people and other victims of the Holocaust.

So, I am asking: Who’s protected by relating the Holocaust to abortion?

Referencing Micah 6:8 — the words of the Bible that both of our religions find sacred:

“This is what the LORD requires of you: Only to do justice and to love mercy, and to walk modestly with your God.”

Who is in need of justice?

Is it the thousands of children detained in cages at the border? Is it 60,000 children in foster care in California alone? Is it the 34 million people who live in poverty, unable to feed themselves or their children? Prisoners? Orphans? The sick? The poor?

Who is shown mercy?

The 16-year-old whose period was two weeks late? The man whose condom broke and didn’t realize until it was too late? The person who missed their birth control pill twice? My friend’s mother, pregnant with a fetus whose organs were growing on the outside of its body? The girl I met at summer camp whose cousin was pregnant at 13 with her brother’s fetus? The person who was raped?

Do better. Be better. Act better.