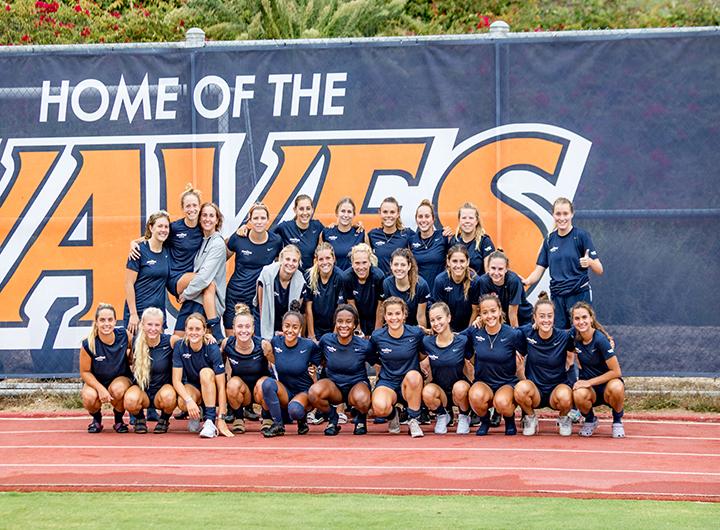 Pepperdine Women’s Soccer stands for a team photo after an early morning practice Sept. 1. Through their first six matches, the Waves are off to a flying start. Photos by Ryan Brinkman

It’s been a short turnaround for Pepperdine Women’s Soccer, who finished the 2020-2021 season April 17, and returned for the first regular season game of the 2021 season Aug. 12. From a results perspective, however, it would be impossible to tell. Six games into the new season, the Waves are off to a torrid 5-1-0 start.

“It’s a really talented group this year,” Head Coach Tim Ward said. “I’ve been doing this a long, long time and different teams have different energies, and the very specific energy of this team is a team that feels like it’s on a mission.”

Excitement to start a season is one thing; new seasons bring an air of promise and anticipation. But it’s another thing entirely when that excitement begins to manifest itself in statement victories.

Pepperdine shut out USC, ranked No. 14 at the time, 2-0 to begin the season. The Waves then traveled to San Diego State University, where they won by a comfortable 3-0 scoreline.

Ranked No. 8 after their first two wins, the Waves came back to Tari Frahm Rokus field for their home opener against Long Beach State on Aug. 26. They suffered a 2-1 loss, with two quick-fire goals from Long Beach proving too much to overcome. For Ward, the game illustrated the importance of starting well and staying focused in what the team has labeled “big five moments.”

After facing Long Beach, the Waves went back on the road for their next three games. First came a resounding 4-1 victory against UC Riverside on Aug. 29. The Waves followed that victory with 1-0 win at Lipscomb on Sept. 2, and another 4-1 win at Vanderbilt University on Sept. 5.

“I want to see the floodgates open with our goals,” redshirt senior defender Calista Reyes said, when asked about the team’s goal-scoring form this year. “I want to see everybody getting in on the action. I think a team that can have many different goal-scorers is a team to value a lot, and, to be fair, right now we have a lot of people up on the board for goals; it’s not leaning heavily towards one player.”

The Waves offense is firing on all cylinders, as they’ve fired in 15 goals, which is second most in the conference. Notably, those goals have come from nine different players.

Part of the Waves’ offensive prowess this season may stem from a change in formation. Reyes said the team has employed a 4-4-2 diamond formation, which gives some flexibility and freedom to the attacking midfielder, instead of the 4-3-3 of seasons prior.

“We’ve pretty much been training it since preseason, and we’ve kinda got to see it come to life a little bit in some of these games,” Reyes said. “There’s been moments where you could definitely feel it in the attack […] It gives us a stronger midfield I would say, and it’s given us numbers up.”

The Waves defense has also been impressive; they’ve given up only four goals this season, which gives them a respectable 0.66 goals allowed per game.

A big part of this has been redshirt senior goalkeeper Zoe Clevely, who is tied for the lead in saves this season in the WCC with 19.

“I want to credit a lot of our good score lines to Zoe,” Reyes said. “She’s just been killing it so far, and she’s come up on some big saves. Same thing with the back line.”

Pepperdine’s strong start comes despite the quick turnaround from the past year, and also disruptions to their preseason training. While Pepperdine installed new grass on their home field, the team travelled every day to Oxnard College to practice, junior midfielder Shelby Little said.

Multiple players commented the team’s success in the face of adversity comes down to the culture and attitude of the organization, which is picked up quickly by new players. The three tenets of the team’s philosophy, according to Little, are playing for a higher purpose, competitive greatness and excellence.

“The way we do anything is how we do everything,” Little said. “We focus a lot on the little things at training. Or, if you’re not on the field, how are you contributing to the people on the fields’ success?”

Looking further down the line, some familiar faces stalk the Waves’ schedule. They go to Santa Clara on Oct. 20, in what will be the first meeting of the teams since last season’s epic 4-3 home loss. Saint Mary’s (4-0-2) and Gonzaga (5-1-0) also loom near the end of the season calendar.

That’s not to say the team sees Santa Clara, Saint Mary’s or Gonzaga as the most important games on their schedule. Ward made it clear the team is focused on each game as they come, taking care of business and treating each opponent with the adequate amount of respect.

No matter who they face or what results they accrue throughout the season, Ward wants to make sure the team stays humble and keeps things in perspective.