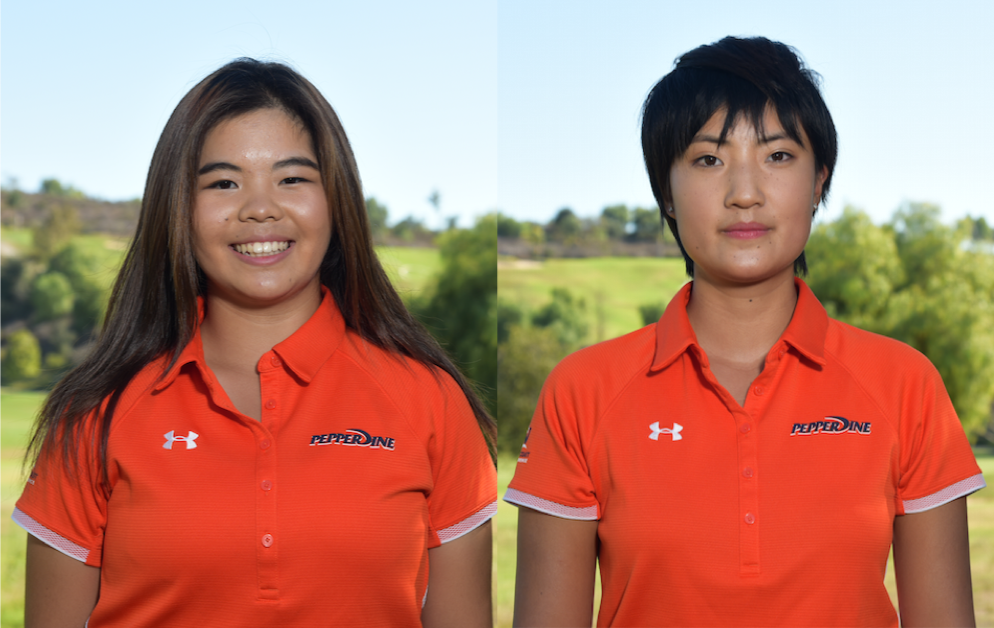 Pepperdine’s Women’s Golf team added two international freshmen to the roster this year: Kathrine Chan and Sifan He. The two freshmen join a team of two Americans, an Australian and a New Zealander.

Neither Chan nor He consider themselves to be from their actual birthplaces. Chan was born in Singapore but moved to Canada when she was six months old, and He was born in Japan but spent most of her life in China.

Playing in Canada, Chan’s golf experience is closer to an American’s than He’s. Chan played on her high school team for five years and competed for Team Canada for a year. On the other hand, He never played golf on a team before coming to Pepperdine undeclared.

“It makes me feel like I’ll always have someone supporting me because we count four scores out of five, so even if I have a bad round, I won’t affect the whole score,” He said.

Chan said the highlight of her golf career so far was being selected to play with Team Canada on their National Development Squad.

“That was one of my favorite moments because I really worked hard for that,” sports administration major Chan said. “That was when I felt really confident as an individual athlete. When I was on the team, I felt really happy because you get to have fun with your teammates and compete at high level events.”

He said the highlight of her career came in San Diego at the 2012 Callaway Junior World Golf Championships. She got second in the tournament after losing the playoff.

He moved back to Japan when she was 12 and then to Florida at 17. She played golf at IMG Academy and Saddlebrook Preparatory, but in the American Junior Golf Association instead of Florida’s normal high school system.

“Both high schools, since they were recruiting people, they couldn’t participate in the normal high school team tournaments, so I still played as an individual,” He said.

Head Coach Laurie Gibbs is no stranger to good recruiting, domestic or international.

As Gibbs enters her 26th year of coaching at Pepperdine, her newest recruits are impressing her with their transition to college golf.

“I believe they’re both going to contribute quite a bit in the Spring,” Gibbs said. “As with any freshman, it’s that adjustment period. They have to get acclimated and they’ve done a good job doing that.”

Chan said she wished she played better in the Fall, and He said she did not play with her normal confidence, but both were optimistic about the Spring.

“I feel like, with the pace that we’re going, I think that not only as a team that we can do great but individually … we could do even better,” Chan said.

Chan and He said one of their goals for the season is to make every tournament’s lineup. In qualifying meets in the Spring, the Waves can only bring four players, leaving one behind. Chan experienced being the odd woman out in the Fall, but found that the experience was not all bad.

“I spent that time working on my game and seeing what I could do better to improve,” Chan said.

Gibbs believes the freshmen will be instrumental to the team’s success this year.

The Waves tee off next at the Bruin Wave Invitational in San Luis Obispo, Feb. 25 and 26. Pepperdine and the University of California, Los Angeles co-host the meet. Gibbs said the team’s familiarity with the course will help them prepare well for the tournament.