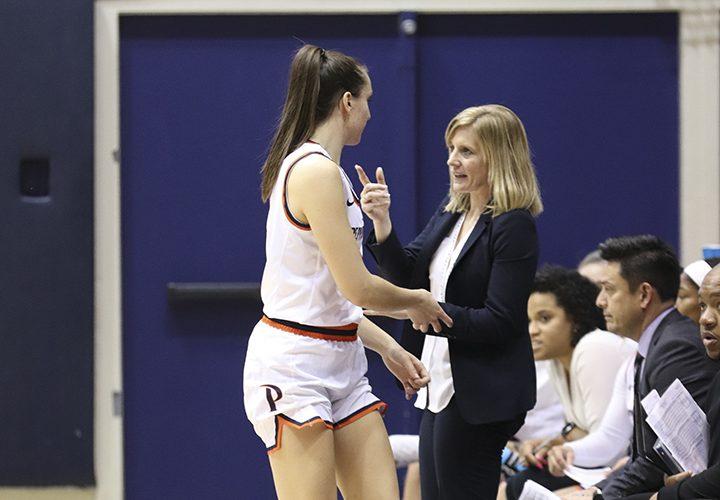 Senior forward Monique Andriuolo listens to directions from Head Coach Kristen Dowling before subbing in during a Jan. 30 game against Pacific University in Firestone Fieldhouse. Andriuolo, a returning starter, said she is hopeful for the new team to have success this season. Photo by Ali Levens

The team finished last season with a 16–15 record and an 8–10 conference record. The team then went on to the WCC tournament semifinals after beating Brigham Young and Saint Mary’s but eventually lost to San Diego.

Monique Andriuolo, a senior forward on the team, said the team plans to continue to build on the momentum from the 2020 campaign.

“We have had a few changes in our team and a lot of new people, so it is a different team,” Andriuolo said. “However, we have a few returners and the dynamic is still there for a successful team.”

Head Coach Kristen Dowling said she is grateful to be back for her second season, especially with the circumstances surrounding COVID-19. The team is ranked seventh in the WCC coaches poll and returns a few starters.

“We return three of our starters from last year, so we are returning a solid group and we are excited for the season,” Dowling said. “We have a combination of freshmen and transfers, and we had a strong finish. We feel like we have a lot to build on, so we are hopeful about the season.”

The team has been able to practice together over the last few weeks while following LA County guidelines and protocols for COVID-19. The team welcomes new freshmen and transfers who are eager to contribute to this season. 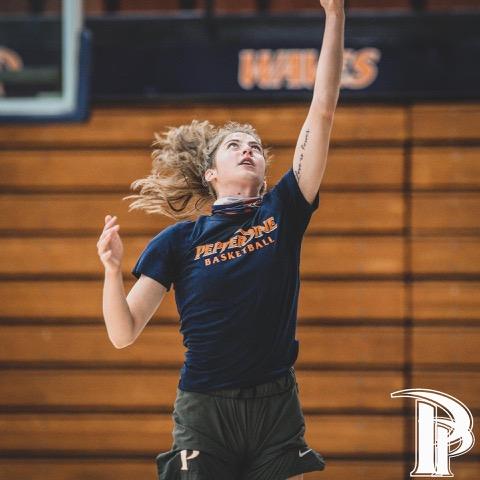 Freshman Kendyl Carson scores a layup during a bubble practice in Firestone Fieldhouse on Oct. 9. Hailing from Juneau, Alaska, Carson said the freshmen are trying to keep the same philosophy from the prior year. Photo courtesy of Pepperdine Athletics

Kendyl Carson, an incoming freshman from Juneau, Alaska, said the team is trying to keep the same feeling that the team had last year.

“I know they lost a lot of seniors, seven or eight of them,” Carson said. “We are still trying to keep the same philosophy as last year. We want to try and take what they learned and continue to grow and hopefully do better.” 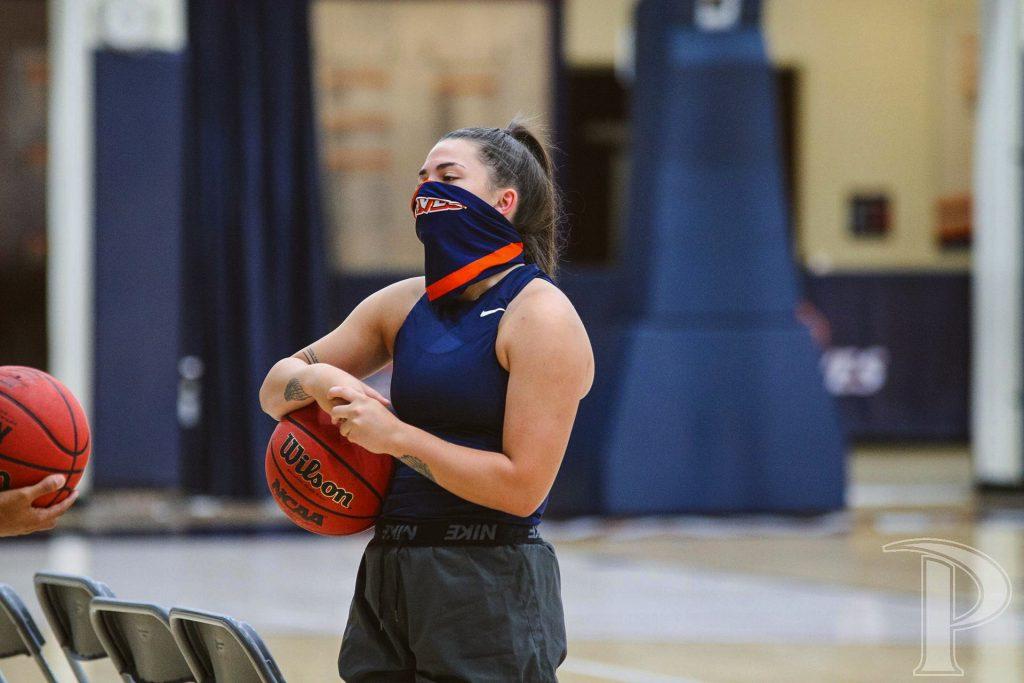 Freshman Isabel Montoya listens to a coach about plays and offensive styles during an Oct. 9 practice in Firestone Fieldhouse. Montoya said the team is trying their best to thrive under COVID-19 obstacles and restrictions. Photo courtesy of Pepperdine Athletics

Isabel Montoya, another incoming freshman, said practices and workouts have been going well despite the unusual circumstances.

“Practices and workouts have been taken more seriously,” Montoya said. “We are going harder because we are given less time. We understand as a team the restrictions and obstacles that are in our way, but we are still trying to thrive in these circumstances.”

Despite both Carson and Montoya being freshmen, both said they hope to make an impact on the team this season.

“For me, it is doing the little things, and I want to stay consistent with those,” Carson said. “There are goals for playing time, but we have certain standards on the team like communicating with my teammates and making sure everyone is working hard.”

Montoya wants to help fill the void that Sitanggan left after graduating.

“I am coming in after a great point guard last year,” Montoya said. “This year I do not want to be the drop off. I want to fill whatever role the team needs me to do and succeed at it.”

Andriuolo is looking to be one of the leaders this year as a senior, especially with a new team.

“As a senior, I think I have a big leadership role, and I am ready to help the team in any way possible,” Andriuolo said. “Obviously it is important to keep doing the same things we did last year, and I want to improve my leadership by taking a few girls under my wing.”

Andriuolo said the team hopes to advance further in the WCC tournament and make a run at qualifying for the NCAA Tournament.

“Making the tournament is always our end goal, and it would be amazing to make it,” Andriuolo said. “I want to see this team to succeed with me in it too. It’s a goal that we all want to achieve, and we have the potential to do it.”

Dowling’s said the mission as a coach is to take the program to new heights and focus on a championship mentality.

“Our mission is to develop the whole person while competing for a championship,” Dowling said. “We finished in the top four last year and bring back three starters. We want to be playing in the postseason.”

Montoya said that the incoming freshmen and transfers are focused on achieving that goal.

“We have postseason aspirations beyond the WCC tournament now,” Montoya said. “We have the goal of making the NCAA Tournament, which means we have to handle business in the WCC.”

Carson said the coaches have been emphasizing steady improvement every year.

“Our coaches want us to be patient with the time that we have, and obviously we want a WCC title,” Carson said. “It is a big goal of ours to develop a tone on how we are going to play. We want to peak toward the end of the season while keeping the same consistency throughout the year. We want to make a statement against our competitors that we are here to win.”

Lausanne Director Ezra Plank poses with his wife, Emily, and kids for their Easter 2020 photo at their home in Lausanne,...
Copyright 2013 Jupiter Premium Magazine Theme
Back to top