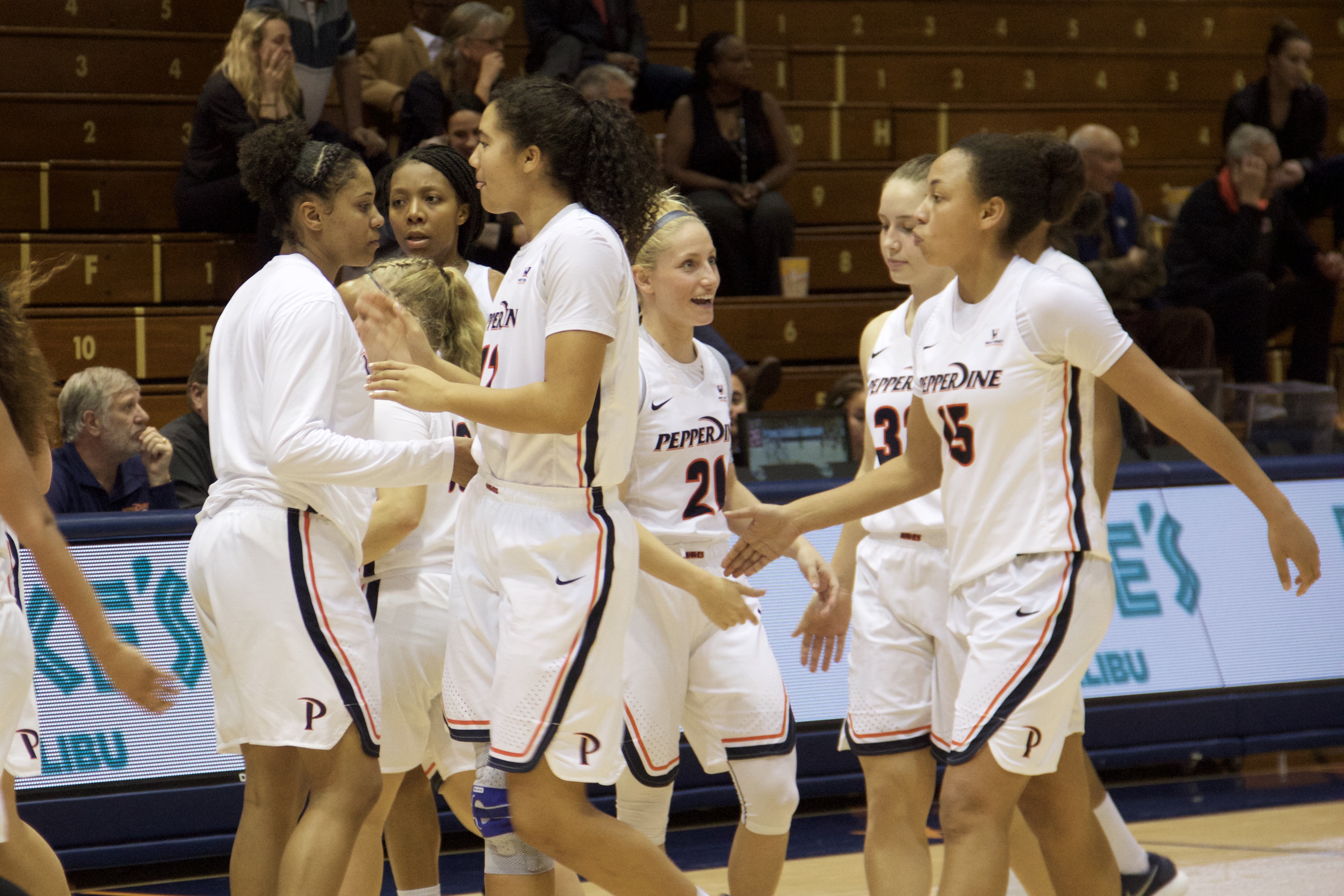 The Pepperdine Women’s Basketball team entered the final two weeks of the season with expectations to finish strong. Entering the week, the Waves faced a tough challenge against two of the top-seeded teams in the West Coast Conference, hosting top-seeded Gonzaga and taking on third-ranked BYU on the road.

Coming off an emotional 85-74 win over rival LMU on Feb. 10, the Waves looked to continue their winning ways.

“That’s always the mindset: to win,” senior guard Peyton Langston said. “We have to always keep that same focus to do whatever it takes to get the result we want, which is to win.”

Prior to the tip-off, the team honored seniors Tylinn Carter, Kim Jacobs and Peyton Langston for Senior Day.

“It’s a really special to be able to put on a Waves uniform over the last four years,” Jacobs said. “From the coaches to my teammates and fellow student-athletes, they made my Pepperdine experience so memorable.”

The Waves and Bulldogs went back and forth, exchanging baskets early on, but Gonzaga took a four point lead before the Waves cut it down to 17-16 after one. The second quarter was a close battle, featuring five ties and three lead changes. The Bulldogs and Waves entered the locker room tied at 28.

Coming out of the break, the Zag’s offense was on fire. Led by juniors Zykera Rice and Jill Barta, the Bulldogs went on a 17-7 run to lead 46-38 after the third quarter. The Bulldogs’ offense continued to roll in the fourth, taking a 15-4 run to stretch the lead up to 17, 55-38. However, the Waves offense shot 2-14 in the quarter and couldn’t rally back, falling 67-48 to Gonzaga.

“I thought we played great in the first half,” Robinson-Bacote said. “We just ran out of gas in the second, but we that we have to work on converting shots heading into the final week of the regular season.”

Prior to Saturday afternoon’s match, Pepperdine was bested by BYU on the road, 78-43 on Thursday Feb. 15. Robinson-Bacote led the Waves with 12 points and freshman forward Monique Andriuolo added seven points and eight rebounds.

BYU took a 10-0 run to start the game on fire before extending the lead to 23-7 after one. The Cougar offense continued to roll in the second, and the home team closed the half with a 39-17 lead heading into the break.

The second half was much of the same, with the Waves struggling on both sides of the ball. BYU took a 17-4 run late to push the lead up to 61-30 heading into the final quarter. The Waves put up a fight in the fourth, but was still outscored, 17-13 en route to a 78-43 loss.

On the game plan heading into the final week: “We just have to continue to stay hungry and focused,” Andriuolo said. “We have our sights set on shocking the world in the WCC Tournament and next week will be a great tune up.”

On playing the final home game of the season: “We’ve had our share of success at home this season,” Langston said. “Now, with one more home game and one more road game in addition to the WCC Tournament, we just have to be road dogs and fight with a tough mentality to get some wins.”

Pepperdine will host Saint Mary’s for their final home game of the regular season on Thursday, Feb. 22 at 7 p.m. before traveling to take on Portland on Saturday, Feb. 24 at 2 p.m. for the season finale.