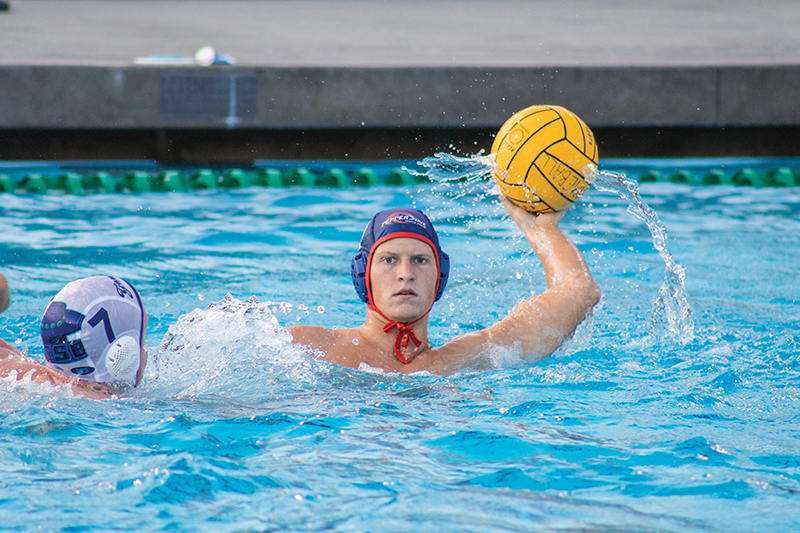 Pepperdine Men’s Water Polo is picking up where they left last season. With their terrific 2018 recruiting class already making strides in their sophomore seasons, three fifth-year seniors and a favorable schedule, Pepperdine could make a strong postseason push once again.

It’s been 22 years since Pepperdine won an NCAA title in water polo. Within that drought, the crown of NCAA champion has been in a rotation of USC, UCLA, Cal Berkeley and Stanford.

After a third-place finish in the Gold Coast Conference last season, Pepperdine is off to an 8-1 start and has already beaten the team that they could not get past at the end of the season last year: Long Beach State. Even after the near-perfect start, players feel they still have ways to go before reaching their goal.

One of those players is junior center Coleman Carpenter. Carpenter already has 49 career games under his belt. When thinking back to last season, Carpenter said he is still not happy with the result.

“I still have a bad taste in my mouth from last year,” Carpenter said. “We planned on winning it and we really had the potential too. I don’t want to make excuses because we had our opportunities. We were traveling a lot last season because of the fires. Not sleeping in our own beds for two weeks affected us, but we could have executed better.”

One of Pepperdine’s most talented players is sophomore attacker Bolazs Kosa. Carpenter had high praise for his teammate after seeing him play for the first time last year.

“Balazs Kosa is an absolute beast,” Carpenter said. “He’s a cheat code. His stats were unreal as a freshman. Every year, he’s just gonna get better and that’s scary.”

Kosa was born in raised in Budapest, Hungary, and said that playing in the United States is a completely different experience.

“The whole mentality is different,” Kosa said. “The coaches here respect and appreciate you more. The sport is then seriously here but not as serious as back home. There, we were treated like professionals, and the sport is a full-time job. It’s better in the States because of the relationship with the coaches.”

Kosa was part of a promising freshman class in 2018. He said he believes that his class is on pace for another consistent season.

“Those guys are getting better every day,” Kosa said. “We’ve all been practicing really hard. This class is good because they continually get better. Our plays are complex and take a lot of practice, my group and this team understands that we have to stay disciplined.”

Pepperdine is currently the No. 8 team in the country. They jumped the rankings by three spots after a 5-0 performance in two tournaments, the WWPA v.s. GCC Challenge Cup and the Inland Empire Classic. The Waves scored double-digit goals in every performance and had notable victories versus ranked teams Loyola Marymount and Long Beach State.

The offense has been firing on all cylinders, and the team has recorded 107 goals in nine games. Although Carpenter is more of a defensive player, he has six goals so far. Carpenter missed eight games last season with a concussion, but he said he’s happy to be back out there scoring goals.

“I’m definitely off to a better start,” Carpenter said. “I definitely have a better mindset. Last year, I was frustrated and didn’t come out the way I was supposed to. Injuries can make or break someone mentally, and my concussion taught me to move forward.”

Pepperdine boasts one of the most decorated individuals in the sport of Water Polo. Head Coach Terry Schroeder is a two-time Olympic Silver Medal winner, and he was captain of the U.S. Olympic team for 10 years and a National Coach of the Year.

Alongside him as the assistant head coach is Merrill Moses, Schroeder’s former player and captain of the 1997 championship team. Carpenter said the dynamic between the two coaches is vital to the team, and their differing styles complement each other every day in practice.

“We have two very different coaches,” Carpenter said. “Schroeder is the greatest, he’s like a wizard. He directs practice most of the time — he’s not as much of a yeller. And then Merrill played at such a high caliber only a few years ago. He’s very ferocious and loud and gets us hyped. They’re a perfect yin and yang.”

Thursday, the team will travel to Santa Barbara to face the Gauchos and Ottawa University Arizona. They will have a one day rest before Saturday, their biggest game of the season so far versus the No. 2 ranked UCLA Bruins.

Kosa said he is confident in his team’s ability going forward.

“The coaches and players have been setting a new culture,” Kosa said. “We’ve been reading books as a team and having Wednesday morning meetings to focus on the big picture. Everybody’s doing their job and it’s going to pay off later in the year.”