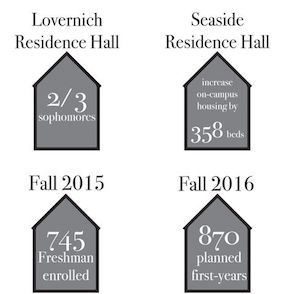 This shortage of housing opportunities for upperclassmen is impacted by the growing number of enrolled first-year students and construction plans for the new Seaside Residence Hall, which will increase on-campus housing by a net of 358 beds upon its proposed completion in fall 2018, according to Pepperdine’s website.

“As we have a larger new student freshman transfer class coming in, and we have Morgan and Dewey coming down, and we’re guaranteeing housing for first and second year students, it has pushed us into using Lovernich for sophomores,” Mathis said.

The new residence hall will be built on the site currently occupied by Dewey House, Morgan House, and the Upsilon parking lot as part of the ongoing Campus Life Project. Dewey and Morgan are set for demolition in spring 2017, reducing the number of student beds available on campus by 100. Due to these plans, sophomores cannot be housed in these buildings as in previous years, resulting in sophomores filling approximately 2/3 of the beds in Lovernich, Mathis said.

“Definitely there was a hit that was taken for juniors and seniors,” he said.

Morgan and Dewey are being used to house sophomores going abroad second semester, other semester students, and those who were in need of fall housing, Mathis said.

First-year transfer students and some sophomores are being housed in Krown Alpha and Krown Beta, which were initially expected to be used as freshman dorms, Mathis said. Rooms in these houses will remain empty for the fall semester for a “decent number” of first-year spring students.

Callie Shelley, junior and Spiritual Life Advisor for Dewey, said she was told by HRL that she would have to find alternate housing for second semester before she accepted the job.

“They notified me that they couldn’t necessarily guarantee housing for second semester just because of the unusual circumstances,” she said, noting that she was recently told about the possibility of being added to a waitlist for second semester on-campus housing. She and her roommate are also exploring other options off campus, including Calamigos.

Sophomore Alexavier Xue is living in Calamigos this year. She said that she originally wanted to live in Rockwell Towers, but found that the rooms were already full by the time she was assigned in the lottery. Rooms in Lovernich were still available, but housing in the building is more expensive than in Towers, and Xue said she decided it was too much, opting instead for cheaper housing at Calamigos. “It’s definitely not my first choice,” she said.

She said that she’s concerned about the negative impacts the construction and growing population will have, as she will graduate before she can reap the benefits. She said that as a commuter student, one big concern is the decreasing availability of parking, as Upsilon will be replaced with the new residence hall.

“I understand that they want to improve living conditions or whatever for the … freshmen or the freshmen for next year, but it definitely made it more inconvenient for us who are just becoming upperclassmen,” she said.

Dean of Enrollment Management Kristy Collins wrote in an email to the Graphic that the limited housing availability is also impacted by the enrollment of 870 first year and transfer students for fall 2016, the largest enrollment in Pepperdine’s history. According to Pepperdine enrollment records, 745 freshmen enrolled in fall 2015. The increase in enrollment is in line with the Growing Seaver plan, which aims to reach the maximum number of 3,664 students allowed at Seaver within the decade.

According to Pepperdine enrollment records, 917 first year students were originally enrolled for fall 2016 for an initial goal of 881 enrolled students. The Seaver Dean’s Office decides the size of each class, Collins wrote, while Enrollment Management determines how many students to admit based on these goals.

“We work closely with the Housing team; they have been aware of our enrollment target for many months,” Collins wrote. “In fact, I worked closely with the Dean Michael Feltner to slightly revise our initial enrollment goal due to the housing challenges.”

Enrollment goals for next year have not yet been finalized, according to Collins’ statement.

According to the housing page, HRL offered upperclassmen without housing a “priority wait list as well as a list of off-campus housing options.”

The wait list application includes questions about having a vehicle, holding an on-campus job, extracurricular involvement, and need to attend early morning or late night classes. As of Aug. 23, the wait list held a total of 313 requests, divided among Calamigos, Dewey (for fall semester), Drescher Campus Apartments (including W-block), Lovernich Apartments and George Page Apartments.

Mathis said HRL has reached out to each of the 150 students who were originally on the waitlist and confirmed that all waitlisted students either found off-campus housing or were assigned an on-campus spot.

“We’ve never had anybody that has been homeless,” he said. “They’ve always either found a place off campus or we were able to find a place for them on campus. It’s just a matter of timing.”

Junior Jared Baly spent nearly two months on the wait lists for Lovernich, Drescher and George Page after the available housing options filled up 20 minutes before his allotted time slot during the housing lottery in March. Baly said he registered for the lottery with three other people after being told by HRL that quads would receive priority lottery times.

He was eventually offered housing for the fall semester in Dewey, with no guarantee for housing in the spring. “I was excited about that but then also kind of annoyed because it was only one-semester housing and I would still have to be on the waitlist for the spring,” he said.

In early August, he was taken off the waitlist and placed in George Page, where he said he was the first person to be placed in a previously empty suite. Baly said his suite is now full, and he will be living with three other upperclassmen who were in a similar situation.

“The whole process was just a roller coaster, really. Just really stressful, especially because our school’s in Malibu where housing is not cheap off campus,” he said.

Mathis said that all rooms in George Page and are now considered filled, barring the possibility of last-minute withdrawals.

HRL also anticipates challenges for spring 2017. Housing sophomores returning from fall semester abroad in Dewey and Morgan is no longer an option, so HRL will need to anticipate student withdrawals between semesters to find rooms for these students, Mathis said.

Housing options for juniors and seniors will be increasingly limited for fall 2017, as the number of first-year enrollees will continue to increase and the new residence hall will not be complete until fall 2018.

“It’s going to be a challenge. I think next year will be really tight,” Mathis said, adding that HRL is trying to partner with more off-campus housing providers to offer more alternatives to upperclassmen.