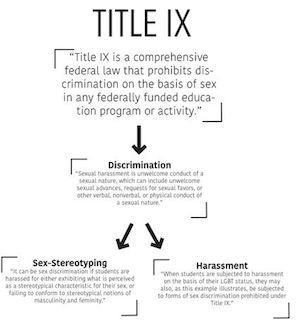 One of the biggest changes to Pepperdine’s harassment policy occurred early this year but, President Andrew K. Benton said, it will not have an affect on the operation of the university or the treatment of its students.

“People are reading way too much into this, I think,” said Benton. “Pepperdine often takes positions where it doesn’t really want any public attention just because it’s the right thing to do. I can think of a lot of legal issues where we have just resolved them or decided not to resolve them and to stay with it until we win because it’s important to us. Well, this was one that was pretty easy to decide.”

With the intention of revoking Pepperdine’s exemption to Title IX discrimination regulations, specifically regarding female and homosexual students, Benton sent a letter to the Department of Education’s Office of Civil Rights on Jan. 27, which read:

“Please accept this letter as Pepperdine University’s withdrawal of its 1976 request for an exemption from certain provisions of Title IX of the Education Amendments of 1972. The 1976 exemption request was granted by the Office for Civil Rights (OCR). Since that time, the University has not asserted its exemption. While the University continues to be controlled, within the meaning contemplated by Title IX, through its affiliation with the Churches of Christ, the University is committed to complying with Title IX.”

Pepperdine has always been compliant with all Title IX regulations as they were originally written, Benton said. With that, he said he felt this was the right thing to do and he doesn’t expect to see a change in the operation of the school or treatment of its students.

Even though he said he has never personally felt discriminated against here at Pepperdine, senior Jason Sim, the vice president of Crossroads, Pepperdine’s first LGBTQ+ club, said, “I think it was a step forward in the school and I think it’s a great decision that President Benton made, and I think it’s something that our school is going to take a lead in within the religious community.”

The original purpose of the Title IX amendment, which was signed into law by President Nixon over 40 years ago, was “to avoid the use of federal money to support sex discrimination in education programs and to provide individual citizens effective protection against those practices,” according to the Department of Justice’s website.

Sally Dunaway, a staff attorney for the Department of Education’s Office of Civil Rights, wrote in an email that “Title IX also requires schools to take steps to prevent and remedy sex-based harassment, including harassment based on a student’s gender identity or gender nonconformity. When a school knows or reasonably should know of possible harassment, it must take immediate and appropriate steps to investigate or otherwise determine what occurred.”

Pepperdine initially applied for its exemption just four years after the implementation of Title IX. Former President of Pepperdine William Banowsky, submitted the original request for exemption in 1976, which was ultimately granted in 1985. In his request he referenced certain “religious tenets” held by the university and partially cited the Title IX amendment itself.

The request also specified which sections of the amendment the university was seeking exemption from. These included that “Pepperdine University reserves the right to take disciplinary action without regard to sex against persons determined by the University under its established procedures to be involved in heterosexual relationships outside the holy union of wedlock or in homosexual relationships.” It also requested the right to exclude women from all programs designated for students preparing for the preaching ministry. Including loans, scholarships, awards, employment assistance, and also “the leading of devotionals in mixed audiences in daily chapel, the annual lectureship, or similar programs.”

Sim said it was a little concerning that it took so long for Pepperdine to withdraw the exemption but knows that the country, as a whole, is “slowly, step by step, moving forward.”

Benton said that, until recent events brought it to his attention, he wasn’t aware Pepperdine had such an exemption, but added that he understood Banoswky’s acquisition of it more than 30 years ago.

Edna Powell, chief business officer and Title IX Coordinator, said she supported Benton’s decision but also anticipated at least some resistance from outside the university.

“I think there are always going to be some who oppose [the withdrawal] and feel that you are going the way of the culture, or something like that,” she said. “But I feel, that for the majority, and when it comes to the Christian faith, it comes down to love and acceptance … it’s not some rule that we just write down, we’re talking about people.”

As Pepperdine moves forward with its exemption withdrawal, a bill is making its way through the California State Senate that will regulate the approval and visibility of these types of exemptions. As of Aug. 19, SB 1146 has made its way through its third senate reading and, as the bill stands now, if it ultimately passes it will do two things:

Firstly, it will require any institution in California that has a Title IX exemption in place to “disclose to current and prospective students, faculty members, and employees the basis for claiming the religious exemption and the scope of the allowable activities provided by the exemption.”

Secondly, it will require those same institutions “to submit the aforementioned material relating to any claimed exemption to [the California Student Aid Commission] and requires CSAC to post this information on its Internet Web site.”

These two requirements are the result of a number of amendments to the original bill which was proposed on Feb. 18, less than a month after President Benton’s letter became public.

Regarding the proposed requirements of SB 1146, Benton said, “I think a faith-based institution ought to say exactly who they are, because I think ‘bait and switch’ has no place in American higher education,” he said. “And I think when you come to this campus, this is a faith-based institution, don’t be surprised that there are Christians and a lot of other religions present on this campus. The cross out front means something.”

Another turning point in Title IX regulation came on May 13 in the form of a “Dear Colleague” letter, sent from the Obama Administration to schools across the nation. The letter did not include any legal requirements but instead advised schools on how to deal with Title IX regulation issues regarding transgender students. The overall message of the letter was that the Title IX amendment should be read in such a way that it includes prohibition of discrimination “based on a student’s gender identity, including discrimination based on a student’s transgender status.”

When it comes to transgender students, Benton said Pepperdine, and the State of California, maintains an overall “awareness” that keeps them at the forefront of this debate, a “bellwether” in the ongoing discussion about gender identity in higher education.

Pepperdine’s continued discussion concerning LGBTQ+ relations has included a number of significant changes over the past year. As of Spring 2015, Pepperdine saw the commission of the first LGBTQ+ club, “Crossroads,” and is employing its first openly gay faculty member as well. The university is also currently engaged in a sexual discrimination lawsuit, filed Dec. 2014 by two former female basketball players who claim they were harassed by their coach for being in a lesbian relationship. Pepperdine attempted to have the suit thrown out on the grounds that this was not a Title IX violation, but the court ruled against them.