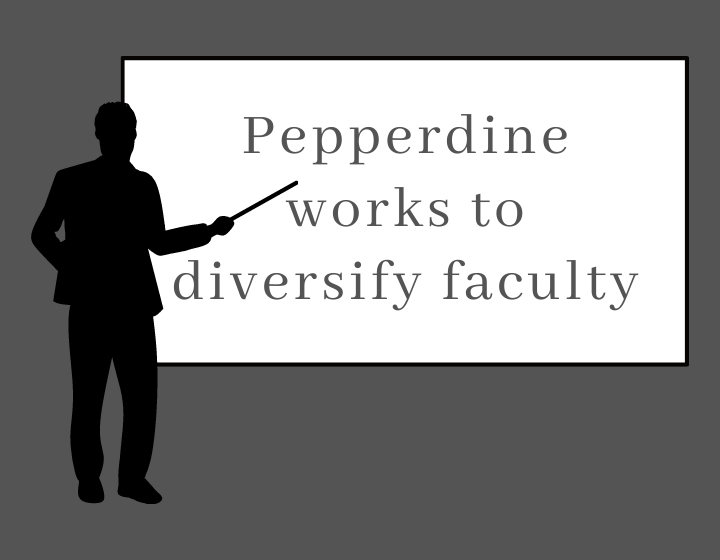 Editor’s Note: In referencing the sources’ races, Roshawnda Derrick prefers to be referred to as Black. David Holmes did not respond for comment but referred to himself as African American during the interview.

This year, Pepperdine University announced its recommitment to racial equality and increased diversity on campus, including the goal of building an ethnically diverse and gender-balanced faculty and administration.

“Unfortunately, we don’t have the number of faculty of color to keep up with this changing student body that we’re having at the university level,” said Roshawnda Derrick, assistant professor of Hispanic Studies. “Students are expecting more training in diversity, cultural competence, being global citizens — those are some of the things that we say that we promote — but we don’t actually have faculty of color who are representative of students in the same way.”

Why are There Less Faculty of Color at Pepperdine?

David Holmes is the dean of the College of Liberal Arts and Sciences and an English professor at Lipscomb University. Holmes taught at Pepperdine for over 25 years and also served as associate dean for Curriculum and General Education before leaving in 2019. After beginning his career at Pepperdine in 1993, Holmes was the first African American tenured professor and the first African American to be promoted to the associate dean level.

“African Americans are a smaller demographic in Church of Christ schools, so they’re less likely to get promoted to full professor in administration,” Holmes said. “The issues are not only retention — and you should retain the faculty of color — but also, will they get tenure? And will they be promoted to the level of full professor or an administrator?”

Holmes said while he feels Pepperdine needs to hire more faculty of color, he understands the University can only select from the professors available. In the 2014–2015 school year, 108,912 white people earned doctoral degrees, compared to 13,278 Black people, according to the National Center for Education Statistics.

“Pepperdine’s challenge is a challenge related to the history of racial discrimination,” Holmes said. “In other words, you don’t have enough people who are available, not only because they have to have that experience, but because historically, we have undereducated and marginalized our people of color.”

Holmes said while he doesn’t think Pepperdine is consciously trying to exclude faculty of color from working at the University, the administration’s goal of diversity cannot be met until the University addresses its history of institutional racism is.

Stanford University’s research on implicit bias “suggests that people can act on the basis of prejudice and stereotypes without intending to do so,” according to the Stanford Encyclopedia of Philosophy. Pepperdine Provost Rick Marrs said implicit bias is something he has to remain aware of, and fight through, when looking to hire new professors.

“It’s very, very hard — if you’re not always thinking about it — that when you’re looking at candidates, the more people are like you, you just sort of have a tendency to think the more impressive they may be,” Marrs said.

Derrick said as a Black professor, she faces the added barrier of being held to different standards than her white counterparts. Derrick is the only Black professor in the International Studies and Language division at Seaver.

“That’s the reality of the situation no one tells you when you’re a Black PhD student — the only one in your department, as usual — no one ever trained you for, that part of it that has to do with race,” Derrick said. “That has to do with the body that you come in, and how people are going to perceive that that has nothing to do with your training, your research, anything that you’re skilled in — it just doesn’t matter.”

A 2010 study published in the Journal of Diversity in Higher Education echoed Derrick’s sentiments. Researchers gave high school students CVs for several professors, whom they had not yet met, of varying races, genders and academic disciplines. Researchers asked the students to examine the CVs and to then rank the professors based on their perceived competency, legitimacy and interpersonal abilities.

Holmes said during his time teaching at Pepperdine, he often incorporated teaching elements rooted in his experience preaching at and attending a predominantly Black church. Holmes used traditional call-and-response tactics to engage the class when he thought students were tired or confused, but he said someone unfamiliar with his culture could misunderstand these strategies.

“If you had a really strict supervisor looking at that, and they just passed by purely during the time I was doing that cultural exercise, they may think I was being either less than professional or not rigorous enough,” Holmes said. “They might judge my cultural practices outside of a larger context.”

Derrick said when she finds herself in professional situations where she is the only Black person, she can feel pressured to educate others on the issues facing the Black community.

“You don’t want to make it a race thing,” Derrick said. “You don’t want to have to advocate for yourself with people, but it’s the constant reality of everything that I do in this field — because I’m always the only one in the room with everybody else who’s not like me.”

Asking faculty of color to serve on too many committees, especially diversity committees, may take time away from their academic pursuits, Marrs said.

“If you’re a faculty member of color, if you’re not careful, you get pulled to be on a lot of committees,” Marrs said. “That’s good, but that takes time away from your scholarship. One of the things we’ve tried to do is to protect younger faculty, and faculty of color especially, to make sure they get their research agenda going so they can have a successful tenure review.”

While race was not a determining factor in Holmes leaving Pepperdine, Holmes said he often experienced microaggressions and negative interactions with police with teaching in Malibu. Holmes said Pepperdine should take these exchanges into consideration, especially regarding younger professors of color who have not been teaching as long as he has.

“I know Pepperdine’s working on this; you have to be very careful about new faculty who are on the margins,” Holmes said.

Marrs said Pepperdine is working to make Seaver College more inclusive and wants to be sure professors of color are given equal consideration to white professors during the hiring process.

“Because of our mission, we do tell search committees that for them to have a complete pool, every candidate pool should have a person of color, a woman, someone who’s from the Church of Christ,” Marrs said. “We tell them also that we want them to pick the very best candidate, but we’ve developed best practices for faculty hiring.”

Marrs said one way Pepperdine hiring committees can recruit more professors of color is appealing to areas they might specialize in.

“It’s not enough to simply say, ‘Hopefully, people will apply,’” Marrs said. “If you’re really wanting to fill particular areas in your division or department, you can put things like, ‘We especially encourage faculty members who are researching X, Y or Z,’ and those might be areas that are not exclusively — but that traditionally would be — research areas that the faculty of color or women might be researching.”

An important distinction to make, however, is that a person should not just be hired solely for the sake of diversity, Derrick said.

“We have a rich, diverse group of folks here,” Derrick said. “And that should be seen, and I don’t think it’s often seen. But I don’t think that means just because one person of color applies to the job that they should automatically get it.”

Marrs said the University wants to become a place where faculty of color feel cared about and important. Marrs said he is learning how to cultivate an inclusive culture at Seaver College by utilizing resources from the Education Advisory Board, a Washington, D.C.-based firm that guides educators toward best practices at their universities and hosts conferences every year.

“One of the things we’ve been looking at is what they consider best practices for new faculty of color — how to help them become much more a part of the community and feel like they’re being supported,” Marrs said.

Derrick said she is trying to help professors become more skilled at teaching to diverse classrooms and communicate better with each other by co-leading the Seeking Educational Equity and Diversity project. The SEED project teaches professors diversity training and appropriate and inclusive language to use in the classroom, among other practices, Derrick said.

“We continue conversations about diversity, equity, inclusion, social justice, how we can make Pepperdine a better place,” Derrick said. “One of the things that we’re talking about right now is how can we band together to show we’re supportive of this new chief diversity officer. That’s something we’re all really passionate about — making them know that they have a community, they have people who support them, that they have people whom they can ask questions about institutional knowledge.”

The Importance of Diversifying Faculty

Students feeling marginalized within the larger Pepperdine community can benefit from learning from a professor who identifies the same way that they do, Derrick said.

“Most people have never seen a Black woman teaching a Spanish class,” Derrick said. “For people of color who are usually the minority in the situation, it is helpful just to see another face doing some of the things that you would like to do.”

Derrick said Pepperdine doesn’t necessarily have to send its students abroad to help them become global citizens and prepare for life in the working world.

“It’s just so important to have that diversity,” Derrick said. “If we’re actually trying to create global citizens, let’s start at the university level instead of just sending people across the country or to another country for our study abroad experience. Let’s do that here.”