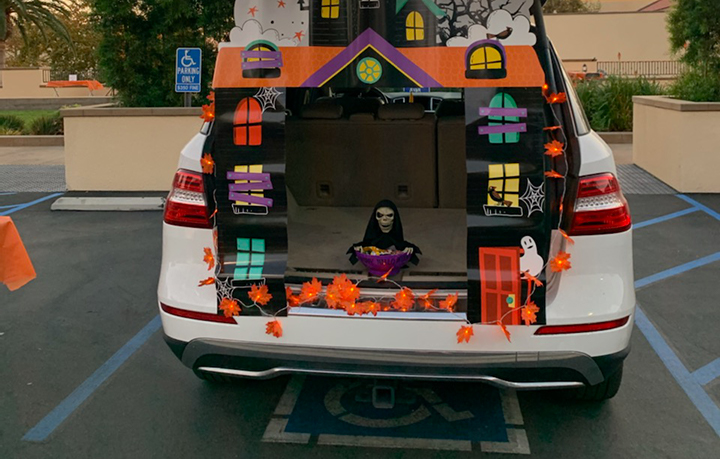 Photographs posted on Instagram of The Board’s Trunk or Treat event stirred controversy as members of The Board posed in front of Halloween-decorated cars parked in handicap spots.

The event, held Saturday, Oct. 26, in Smothers Parking Lot, took up eight handicap spots and had 11 “replacement” handicap spots alongside the front of Smothers Theatre. Board members Isabella Teague — who a is junior and anchor on the Graphic’s GNews — and Rachel Stull, sophomore, planned the event and said The Board had no intent to discriminate against disabled students.

“We are also students part of the Pepperdine community, and by posting these photos, there was never any attempt of malicious harm, or trying to show off our ableism,” Teague said. “We did not aim to discriminate against any certain persons or groups.” 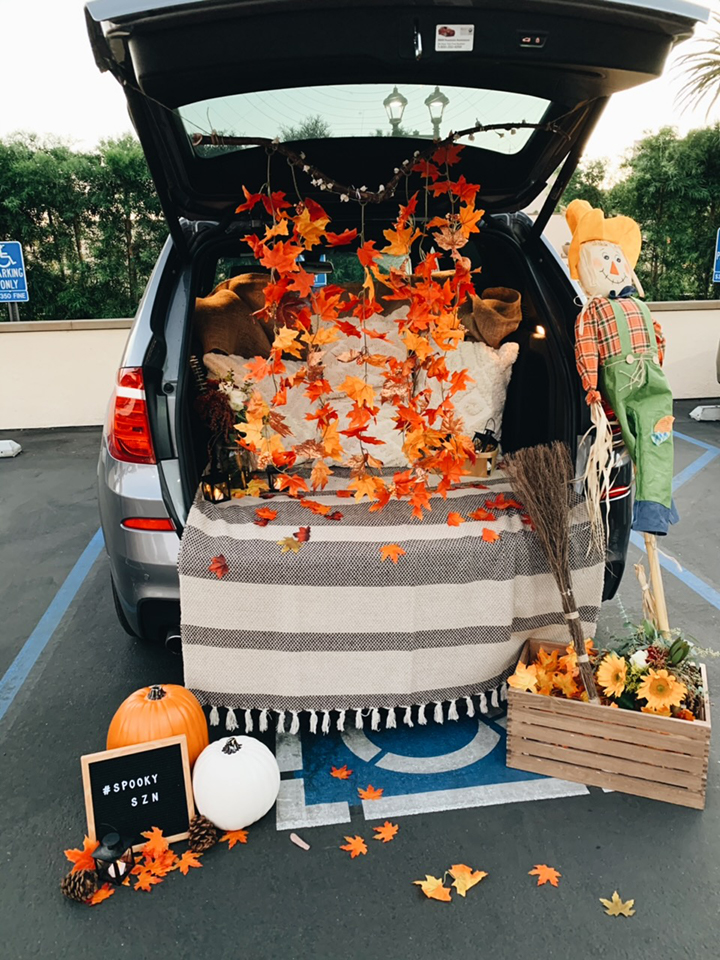 A Board members car parked in a handicap spot in Smothers Lot for ‘Trunk or Treat.’

Alumna Lauren Waller (2017) questioned why the event had to take place in handicap spots. Waller said she noticed the cars in handicap spots while she was leaving work Saturday. She then told The Board members in person that she did not think they should be parked there and made a complaint to DPS. Waller also commented underneath The Board’s Instagram photo Monday, Oct. 28.

“When a friend of mine sent me The Board’s Instagram post, I was incredibly frustrated with not just The Board, but also with DPS,” Waller said. “I commented because I want able-bodied people, like myself, to actually speak out against ableist behavior — that burden shouldn’t fall only on disabled individuals.”

Board member and senior Kelly Warren was setting up for “Trunk or Treat” when Waller brought her concern to The Board members in person.

“We called DPS right away before the event started and had them come down to double check that the spots were properly allocated and that we were okay where we were set up,” Warren said. “They gave us another final stamp of approval and said, ‘Everything looks OK.'”

Since Monday, the Instagram post has generated over 60 comments and a statement from The Board. Senior Mackenzie Mazen — who attended ‘Trunk or Treat’ — recently spoke out against on-campus discrimination for disabled people and commented on The Board’s response statement. She said it was disappointing and frustrating. Mazen has Ehlers Danlos syndrome, which makes walking long distances difficult.

“My problem with their statement was how they talked about that they considered removing the handicap spots,” Mazen said. “It’s just funny to me that they thought this out thoroughly, and they still chose to go forward with it. Like no one on The Board said ‘maybe we should just move it to the regular parking spots.'”

Members of The Board said there were a few reasons the event was held in the handicap spots in Smothers Lot. The first was for electricity: outlets located near the spots were needed for the speaker, Teague said. Upper Mullins was chosen because it is more accessible than Rho Parking Lot or Alumni Park, she added.

The other main reason for the handicap spots was to follow safety protocol, Warren said.

“The protocol is we try to keep it to the smallest space possible,” Warren said. “You don’t want an event across a parking lot because then that’s a hazard to have moving vehicles where you’re telling students to walk. If we would have used a different spot, then students would have had to go through a road where cars could have been driving.”

Unlike a majority of the Instagram comments, alumnus Joshua Prits (2019) wrote on Instagram The Board’s decision to reserve the handicap spots was not an issue, and commenters’ energy should be put into fighting for people of color or LGBTQ+ rights.

Mazen responded to Prits’ comment saying it is important for minorities to support one another, and as a student with a disability, it is an issue.

“[Prits’] comment was so interesting because said, ‘Oh this isn’t a real issue’ and I’m like, great for you, it might not be a real issue,” Mazen said. “But for me, this is a very important issue that affects my life every day. I think people forget that you can care about more than one thing at any given time.”

For future university events, Waller said student groups should not be able to reserve handicap spots.

“I think The Board should include disabled people in this conversation when planning future events,” Waller said. “I also think DPS should issue some sort of apology as well for allowing them to reserve those spaces to begin with instead of reserving non-handicap spaces.”

When a handicap space is displaced, DPS will use a minimum of one and a half regular-parking stalls for the relocated accessible space, Director of Public Safety Dawn Emrich wrote. Warren said The Board will continue to yield to the universities guidelines.

“Although this has caused a big commotion from the students and from alumni, they are not the people that have jurisdiction over student groups — that’s ultimately the administration and DPS,” Warren said. “If we do something against their guidelines, then we risk being shut down.”

Stull apologized on behalf of The Board for the controversy the event caused.

“We’d like to apologize for all the emotions this brought up and the reaction,” Stull said. “That was never our intention.”

The Board sends out monthly surveys asking for feedback and suggestions, Warren said. The Board’s adviser Louise Dequilla wrote in an email statement that the feedback will be shared with the university.

“We are grateful for the student feedback, which has given us the opportunity to listen, share the feedback with University administrators, and carry out future actions that best serve all of our students,” Dequilla wrote.