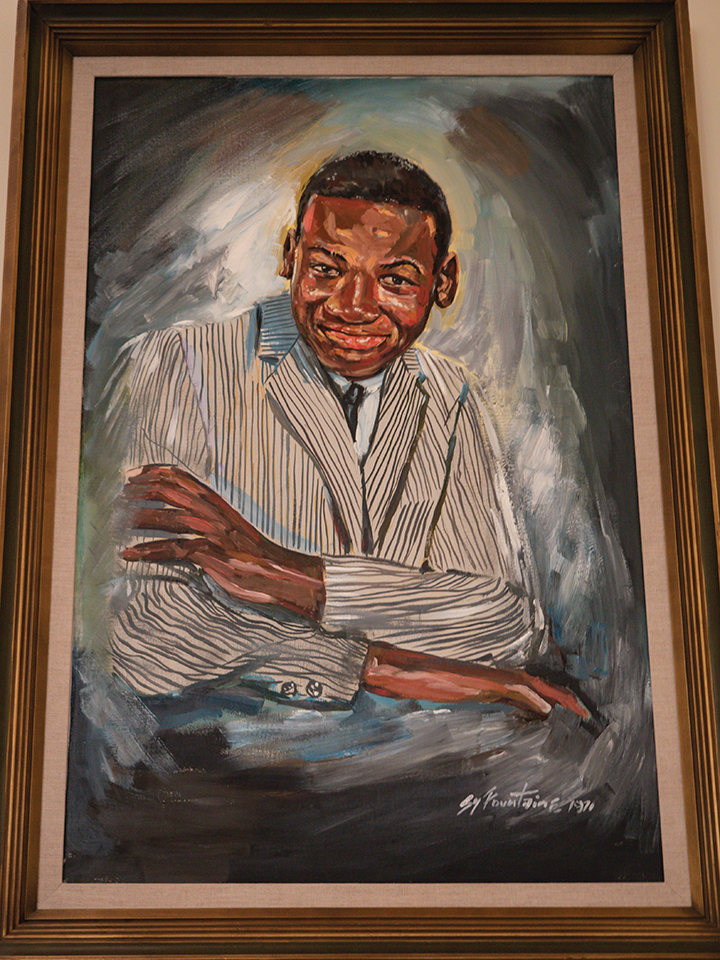 Dozens of Pepperdine students and faculty members wore all black clothing Tuesday, March 12 to honor the life of Larry Donnell Kimmons and remember the 50th anniversary of his tragic death.

On March 12, 1969, a Pepperdine security guard shot and killed Kimmons — an unarmed, 15-year-old African-American — when he tried to use the gymnasium basketball courts on the original George Pepperdine College campus in South Los Angeles.

“[Kimmons] did not deserve to lose his life that way, and I think it’s really, really important to his memory, to his legacy and to his family that we continue to remember him and continue to spread awareness to what happened to him so history won’t repeat itself,” said Shanelle Wilkins, a junior and member of the Black Student Association (BSA) who chose to wear black.

Kimmons, whose mother had previously received permission for him and his friends to use the basketball facility, was an honors student at Washington High School in Westmont, CA. Now, a painting of him hangs on the first floor of Payson Library.

“When I look at Larry Donnell’s [Kimmons] portrait in the library, I see my brother, I see my father, I see my cousin, I see people who are members of my family, my friends,” Wilkins said.

Wilkins, who finds the Kimmons shooting especially personal since it occurred in her hometown, said although many students and professors are aware of Kimmons’ death, it is still “hidden” from many.

“People should be aware that all of us are kind of benefitting from this campus and from this space as a result of what happened to him,” Wilkins said.

In a letter posted to social media and spread throughout the Pepperdine community, the BSA defined its decision to encourage everyone to wear black “as an act of memory, solidarity and mourning” for a life cut short and as an invitation for students to reflect on “how we of the best intentions also participate in injustice.”

Reactions to Kimmons’ death ranged from violent revolts among students to a list of demands from the Black Students Union. Just as the horrors of March 12 fueled racial conflict in the surrounding community during the late ’60s, Rahje Branch, alumna (2017) and former BSA co-president, said the 50th anniversary of one of the darkest days in Pepperdine’s history reminds us that racism is still present in today’s society.

Although many people say they want to return to “the good old days,” Branch said remembering this anniversary serves as a reminder that for many black students, doing so would be highly disadvantageous. She said she hopes this act of solidarity will remind Pepperdine administration and faculty of their obligation to remember and inform others about Kimmons and the countless others who have been killed as a result of white supremacy.

Professor Paul Contino, who wore black and dedicated the first few minutes of his classes to raising awareness about the anniversary, wrote in an email that students and faculty can continue to honor Kimmons by following God’s command to not be afraid.

“If ‘perfect love casts out fear’ (1 John 4.18), we are called to reject the fear that difference or ‘otherness’ can sometimes elicit — a fear that some these days, sadly try to manipulate and fuel,” Contino wrote.

Contino emphasized that, in light of this past event, faith calls members of the community to foster deeper relationships with each other and be more attentive to the struggles of those around them.

“[The anniversary of Kimmon’s death] reminds us of our connection to others, and our responsibility to remember those whose suffering has, in some way, allowed us to enjoy the many gifts we do enjoy, especially here at Seaver College in Malibu,” Contino wrote. “We are connected by our common humanity and … we are each responsible to all, for all.”

David Humphrey, associate dean of student affairs for diversity and inclusion, said the issues of yesterday are still occurring today and when the community realizes this, it also realizes its responsibility to change deeply rooted racial inequality.

“To remember Larry Kimmons and to lament, but also commit ourselves to pursuing a life of justice refuses to accept that narrative as normative,” Humphrey said. “It is our responsibility to engage in the ministry of reconciliation, justice and peace-building and seek to affirm the dignity of each individual.”

Sources agreed that although remembering Larry Kimmons on the anniversary of his death is one step forward on the path to social justice, it is also paramount to remember every day of the year.

“It’s important for us to remember this because it is a part of our history, and we have to resist the temptation and resist the seduction to remember only the good things,” Humphrey said. “It’s only through remembering even those tough and uncomfortable moments that we’ll be able to grow and learn from our past mistakes as an institution.”