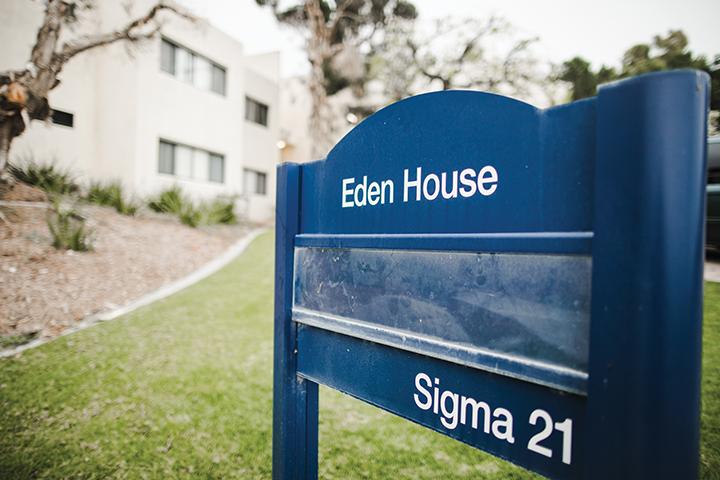 When the Eden Project officially opened in Sept. 2015, Pepperdine saw a bright future for its new sustainability residence, according to Chris Doran, founder and coordinator of the Sustainability minor. In the past three years, however, the project has encountered significant challenges and setbacks.

The Eden Project was a result from the Center for Sustainability and a committee of faculty, staff and students who submitted a grant proposal to the Waves of Innovation Committee. They were awarded the top prize of $150,000 to launch the Eden Project in 2014.

Doran, one of the lead stakeholders of the Eden Project, said as time went on, the Project failed to fulfill its original vision. 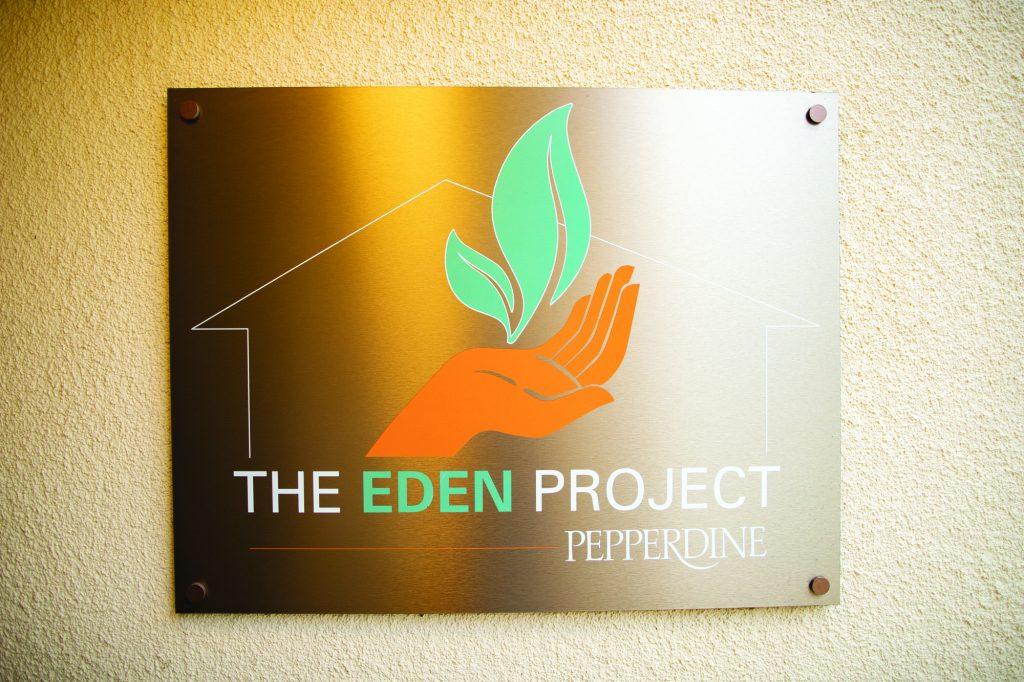 A sign next to the entrance of Eden House announces the project to incoming visitors.

Doran wrote the Waves of Innovation grant proposal along with Rhiannon Bailard, the previous founding director at the Center for Sustainability. Doran said the current state of the Eden Project is nothing like what he and his colleague proposed.

“Frankly, I wish they would stop using the Eden Project designation because I don’t think it’s really being faithful to what the original project was supposed to be,” Doran said.

Originally a Residence for Sustainability Minors

Doran said in the original proposal, the Eden Project was supposed to be a dorm for freshman or sophomore Sustainability minors; however, it now also includes transfer and sophomore students who are not.

Senior Buddy Kennedy is an SLA at Eden and the RA during the 2018–2019 school year. He wrote in an email that Eden was a transfer house then and is now a mix of sophomores and transfer students.

Director for the Center for Sustainability Camila Pupparo said when Eden first opened, the students self-selected to live there because of their interest in sustainability.

“It was still supposed to be freshmen or sophomores who were sustainability minors, and without Rhiannon or my approval, HRL decided to make it a transfer dorm,” Doran said.

Pupparo said as of fall 2018, students were no longer able to self-select Eden as a house, a step away from the original vision of being a residence for Sustainability minors.

“[This] really stifled some of the momentum that we had because the original idea was to get a group of sustainability students living together and then allow them to foster a new type of community,” Doran said.

Maura Page, director of Residence Life, said the decision for Eden to not specifically house Sustainability minors occurred before she came to Pepperdine, so she doesn’t know why the change was made.

Pupparo said she thinks Eden became a non-Sustainability-minor house due to a high demand for student housing.

“Another challenge was just the reality that we needed to have that space be utilized for the entire student body,” Pupparo said. “So it wasn’t necessarily self-selected sustainability minded for students.”

Page confirmed that many of the original people from HRL involved with the Eden Project have left Pepperdine; therefore, it was difficult to help maintain the Eden Project.

Kennedy said in a later interview that since its opening, the Eden Project’s many initial sustainability features have stopped working or have been removed due to a lack of functionality.

“The Eden House originally had a lot of really cool sustainability features, and then as the years went on, they started to be taken away either from lack of upkeep or lack of functionality,” Kennedy said. 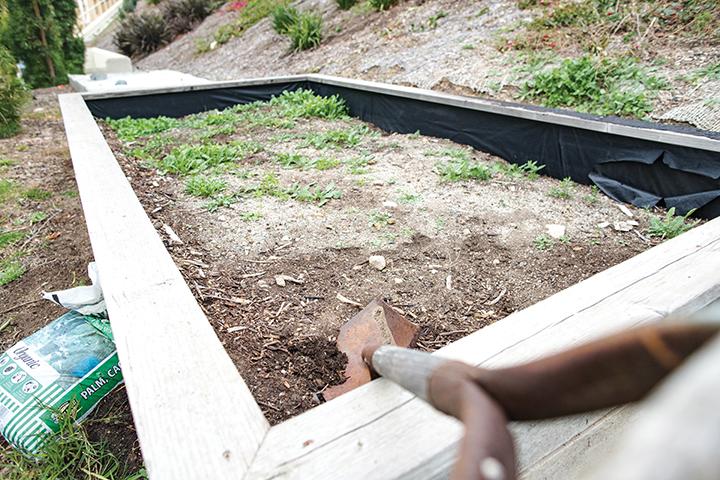 Doran said the original plan was to use the information gained from the Eden Project to inform what features would be implemented in other residences.

However, Eden no longer has a composter, a biofilter plant wall or a functioning garden, to name a few of the features that did not last.

“If you come into the lobby, there’re all these panels on the wall that tell what the Eden Project is about, and I’d say about half of them that are on the wall no longer exist,” Kennedy said. 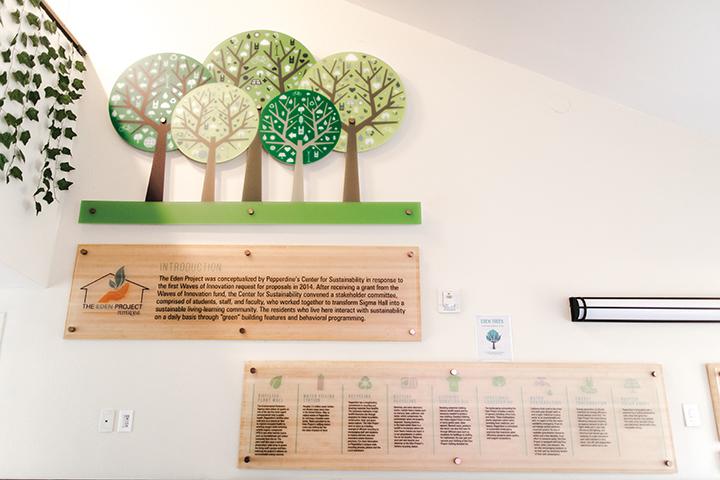 Pupparo also spoke of a biofilter plant wall that was intended to purify the air in an organic way. However, it was difficult to maintain, as a student had to manually water the plants, and issues with irrigation came up.

“This is actually one of the perfect examples of something that was really great in theory, but in practice, it was really difficult to maintain,” Pupparo said.

Another feature was a touch screen that displayed all of the water and energy usage in the house and compared the data against Eden’s two neighboring dorms.

“At the time, they had multiple contests and incentives to get residents from all three dorms, not only Eden, to reduce their usage, and so that was successful,” Pupparo said.

The screen stopped working in 2018 when the neighboring dorms were demolished to make room for Seaside Residence Hall. Pupparo said the Center for Sustainability decided against installing new comparison meters in other dorms due to costs and ultimately decided to remove the screen.

Pupparo said she hopes to implement the screen feature in future construction projects because of how impactful it was when it was functioning in Eden. She also mentioned a few other successful features the project brought to light, including LED fixtures and induction cooktops. 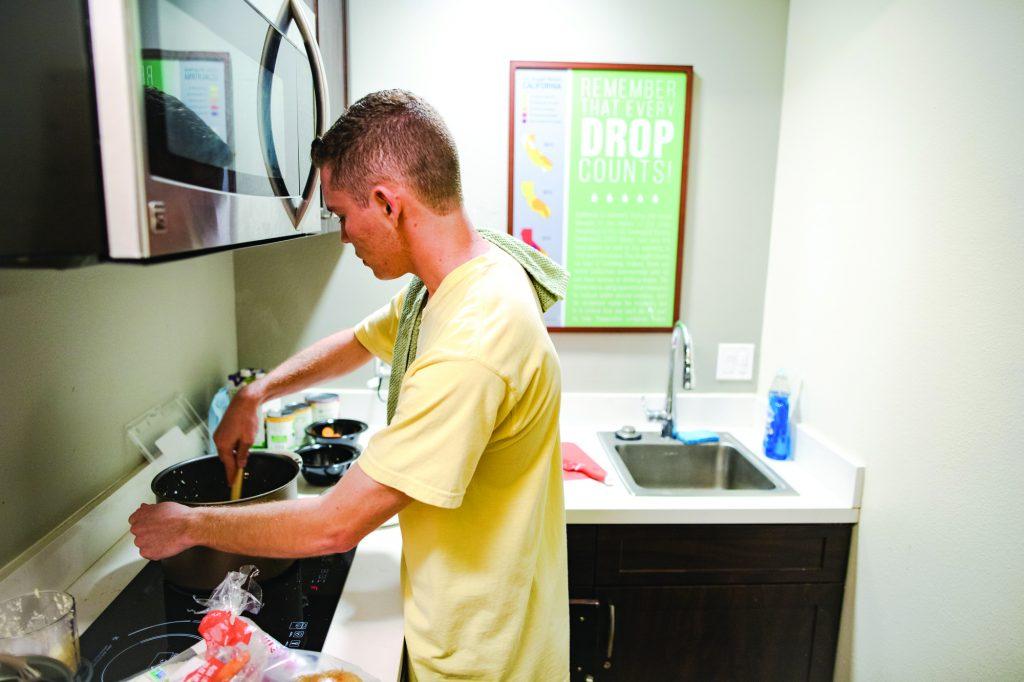 “Eden was one of the first times that we tried our magnetic base technology on the cooktops, and that’s what you now find in Seaside,” Pupparo said. “[Induction stove tops] use an electromagnetic technology to heat the cookware and its contents without wasting energy heating the surface itself.”

Pupparo said these successful features were also implemented in Seaside.

Jolie Lowe, junior and co-RA of Eden, said none of her residents are sustainability minors; however, they have been receptive to learning about the purpose of the house.

Lowe and her senior co-RA Daniel Zarasua both said they have not heard from the Center for Sustainability or HRL regarding communications about sustainability efforts in the house.

“I kind of approached Eden as more of the transfer house rather than the sustainability house,” Zarasua said. “From my point of view, I got hired as an RA.”

Senior Lauren Lee was on the Eden triad from 2017 to 2019. In her two years, she said there were two sustainability representatives — students living in the house hired by the Center for Sustainability — who were responsible for promoting sustainability to residents and maintaining the sustainability features.

After the spring of 2018, Lee said there were no longer any sustainability representatives at the residence. However, Page said the Center for Sustainability provided the funding for sustainability leaders to live in Eden prior to 2018.

Pupparo said she thinks in the initial years of the Eden Project, when students could self-select in, the RAs and SLA recruited a resident to help maintain some of the features, like the garden or the plant wall. In later years, a student intern from the Center for Sustainability took care of the plant walls and other sustainability features, but the intern did not live in the dorm.

Prioritization of Sustainability at Pepperdine

Doran agreed with Lowe, citing the dormitory’s carbon output as one of its larger footprints on campus.

“It’s sad considering the lack of sustainability program we have across the college to begin with — and particularly in housing,” Doran said. “I think it’s kind of sad that we don’t do that from lots of perspectives, but it’s particularly sad considering we were trying to move in that direction and the ball fell.”

Lee said she had a resident who transferred from another university who was surprised that the Eden Project was “Pepperdine’s most sustainable-type thing.”

“We think of Eden as the upgrade freshman house — it has all these cool features — and she’s like, ‘I had all of this in my regular dorm. […] This is kind of expected,'” Lee said.

Doran echoed Lee about how Pepperdine is behind in sustainable features in housing compared to other schools.

“We don’t have any programming to talk about energy reduction or food waste reduction or some of the other things that lots of schools in our area already are doing,” Doran said. “We’re just so far behind the rest of not just the schools in the LA area but around the country.”

Pupparo said she thinks a major reason why Pepperdine’s housing may not be up to date compared to other universities has to do with limited resources and how the campus was built in the 1970s.

“It’s easier said than done to retrofit all of the buildings on campus, and so it’s a slow process,” Pupparo said. “I think it’s very important to stay realistic and figure out, okay, what worked really well, what didn’t and how do we make that specific thing better. I think [Eden] served as a very good example of a microcosm of sustainability.”

Page said the future of Eden is limited, saying that eventually, Eden will no longer house students. Page would not give further details on her statement.

However, Page said in the near future, HRL is working with Connie Horton, Vice President for Student Affairs, and Pupparo on integrating a sustainability theme in the rest of the house to focus on increasing both personal and environmental awareness. 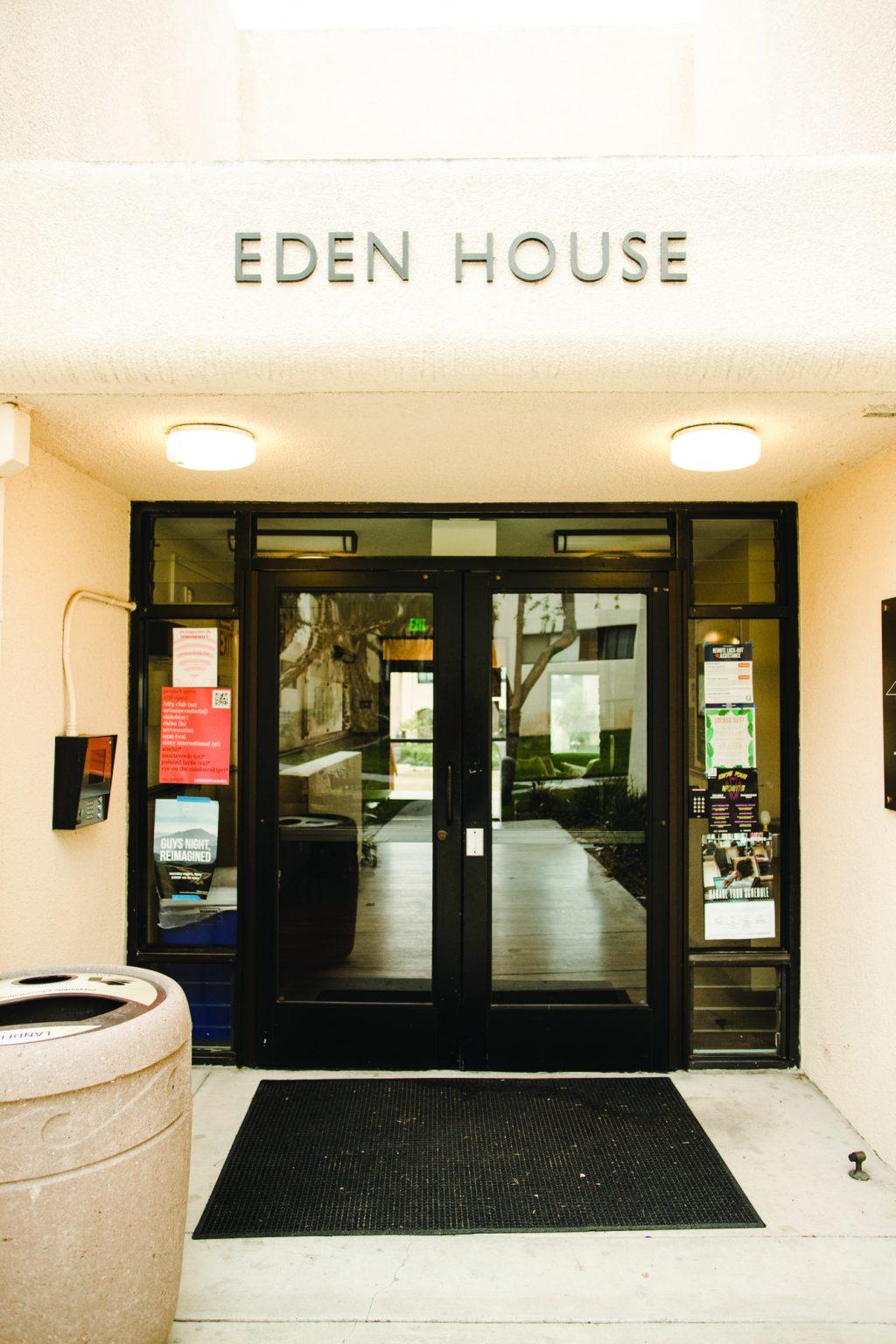 The entrance to Eden House.

Pupparo said for the foreseeable future, Eden will stay as it is.

“Due to some upcoming campus improvements, just generally, we are not able to sort of focus any more resources into that specific dorm right now,” Pupparo said.

Outside of the Eden House, Page said HRL partners with Facilities Services and the Center for Sustainability on various issues. One of the initiatives they have taken on is to divert waste during the student check-out process from landfills to more sustainable uses, such as donating or recycling them.

“The Salvation Army usually has been set up around campus, and they were able to weigh what they took last year was about 500 pounds that was diverted from landfills,” Page said.

Page said HRL welcomes initiatives and ideas that students want to have in their housing and residence life.

“Sustainability is important for all of us, and HRL cares about it,” Page said. “If there are things that [students would] like to see in their halls, we’d love to hear about it.” 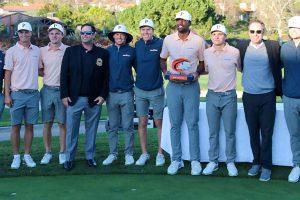 The Pepperdine Men's Golf team poses with their first-place trophy at the Southwestern Invitational. Photos courtesy of Roger...
Copyright 2013 Jupiter Premium Magazine Theme
Back to top