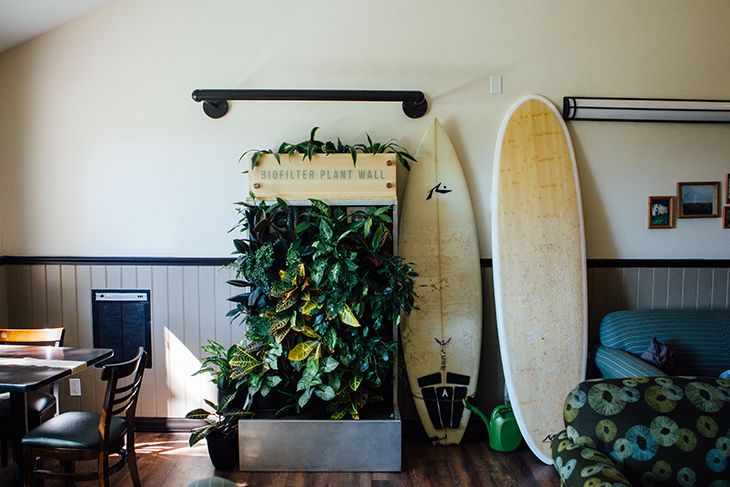 Sustainability is being promoted in tangible ways this year at Pepperdine. The Center for Sustainability recently announced the official opening of the new “Sustainable Living-Learning Community” known as the Eden Project.

The Eden Project, which officially opened Sept. 30, is located on campus in the residence formerly known as Sigma Hall. The residence was outfitted with a number of sustainable features, including a behavioral campaign aimed at impacting the behaviors of students on campus in regards to sustainability, according to the Center for Sustainability’s website. Some of the residence’s new features include recycled content laminate flooring, LED lighting, recycled carpeting and even an organic vegetable garden.

Senior Spiritual Life Advisor for the Eden Project and Eco-Representative Avery Davis expressed the enjoyment he feels about the opportunity to integrate faith and sustainability through the Eden Project.

Davis leads a house group and feels strongly about the opportunity to mix his Christian faith with his passion for sustainability by discussing the Christian moral calling to sustain the planet with students.

Emily Mead, the coordinator for the Center for Sustainability and the Office of Governmental and Regulatory Affairs, explained the impact of the behavioral campaign behind the Eden Project.“It’s not like we went in, retrofitted a building and then left it,” Mead said. “It’s an ongoing process where we’re testing the things we put in the building and we’re working with students to help change the behaviors, knowledge and awareness of all the residents living there.”

The project was initially conceptualized by the Center for Sustainability, who organized a stakeholder committee of students, faculty and staff to select a residence and then submit a proposal to the Waves of Innovation grant, according to a sign posted in Eden’s lobby. The project was awarded $150,000 for initial funding of sustainability components, Mead said.

President Andrew K. Benton commented in an email on the personal significance of the project to him.

“I am grateful to see Waves of Innovation giving life to the important teaching and modeling techniques now lived large in Eden House. We simply must be good stewards of the natural resources entrusted to us, and this project, still both adventure and experiment, means a lot to me,” he wrote.

Founding Director at the Center for Sustainability and Associate Vice President for Governmental and Regulatory Affairs Rhiannon Bailard has seen the Eden Project evolve from its first conception and expressed her joy in an email.

“Watching the Eden Project evolve from an idea raised at a brainstorming session led by EVP Gary Hanson, to a concept at the Waves of Innovation initiative, to a fully-designed project through the multidisciplinary committee, to now a student residence feels absolutely mind-bogglingly incredible,” she wrote. “I am still awestruck at the fact that there are students living there right now engaging with and learning about sustainability on a daily basis. The ribbon-cutting ceremony was the icing on the cake, and an incredible event for everyone that was involved.”

Junior Rhett Johnson, PAC service chair, helped to run the ribbon-cutting ceremony last Wednesday. He enjoyed the environmentally friendly elements of the dwelling and its impact on the community.

“The whole place has a really nice aura about it,” he said. “I think it’s really great that Pepperdine is being so eco-friendly by giving back to the community in this way.”

This year there is a balanced diversity of students, ranging from those passionate about sustainability to those who were unaware of the sustainable features until they moved in, Mead said. Both Mead and Davis said that most students were incredibly open to the idea of sustainability as a whole and generally thrilled to live in the sustainable dwelling.

Bailard commented on the students’ passion for the Eden Project and the personal impact this has had on her.

“The feedback we have received from students has made this entire project worth all of the time and effort,” Bailard wrote. “They are psyched to participate in the Eden Project, they are truly passionate about sustainability and they are excited to make the Eden Project their own. Seeing students composting, gardening, cooking in the community kitchen and leading environmentally-conscious Bible studies fills my heart with happiness.”

The biggest challenge for students living in the Eden Project is changing their long-term habits. Habits such as turning the lights off, sorting trash and taking shorter showers are small steps that can make a big impact, Davis said.

“I think the hardest part is switching these habits that we’ve built up,” he said.

Mead agreed with this emphasis on changing behavior. “It’s so so important to connect your personal behaviors to greater issues, because everything we do does have an impact on the environment,” she said. “Once you get someone interested in sustainability and passionate about it and there’s a true sense of altruism behind it then they’re permanently changed. And then that change will affect others.”

According to Bailard, the committee named the endeavor the Eden Project because it is an ongoing process helping to continue making people aware of the need to be sustainable.

“The Eden concept was put forth by Dr. Stephen Davis, a faculty member of our multidisciplinary stakeholder taskforce, due to its symbolism for creation and garden; it seemed to really capture the heart of what we were doing and the start of something new,” she wrote. “And we chose the Eden Project, instead of the Eden House, because what happens inside the building is far more important than the building itself; it is about what our students do and learn. And it is about what works and what doesn’t work for implementation into future residential projects.”

Sustainability is becoming increasingly important as resources are becoming more scarce and conservation is necessary.

“I think in a broad sense, issues of sustainability are going to be the biggest issues facing us over the next 50 years,” Davis said. “I mean, we’re going to reach a point where being sustainable isn’t a choice.”

Mead echoed this sentiment, stating how being sustainable is of the utmost importance.