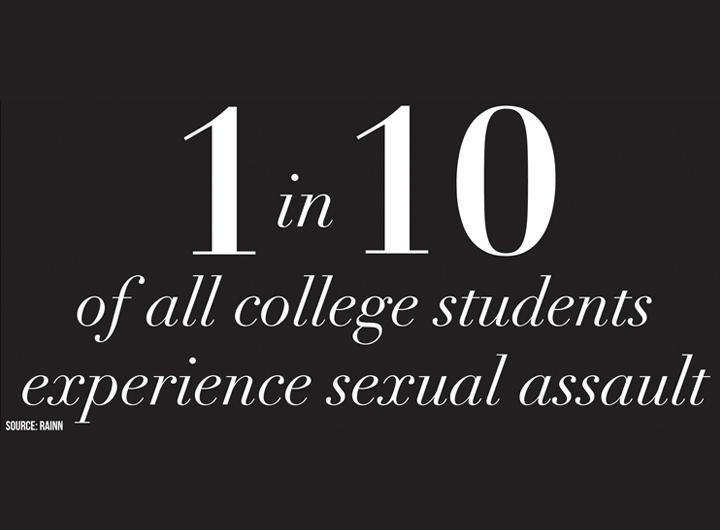 One in 10 of all college students experiences sexual assault, according to the Rape, Abuse & Incest National Network.

Despite the efforts of Title IX, the Counseling Center, the Student Wellness Advisory Board and other campus organizations, student leaders said the overall awareness about the prevalence of and resources for sexual assault on campus is alarmingly low.

“I definitely don’t think you can get through college without knowing someone or being a victim of sexual assault,” junior Ivy Leroux said. 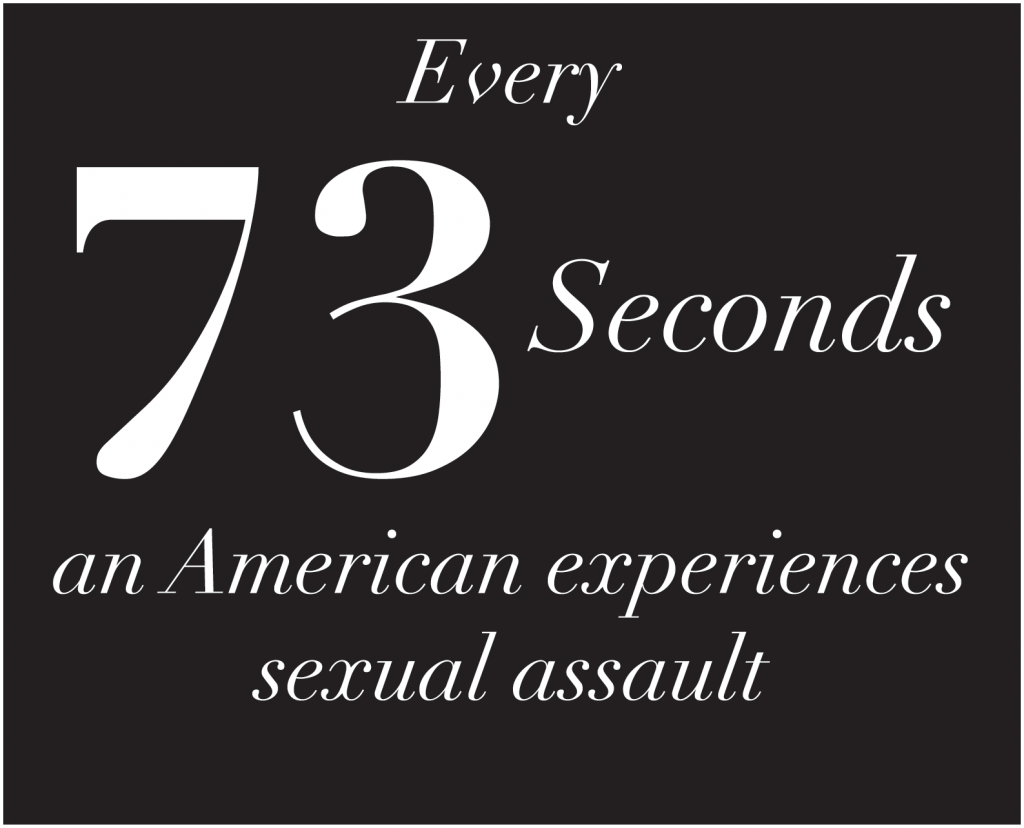 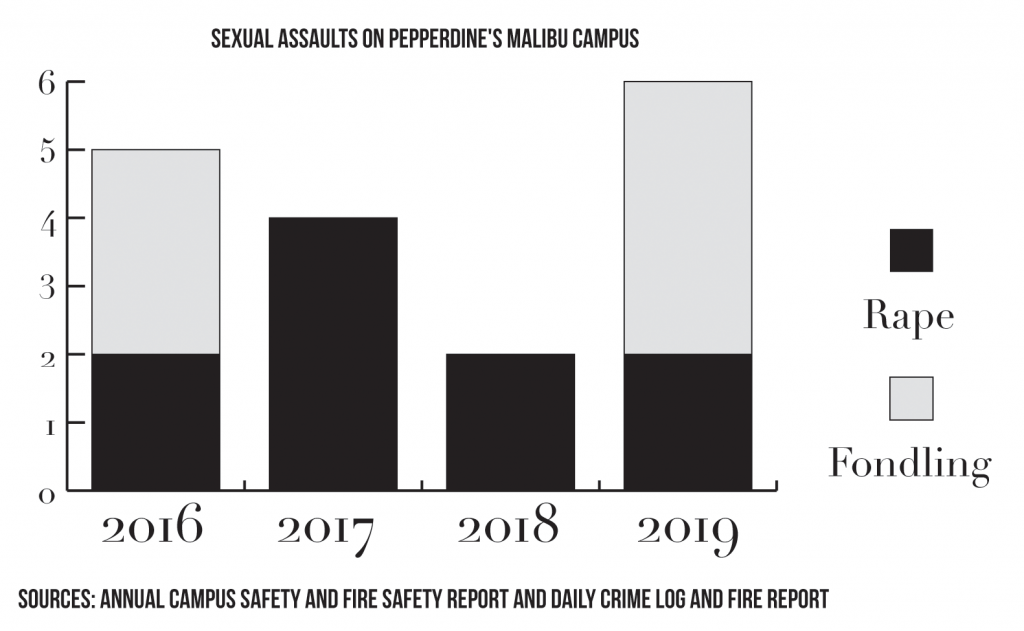 Seventy-five percent of Pepperdine students reported they do not feel adequately informed about sexual assault incidents, according to a fall 2019 Graphic survey of 45 responses.

Senior Aine Jones, who serves as the co-president of SWAB’s Healthy Communities branch, said she believes there is a misconception that sexual assault does not occur on Pepperdine’s campus. This can result in blaming or disbelieving survivors and decreases the likelihood of reporting.

Leroux, president and founder of the Feminist Club, echoed Jones’ statement and said the lack of clarity surrounding the definition of sexual assault increases its prevalence on campus, disempowering the survivors and empowering the perpetrator.

“A lot of it happens because people are able to claim ignorance,” Leroux said. “One of the most important steps we can take to combat this is to draw actual lines and make sure people are aware of what sexual assault can entail.”

Pepperdine’s Sexual Misconduct Policy defines sexual assault as “an offense classified as a forcible or non-forcible sex offense under the uniform crime reporting system of the Federal Bureau of Investigation.” This includes rape, sodomy, sexual assault with an object, fondling, incest and statutory rape.

The Clery Act — which mandates all federally funded institutions of higher education to provide a daily crime log and an annual report of specified crimes — defines sexual assault as “any offense that meets the definition of rape, fondling, incest or statutory rape as used in the FBI’s Uniform Crime Reporting program.”

It is only when the Pepperdine community acknowledges that sexual assault occurs on campus that steps can be taken to end gender-based discrimination, said Stacey Lee, the Health, Wellness and Resilience Education Program coordinator and SWAB supervisor.

“This does happen on our campus, and so many people are affected in our community — we’re not exempt from it,” Lee said. “Once we help people to let that realization sink in, then we can talk about how to be active bystanders.”

Certain behaviors like drinking alcohol can make women more vulnerable to those engaging in predatory action; however, Leroux said no one should attempt to justify the perpetrator’s actions.

Leroux said the tendency to blame survivors instead of perpetrators has lasting effects on physical and mental health.

“Society has put it in our head that it’s our responsibility to not be raped, which is ridiculous,” Leroux said. “There’s something to be said about us having to carry the burden of being sexually assaulted.”

Jones also noted the everyday effect patriarchal belief systems have on her gender.

“That can foster this fear in a way when you’re always taught you’re less than a man in every aspect,” Jones said.

Over 90% of female Pepperdine students said they have felt unsafe because of their gender, while over 90% of male Pepperdine students said they have never felt unsafe because of their gender, according to a spring 2020 Currents survey of 221 responses. To stay safe, female students reported taking precautions ranging from carrying pepper spray and preparing to use keys as a weapon to never going anywhere alone at night and avoiding eye contact with strangers.

“Instead of teaching us ‘don’t get raped,’ maybe we should change the conversation to ‘don’t rape,’” Lee said. “It should be framed inclusively: We should not commit acts of violence against anyone.”

Sexual assault disproportionally impacts women of color, immigrant women, LGBTQIA+ women and disabled women, according to the National Organization for Women. Twenty-one percent of TGQN — or transgender, genderqueer and nonconforming — college students have been sexually assaulted, compared to 18% of non-TGQN females and 4% of non-TGQN males, according to RAINN.

“If you experience gender-based violence, you also have this barrier of the Pepperdine culture, but then now you have the barrier of your own culture to try to reconcile or even justify what has happened to you,” Lee said.

La Shonda Coleman, Title IX coordinator for students, said students of all genders, national origins, religions, sexual orientations, races, ethnicities, ages and abilities are deserving of parity and impartiality when reporting an instance of sexual misconduct and should expect nothing less. She said the office of Title IX can only be helpful when its employees value the lived experiences and listen to the voices of those seeking assistance.

“It is imperative we respond with a culturally responsive reply, recognizing there may be real or perceived barriers that person is experiencing in their outreach,” Coleman said. 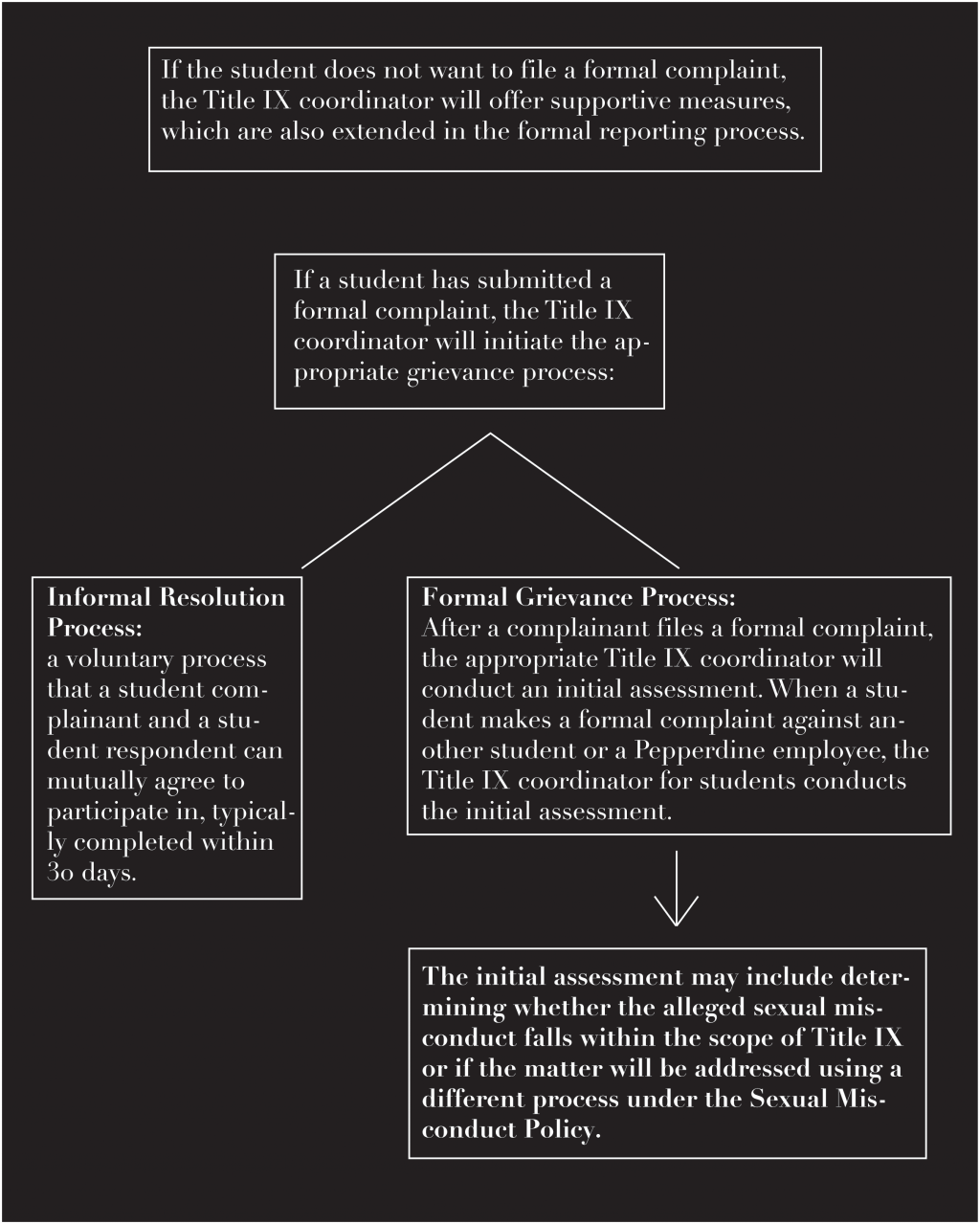 Following a sexual assault, survivors may experience feelings of shame or guilt, post-traumatic stress disorder, and anxiety and depression, said Sophia Fang, a staff therapist at the Counseling Center. In the days, weeks or even months after the incident, however, survivors are also left to figure out what to do.

Leroux said she thinks the majority of students, including herself, are unaware of how to report a sexual assault. According to the Graphic survey, 55% of students claimed they are unaware of the reporting process at Pepperdine.

“If it’s already hard to come forward about that happening to you and be vulnerable in that way, then I would think it would be helpful to know the process,” Leroux said.

Jones, a sexual assault survivor, said in her experience, the office of Title IX was a supportive and helpful resource, especially in teaching her how to cope. She said her experience reporting the assault to the Department of Public Safety, however, upset her.

“I did not feel comfortable anymore,” Jones said. “I felt like it was not a safe space for me to share my story and to report. I definitely felt they were victim blaming me. […] My experience with DPS was not good for fostering a community where survivors can feel comfortable coming forward.”

Only 20% of college-age women report incidents of sexual assault to law enforcement, and only 16% of college-age female survivors receive assistance from a victim services agency, according to RAINN.

Coleman said sexual assault is underreported on a national level and at Pepperdine. Students may be afraid of not being believed, getting their perpetrator in trouble or disrespecting their culture.

“My deepest hope is that not one person in the community would experience interpersonal harm or sexual assault, and that should it happen, I would never want anyone to believe that in any way it was their fault,” Coleman said.

Coleman said Title IX is dedicated to ensuring complainants as well as respondents understand their rights and options upon reporting. If students do not pursue a formal complaint, Coleman will provide them with supportive measures, and if they do pursue a formal complaint, she will provide them with the information necessary to initiate either an informal resolution process or a formal grievance process.

One frequent critique is the reporting and investigative processes often require survivors to relive their experiences. Coleman said Pepperdine prioritizes a trauma-informed approach, which she views as absolutely crucial.

“It goes beyond training,” Coleman said. “Embodying the spirit of that training is to do no harm — to ensure there is an awareness of the number of times someone is coming forward with a complaint.”

Sources agreed engaging in ongoing and inclusive conversations about sexual assault at universities — whether that involves everyday interactions among students or campus-wide educational efforts — is invaluable.

Leroux created the Feminist Club to provide a safe space for survivors of sexual assault to speak about their experiences. Destigmatizing the topic can help end slut shaming, victim blaming and other aspects of rape culture that shift the focus from survivors, whose behaviors are often questioned, to perpetrators, whose behaviors are often dismissed.

Jones said SWAB is taking advantage of the remote format this semester by aiming to educate proactively rather than retroactively when students return to campus.

The Healthy Communities branch of SWAB partners with Title IX to provide students with educational resources and events, including Denim Day and Take Back the Night. SWAB recently planned an Instagram red-out campaign to raise awareness about red zones, or the first 6 to 10 weeks of the school year when sexual assault is most frequent, Jones said.

Although many organizations and individuals strive to empower survivors to speak out about their experience, Fang said the focus should instead be on giving them a choice — the choice their perpetrators took away during the assault.

“We, of course, create a safe space for them to be able to share the experience and also respect their choice — either they choose to report or not,” Fang said.

Therapists at the Counseling Center are responsible for knowing the available resources for sexual assault survivors as well as being respectful of how they can help victims feel safe, Fang said. She advises friends and peers of survivors to do the same.

In the past, Title IX partnered with Housing and Residence Life to educate first-year students about sexual assault on campus. This semester, however, Coleman said the annual Title IX Talk — as well as the second Step Up! leadership cohort meetings — occurred over Zoom.

“Although COVID has altered the way we were able to engage with our incoming students, it didn’t stop us,” Coleman said. “We worked diligently to create an online platform to educate all incoming students about sexual misconduct.”

Coleman acknowledged there are no steps to guarantee protection from sexual assault but said she hopes community members will always recognize the dignity of every individual.

“My goal is ultimately that all of our students are safe and free from any experience of sexual misconduct and gender-based violence,” Coleman said. “The way we can move toward realizing that goal of helping our community be safer is through prevention education and training.”

Survivors of sexual assault can call the 24-hour National Sexual Assault Hotline at 1-800-656-4673 to connect with a trained staff member from a local sexual assault service.