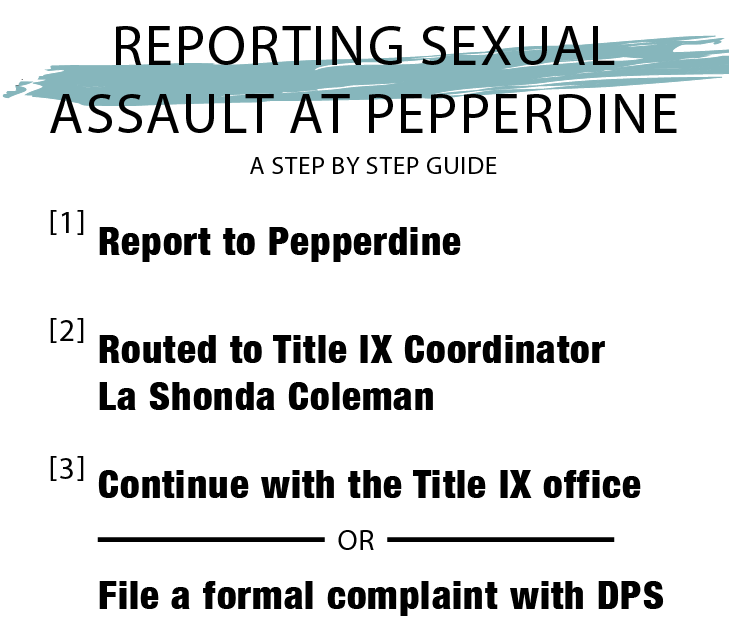 Editor’s Note: A name has been changed to protect a source’s identity.

“This is someone I knew already, and it was just weird. It was just a weird side of him I never saw.”

Former Pepperdine student Sarah Doe (name changed) began her evening at an off-campus house rented by members of a Greek fraternity with a small group of friends. The group drove to the house together, and everyone, including the driver, planned to sleep there that night.

Doe soon discovered, however, that there were “only a few places you could actually sleep, which involved the guys’ rooms.” She decided that she would rather go home. “So this person, that I’d ended up reporting [after the incident], first offered to pick me up and take me home, after just hanging out or something,” Doe said.

“So this guy doesn’t even try to hang out at all,” she said. “He just drives us straight to his apartment. I have no idea where it is. And I’m very confused because it’s like 3 or 4 in the morning. I have no idea who to call to pick me up now.”

Doe said she thought the driver who had taken her to the original house before was already asleep and staying there, so she felt she could not call him.

“And then all the lights are off, and I’m just like, what is happening?” she said. “Then, the guy just keeps insisting that he’ll drive me back in the morning and then at that point it was really weird.”

Doe said she did not know what to do, who to call, or where she was. She tried to sleep, but during the night the man tried repeatedly to pull her against him. “I could tell he was using his force,” Doe said. “I actually had to use my strength to push him off me.”

“At one point, I think he dry-humped me in his sleep, and it was just so gross — it was the weirdest thing,” she said. “And then eventually he did drive me back in the morning, and nothing actually happened because I just kept pushing him off me, but it was the weirdest experience. I felt so gross. And yeah, I actually never — I just never talked to him again after that.”

Doe experienced “multiple instances” of sexual misconduct during her time at Pepperdine but only reported the one that happened this night, which she said is “the weirdest one.”

Doe decided to report the sexual misconduct to Pepperdine only after a friend reached out to her and told her that at least two other women were filing reports against the same person. Doe said she “would have definitely not done anything” had the other women not come forward.

She said she tries not to dwell on these experiences, preferring to put them in the past and move on.

In one case, someone who “just wanted to hang out” wanted to take it further. Though Doe said “nothing happened” at the time, she was left with an uncomfortable feeling.

“It’s that weird feeling where the person didn’t actually care about anything you had to say or whatever the whole time,” she said.

Other cases were more physical. “There’s a couple other occasions where I — I had done something [sexual] with them before, and I just didn’t want to anymore,” Doe said. “And for some reason they just couldn’t understand that, and they felt like they should still be able to. And they would try to force me, or actually people have physically lifted me up and prevented me from leaving sometimes.”

A 2015 survey of 27 schools by the Association of American Universities reported that 23 percent of female college students said they experienced some form of non-consensual sexual contact while attending a university, but rates of reporting ranged from 5 percent to 28 percent.

“The most common reason for not reporting incidents of sexual assault and sexual misconduct was that it was not considered serious enough,” the study states. “Other reasons included because they were ‘embarrassed, ashamed or that it would be too emotionally difficult,’ and because they ‘did not think anything would be done about it.’”

Doe said she was unsure of what would happen as a result of her report, how public the report would be, and what details about her would be released.

“First of all I didn’t really know what reporting it would actually accomplish,” Doe said. “And things are complicated because most of these people aren’t, like, strangers [to me].”

She didn’t know how the report would affect the person she was reporting, other than the possibility of suspension.

“I wasn’t sure what I wanted to happen to this person who did that,” Doe said. “All I know is that I just don’t want them to do it anymore.”

DPS Director of Administrative Operations Dawn Emrich said incidents of sexual misconduct reported to Pepperdine are first routed to Title IX Coordinator La Shonda Coleman, who does an initial intake and informs the reporting party of their rights, options and resources available to them. The Title IX office can also address requests for immediate action, such as informing the respondent to discontinue contact with the reporting party. When Doe filed her report, she worked with former Associate Dean of Students Tabatha Jones Jolivet, who handled these cases before Coleman filled the Title IX coordinator for students role last semester.

“[Coleman is] going to do kind of a size-up with the person reporting the concern, letting them know all of the resources and procedures and also to find out what they want to have happen next,” Emrich said.

Reporting parties can continue to work only with the Title IX office or file a formal complaint, which is then directed to DPS. “We would then be reaching out to that individual and then subsequently any witnesses or potential respondents, and that could happen either through email or through phone,” Emrich said.

Reports to DPS are entered in on the date they are reported, but Emrich said a second set of dates are documented for when the incident occurred.

Doe filed her report after she left Pepperdine, more than a year after the incident. She sent an initial email to DPS and did at least two follow-up phone calls in addition to further email correspondence.

“At one point, one of their questions in an email was like, ‘was he erect when he touched you?’ or something,” Doe said. “I was like, that is such a weird thing to ask. I already reported it, and I talked to people on the phone like twice, and it was just taking so much of my time. I’m not sure if the report actually got finished, but I did report it.”

Doe said she felt “hopeless” during the reporting process because of the time and effort involved. After the third or fourth follow-up, she said she “just didn’t make it.”

“It was just taking so much effort to try to set something right, and that’s why I feel hopeless, I suppose,” she said.

Doe never heard anything official about the outcome of the reports. “The only way that I know what happened is through my friends that are still at Pepperdine,” she said. The official outcome of the case is unclear.

Doe said sexual misconduct was not “something that people talked about that much” when she attended Pepperdine, but she added that she does not believe that it is an institutional thing. “I feel like sometimes it’s also a social thing, too,” she said, explaining that she did not feel comfortable “telling certain friends about some of these incidences.”

She does acknowledge that Pepperdine has taken steps recently to open up the conversation about sexual misconduct and said that she is not criticizing Pepperdine’s reporting process or punishment policies.

“I don’t think the school suspending everyone or making the punishments more severe for people who are found to be guilty of whatever will necessarily change the culture and things like that,” Doe said. “I just think that it’s a very complicated issue and I’m not sure … how to fix things like that.”

Doe said she feels better now knowing that she is “physically away from those people” and will likely not have any future interactions with them.

“I don’t like dwelling on it, or anything,” she said. “I don’t like having to [think], ‘this really messed me up and, now I’m just going to think about it all the time.’ I just kind of like to try to forget about it and move on, and I think that’s just what I do.”

The Clery Act, passed in 1990, requires all institutions of higher education receiving federal funding to provide a daily crime log and an annual report of specified crimes reported within a campus’ Clery geography.

Emrich said the Malibu campus’s Clery geography includes the “main footprint” of campus in addition to a “perimeter of public property around the campus,” encompassing the front of Alumni Park, PCH and the other side of the street. “If you think about that kind of width of a band around the whole campus, that’s part of our public property,” Emrich said.

Properties that aren’t contiguous to campus but still considered Pepperdine property are referred to as non-campus properties and must also be included in Clery reports. The Calamigos Ranch facility is one of such properties.

Clery Act data shows that 91 percent of college campuses reported zero incidences of rape in 2014, according to an analysis done by the American Association of University Women.

This figure is complex, however, as Clery only requires campuses to include reports that fall within their geography, and the rate of reporting sex offenses is low.

Pepperdine’s Campus Safety and Fire Safety Report from 2015 lists two on-campus forcible sex offenses in Malibu and one on public property in Florence in 2014. The 2013 and 2015 data sets across all Pepperdine campuses list zero reported incidences of sex offenses, forcible and non-forcible.

This means that reports like Doe’s, which occur off campus, are recorded internally, but they are not included in the numbers released to the public.

“It would not show up in the crime log in this case because this is an off-campus incident,” Emrich said. “The crime log of course is documenting incidents that happened in our Clery geography, so this incident wouldn’t be in the crime log, but it is a report documented in our system.”