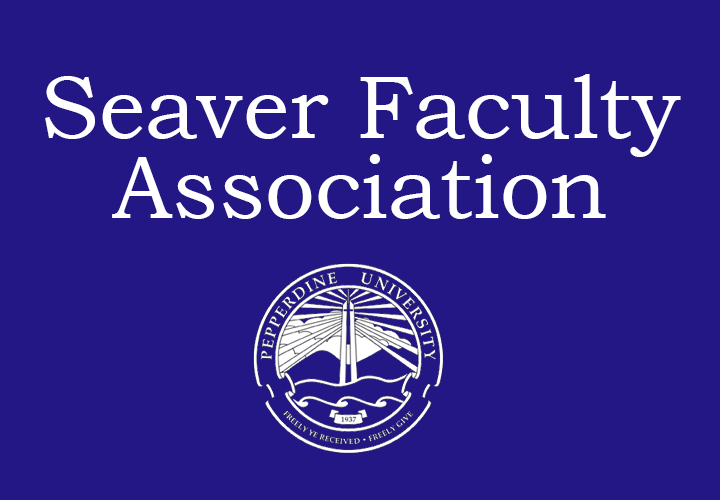 “We, the Seaver Faculty Association, express our commitment to stand with the Black community and to speak out in one voice against ongoing injustice,” faculty wrote in the statement. “We … affirm the truth that Black Lives Matter. In our community Black lives, and the lives of all people of color, do and must matter.”

SFA as a group wrote and developed the statement with key contributors Professors Connie James and Tomas Martinez. James is a professor of Management in the Business Administration Division, and Martinez is a professor of Psychology in the Social Sciences Division. Both are longstanding advocates for diversity and inclusion at Pepperdine and have been awarded for their work, research and teaching.

Martinez explained that the SFA, soon to be called the Senior Faculty Senate, has been a part of Pepperdine and Seaver College for many years, working as a collective of all Seaver full-time faculty members. The association serves as a representative on faculty matters, and while the association does not often make public statements, they felt the topic of racial injustice was important to address.

“It felt like a good time to make a statement recognizing not only the movement but also recognizing what it represents, especially within our own community — the Pepperdine community,” Martinez said.

The statement was a reaction to the Black Lives Matter movement and George Floyd’s murder and how both affect Pepperdine. It begins with an address to the Black community and an apology for the ways in which Seaver faculty have contributed to systemic racism, such as failing to support their Black colleagues and students.

“We confess that as a community we have failed to respond to the racial injustice experienced by our own students and faculty colleagues,” faculty wrote. “We pledge in humility to value others above ourselves (Philippians 2:3), and we accept the challenge to do better to promote a world which recognizes that all people are equal, are created in the image of God (Genesis 1:27), and are entitled to be treated with the respect the deserve as persons of infinite worth.”

It goes on to detail three actionable items the SFA commits to taking to build an antiracist community.

“It’s a letter to us, in a sense, affirming that we are open to taking responsibility for some of that history but also recognizing that it is our responsibility as Christians to ethically and morally take some action,” Martinez said.

The three actions are:

The creation of a cultural competence general education course has been in discussion since 2016, when Pepperdine faced its own rise of racism. The SFA and the General Education Committee approved the installation of a cultural competence component in 2017. Martinez, who was a member of the committee who approved the proposal, said that the goal is to create a component — whether that be a class, series of courses or something different — to teach diversity curriculum. While the discussion has been underway for three years, there is no definitive timeline as to when this component will be implemented.

“My concern is that it is taking a little bit too long to get to where we are,” Martinez said. “But I also think that by taking this action and recognizing the good work that the committee has been doing in this last year, we’re getting closer to some level of developing either a course or courses that are integrated into each of the divisions.”

Martinez said he hopes this academic year will be a year of dialogue — between students, faculty and administration — as community members continue to develop how Pepperdine approaches diversity and inclusion.

“We pledge to work together to build a community that exemplifies our commitment to inclusion and equity and our opposition to racism in all forms,” faculty wrote.