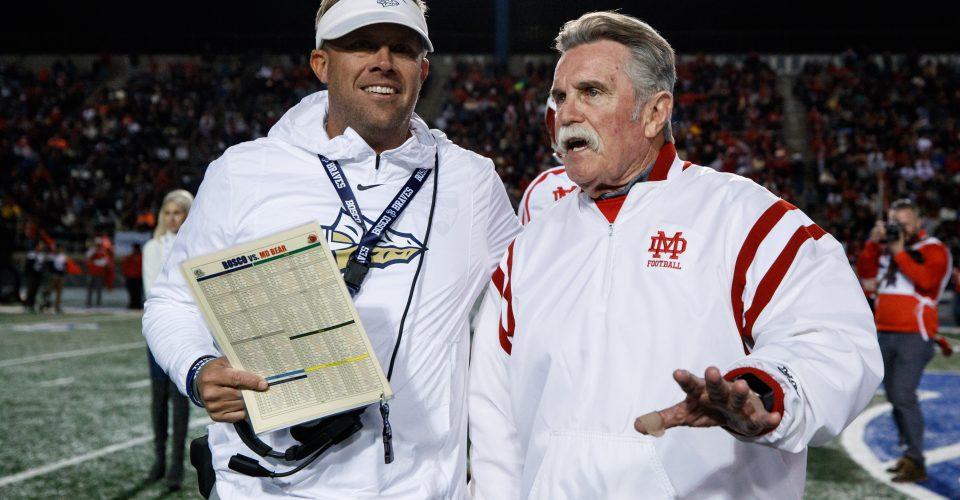 There were nearly 16,000 Southern California high school transfers in 2018. Among the massive total is an unidentifiable number of athletes who elected to change schools not because of academics but to better their chances of playing college sports.

In the SoCal high school football hotbed, the volume of transfers has created a disproportionate talent level among the top Catholic schools compared to the more regulated public schools. So while Mater Dei High School and St. John Bosco High School reload their talent every year, schools like Calabasas High School and Windward High School are left with promising yet inferior talent.

“Parents decided that a college scholarship would be possible if their kids had an opportunity,” KNBC Host Fred Roggin said. “And that’s really why this all started — kids looking to compete past the high school level. So high school became more than just your education.”

The California Interscholastic Federation (CIF) governs every high school sport in the state. In January 2018, CIF changed a rule that prohibits students from transferring solely for athletics. What was going on behind closed doors for decades was thrust into the light and is now being used more frequently every offseason.

Roggin is an LA-based media personality who has covered everything from the Dodgers to the Olympics across 40 years of television and radio. On his syndicated show that follows NBC Sunday Night Football, called “The Challenge,” he stays in touch with high school football through his segment “Roggin’s Heroes,” where he celebrates standout performances from all over Southern California with highlights and commentary from Friday night games.

Roggin said the rampant transfers date back to as early as 2006 with local powerhouse Oaks Christian.

“Schools have been doing it for years,” Roggin said. “Oaks Christian did it early. And we’re talking about private schools that can get away with that kind of thing. While the CIF had very strict rules about transfers, everybody tried to find a way around that.”

Finding a loophole is exactly what Oaks did in 2006, bringing in as many as 12 future Division I players and going undefeated with an average score of 53–9 on their way to a state title. Another point of contention was that Oaks did it in CIF’s Division III of football, not having to play any DII teams headlined by Orange Lutheran, Servite and Oceanside or the DI’s with Corona Centennial or the historically dominant De La Salle. 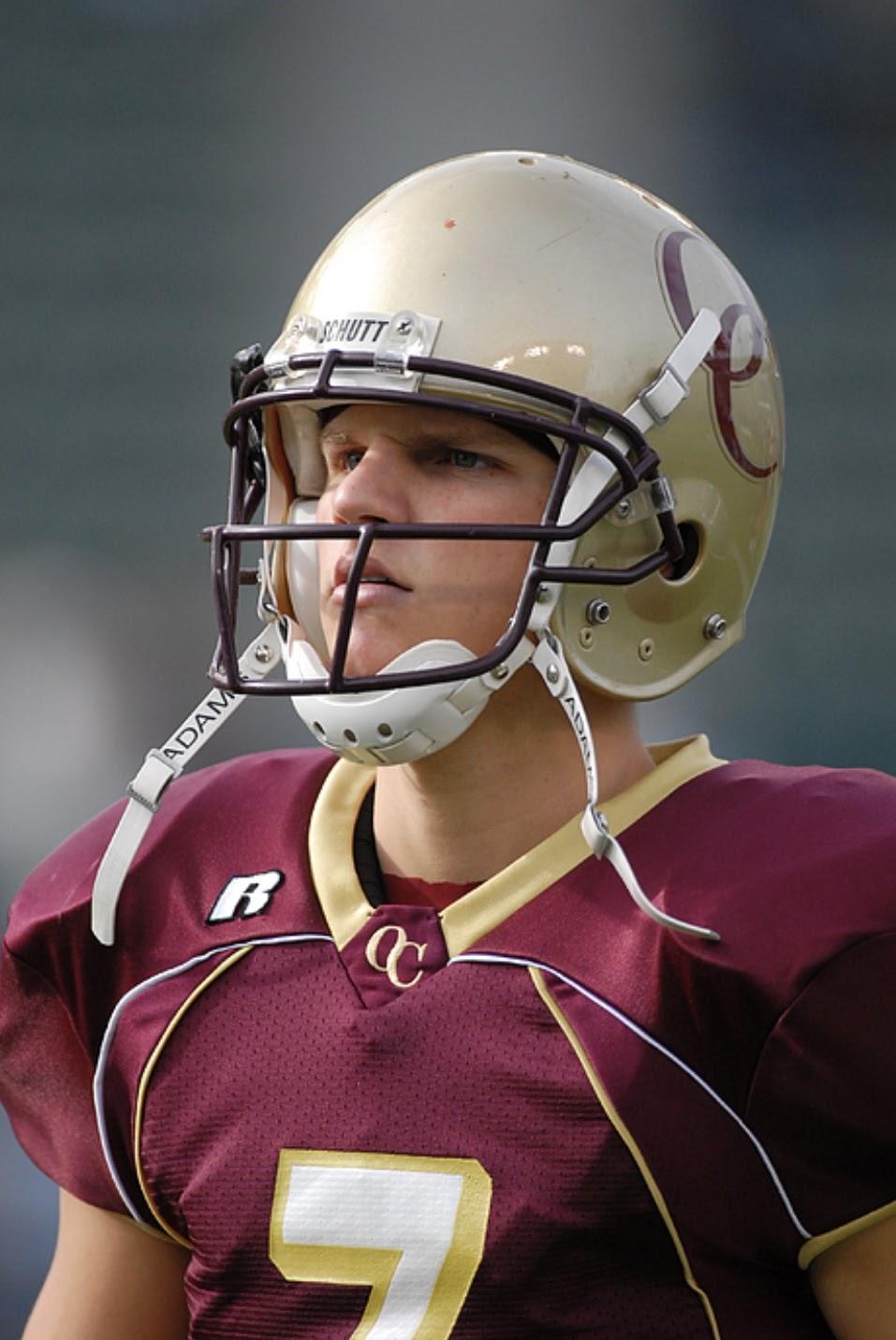 Oaks Christian’s most decorated player — Jimmy Clausen. He went 42–0 as a four-year starter for the Lions, was a U.S. Army All-American and played at Notre Dame. After five forgettable seasons in the NFL, Clausen is widely known as a draft “bust.” Photo courtesy of Icon Sports Wire

While Mater Dei (Santa Ana) is one of California’s most storied programs with Head Coach Bruce Rollinson about to start his 31st year, the team was in a bit of a championship drought in the 2000s. The team was always a contender and dishing out dozens of DI prospects, yet they didn’t win a state or national title from 1996 to 2017.

That opened the door for other local high schools to find ways to catch up. That’s what Bellflower’s St. John Bosco did in 2010 with finding Head Coach Jason Negro.

Negro, a Bosco grad who spent time as an assistant for his alma mater from 1998–2000, cut his teeth as a head coach at Trabuco Hills for seven seasons. Bosco Athletic Director Monty McDermott went after Negro and brought him back to take command of the struggling football team.

After going 5–5 in his first season, the team has lost 14 total games in eight seasons and won three CIF championships, most recently over Mater Dei. The past two seasons, the biggest star on Mater Dei’s roster was Bryce Young, who transferred after his sophomore season from Cathedral. Young finished as the No. 2 player in the country via 24/7 sports rankings and graduated a semester early to enroll at Alabama.

Eric Sondheimer is the lead prep sports columnist for the Los Angeles Times and has covered high school sports for over 40 years. Sondheimer said contrary to the belief that Mater Dei has been recruiting for decades, it was Negro at St. John Bosco who began the tradition between the two schools.

“It started when they hired Jason Negro,” Sondheimer said. “He’s the one who created this way of doing things and winning to attract players. It was Rollo [Rollinson], who hadn’t won a championship since before 2000, who didn’t want to recruit. But he saw Bosco’s success and decided, ‘Screw this.’ So he adopted the St. John Bosco way of doing things — to get in touch with youth football coaches and host camps before bringing in kids left and right.”

The recent CIF rule lets students play immediately when transferring schools if they are able to move their residence. This includes staying with a host family for the school year or football season before transferring back to their original schools second semester. Roggin said Mater Dei and Bosco have let that happen.

In high school football and basketball under CIF, the most elite teams year to year can qualify for a division-less playoff bracket to compete with other prestigious teams. Called the “Open Division,” it was a doorway to separate the best teams with the best transfers from everybody else. Sondheimer said the grand plan has not worked out the way that CIF expected.

“Schools like Harvard-Westlake and Corona Del Mar don’t rely on transfers,” Sondheimer said. “But this year, Harvard-Westlake made the Open Division and have to go against basically all-star teams when they’ve had players there for four years. The idea of Open Division was to put all the ambitious schools with transfers in one place. But now some of these schools without transfers are getting put there. It’s unfair the way things are going.”

While Negro and Rollinson ramped up the high school recruiting, coaches found ways to discreetly scout and recruit players decades prior.

Petros Papadakis is also an LA-based sports media personality. Born and raised in San Pedro, California, before he was a running back for the USC Trojans from 1996–2000, he lettered in football all four years at nearby Peninsula High School in Rolling Hills. Papadakis said he remembers hearing about the first high-level transfers when he was in middle school — unsurprisingly to an established Catholic school. 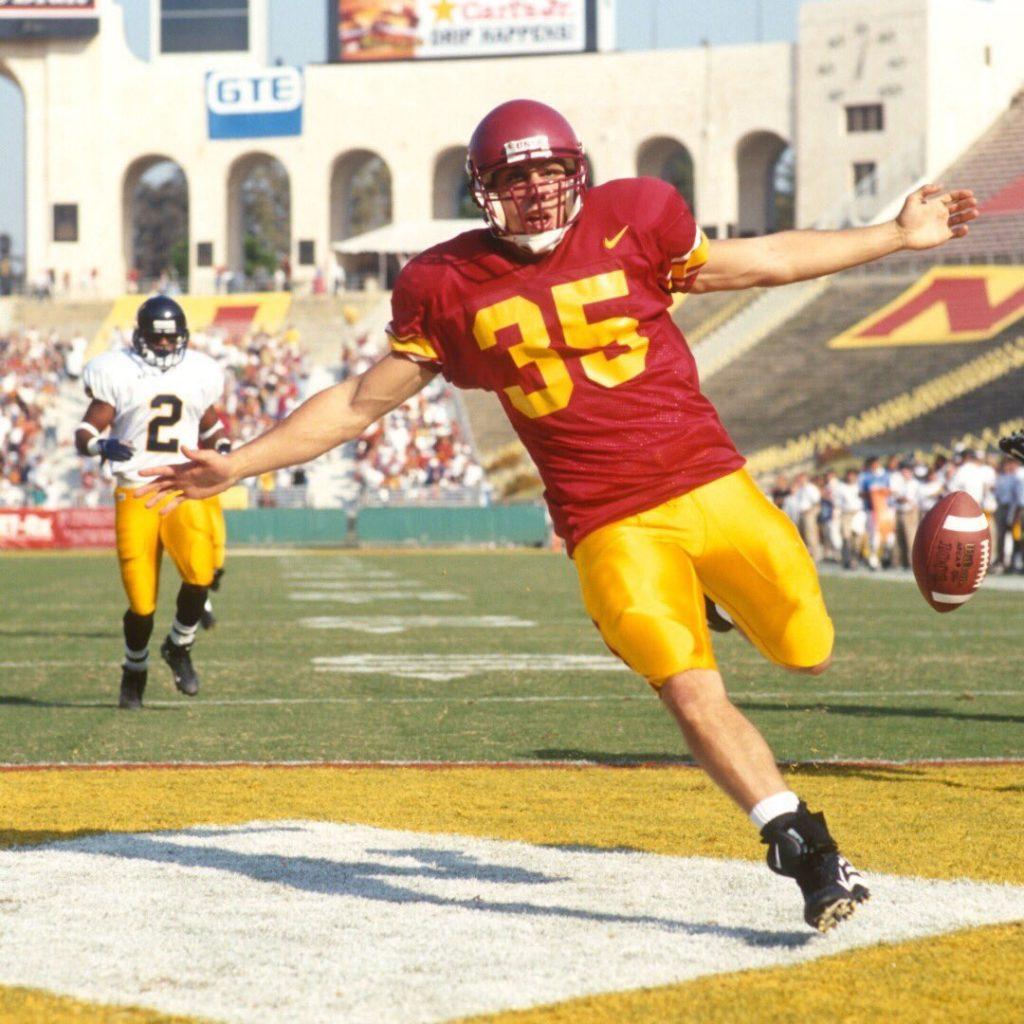 Papadakis celebrates a rushing touchdown versus Cal Berkeley in the L.A. Memorial Coliseum in 2000. Photo courtesy of @theoldp on Twitter

“When I was a player, Loyola was actively recruiting under [Steve] Grady all over and tried to get guys, and that was way before Jason Negro was old enough to have a team,” Papadakis said, laughing. “And they were able to because the team was damn good.”

Papadakis also said while recruiting happened privately in an era like the 1980s, the practice has been amplified over the past few years.

“We’re now in a hyperdrive with it,” Papadakis said. “Now Mater Dei and Bosco, among other schools in different time periods, have operated like football academies. Places where you can transfer in and out very easily.”

While transferring has gotten out of hand, Papadakis said it ultimately helps student-athletes to be noticed as the sport is dropping in both players and programs.

“I don’t know if this happens by itself, or if one school would be recruiting if the other wasn’t as well,” Papadakis said. “But since the number of football players is fewer, we need places for very serious football people to go and play. That’s what makes me feel a little better about the transfer stuff.”

Sondheimer said he sees a scenario of local fatigue among the dominant teams.

“The only way something will happen is if they get everybody upset enough to make some changes,” Sondheimer said. “Every year, there are people that want to separate private and public. I just don’t see that happening because there will be a lawsuit, and the private schools have better lawyers. So Mater Dei and Bosco will keep meeting every year, and I really hope that happens because that will force people to investigate what can be done.”

Sondheimer said although finding a solution for the transfer frenzy is an uphill battle, it’s not an impossible fix.

“I would go back to sitting out a year for the transfers,” Sondheimer said. “I think it was working fine. It was the [CIF] Southern Section that got scared of the state legislature intervening, so they dropped it down to one month. But I would even have the sit-out period go at the end of the season and the playoffs. That would immediately expose the coaches and parents who are trying to win championships versus trying to do a better job academically and athletically.”

Both Mater Dei and Bosco are replacing top-10 nationally ranked players at quarterback in 2020. While Bosco is still without a high-level quarterback on their roster, last month, Mater Dei landed rising junior Emmett Brown from Westview High School in San Marcos, over 80 miles away from Mater Dei’s campus in Santa Ana.

The Braves and the Monarchs will collide for regular season play in late October and are most likely on another collision course atop the Open Division in December playoffs. 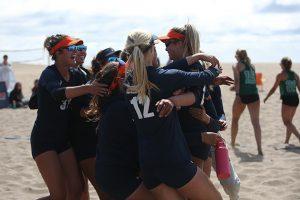