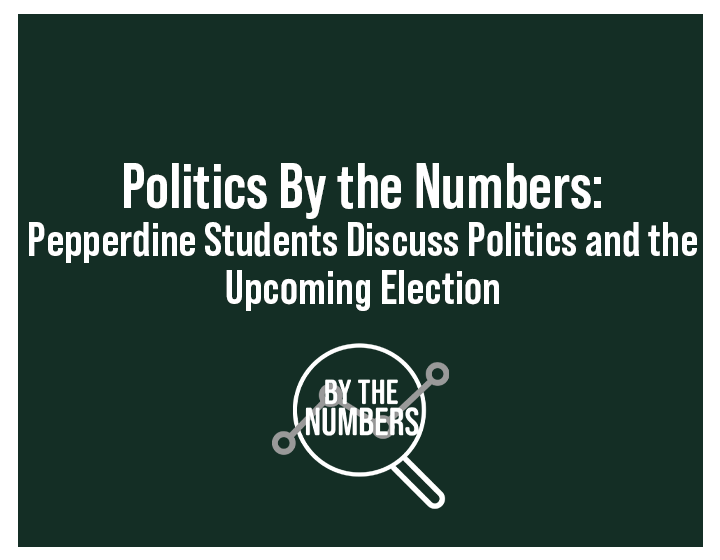 The U.S. presidential election tasked Pepperdine students with constructing their own political views and opinions prior to voting, but talking politics remains a challenge on campus.

Pepperdine accommodates diverse political thought, with 69% of undergraduate students identifying their political views to be either “somewhat conservative,” “moderate” or “somewhat liberal,” according to political preference statistics from the Office of Institutional Effectiveness. Students still find it difficult, however, to express their beliefs to the fullest, specifically when their views might be met with controversy, according to the OIE.

“Political dialogue is really important, especially on campus,” said junior Raymond Rider, president of the Young Americans for Liberty club. “People are sort of molding and forming their political views and beginning to put them into practice.”

Political dialogue, while crucial to the understanding of different ideas, sometimes is suppressed on campus due to polarization and a lack of willingness to respect and listen to views from opposing sides.

“We have multiple members who literally changed their major because they thought the faculty within their first desired major was too liberal,” said junior Spencer Lindquist, president of the Pepperdine College Republicans. “There is certainly a population who feels like they can’t speak their mind.”

Pepperdine College Republicans is one of two active political groups on campus, the other being the Young Americans for Liberty club. The Pepperdine College Democrats club became inactive after the 2016–2017 academic year.

Junior Nicolas Armenta said he plans to reinstate the Pepperdine College Democrats because he agrees there is not an adequate opportunity for those students to express their political beliefs on campus. Armenta fears that students with strong political views differing from the University might be outcast.

“I felt like there wasn’t a place for [Democrats] on campus,” Armenta said. “I felt like we didn’t have representation.”

Despite serving as a community for students with similar mindsets to connect, political clubs on campus have contributed to tension among students in the past. One of the most recent instances was the Pepperdine College Republicans’ decision to bring Ben Shapiro, a conservative political commentator, onto campus in 2018.

“We thought [Shapiro] could harm Pepperdine’s reputation because it looked like an endorsement of Shapiro’s views,” said alumnus Anthony Nabor (2019), founder of the Pepperdine College Democrats. “We also thought this could negatively impact students who would feel ostracized by such outward support of Shapiro’s ideas by their peers.”

Rider said he feels as if the tension among students has heightened due to the contentious nature of the presidential election.

“It definitely does seem, especially with the upcoming election, that battle lines are drawn,” Rider said. “People are on one side or the other, and they’ve already decided, and there’s nothing that can change their mind.”

Lindquist said he agrees the tensions of the election continue to produce a more fervent divide between political groups and less of a willingness to understand perspectives from dissenting sides. He noticed this trend on campus last year.

“People seem more politically inclined and politically active,” Lindquist said. “It wasn’t in the spirit of openness or a spirit of sitting down together and speaking about issues — it was much more partisan.”

Political division among students derives not from an unwillingness to have civil conversations but rather from fiery debates and a polarized political society, Nabor said.

“It’s all about ‘my side winning’ rather than changing hearts and minds,” Nabor said. “I don’t necessarily think this is unique to Pepperdine; it’s more of a consequence of our national political discourse, which is more concerned with winning the argument than working toward a real solution.”

Although the general outcome of national political discourse tends to be aggressive during election seasons, Lindquist said he believes his peers at Pepperdine still maintain the qualities and education to hold civil and productive discussions.

“It’s still possible at Pepperdine,” Lindquist said. “Our role is not only in facilitating that conversation but making sure everybody has a seat at the table.”

Rider said he agrees students seem to generally be open to discussion, maintaining a willingness to talk about political issues.

“There definitely is some closed-mindedness, but it’s few and far between,” Rider said. “Most people at Pepperdine are open-minded. I think they are interested in hearing views that differ from them.”

Armenta said he hopes once the Pepperdine College Democrats club becomes reinstated, he and other members can engage in productive dialogue with members of the two other political clubs on campus.

“It’s important to remind everybody that everyone wants the best for our country; it’s just about how we go about doing it,” Armenta said. “I think that is really powerful, and we need to build that back into the college campus.”