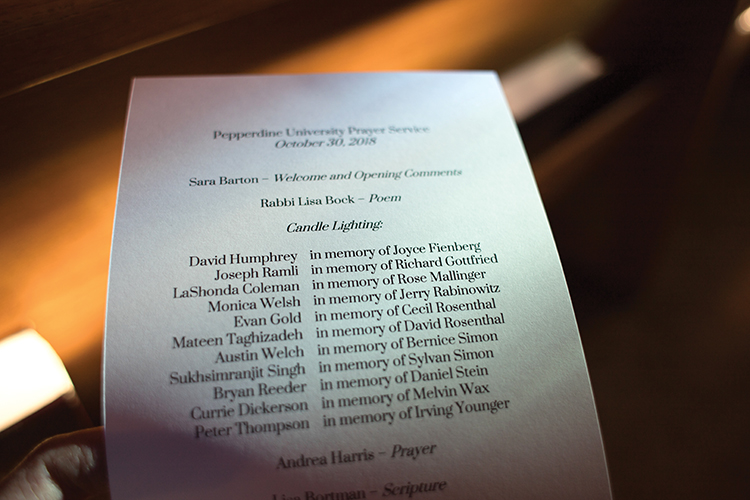 In response to the tragic Pittsburgh synagogue shooting, the Pepperdine community, especially the Jewish community, is calling for civil discourse, demonstrations of love and continued support to promote peace on campus.

“Cultures need to come together because this is not something anybody wants to have happen in their community,” Monica Welsh, program coordinator for the Glazer Institute for Jewish Studies, said. “It’s a perfect time to reflect on how these kinds of things can happen and how we can prevent that.”

Robert Bowers, 46, attacked the Tree of Life synagogue in the Squirrel Hill neighborhood of Pittsburgh, Pennsylvania, on Saturday, Oct. 27. During his 20 minutes inside the synagogue, Bowers killed 11 people and injured six, including four police officers. Bowers was indicted on 44 counts, including multiple hate crimes carrying the maximum sentence of the death penalty. As of Friday, all 11 victims were buried per Jewish traditions and memorial services continue around the country.

In the days following the shooting, Pepperdine administrators and staff took quick action to address what happened and show support to the community. Upon hearing of the shooting, Chaplain Sara Barton said she immediately started thinking and praying about how she and her staff should respond.

In partnership with the Glazer Institute for Jewish Studies, the Office of the Chaplain hosted a prayer service memorializing the shooting victims Tuesday, Oct. 30.

“We need to understand that people of faith can come together and support each other,” Barton said.

The following day, Vice President for Student Affairs Connie Horton sent out a university-wide email expressing gratitude for the prayer service, requesting that members of the community take action against acts of hatred and encouraging those who may be feeling distressed to seek out help.

“Any violent expression of hate toward people because of their religious beliefs, racial/ethnic group, political views, or any social identity or group membership is absolutely reprehensible,” Horton wrote.

Senior Logan Hall, host of Pepperdine Graphic Media’s “The Rundown,” said he believes in being a part of a religious university, the Pepperdine community as a whole recognizes the gravity of the shooting.

“It looked like our community really came together to say, ‘This is something that we are not OK with and we want to show our support for that community,’” Hall said. “We definitely were able to recognize that when people are persecuted for their religion, it’s awful.”

For many on campus, the shooting caused reactions of sadness and dismay. Freshman Karina Weingard, who is Jewish, said she felt disappointed in society.

“You’d think that after the Holocaust, we would’ve worked past the anti-Semitism and the hatred, but it’s events like these that make you reevaluate and think ‘Are we really taking a step forward or two steps backwards?’” Weingard said. “We’re all human beings and we all want the same goal: health, family and love. What you believe in shouldn’t come in the way of that.”

Hall, who is also Jewish, said he was devastated and never expected to see anti-Semitism elevate to the level of a mass shooting in the US.

Associate Provost for Assessment and Institutional Effectiveness Lisa Bortman said as a young adult, she didn’t expect violence either but has come to be very conscious about danger as time has gone on.

“I sent my own children to a religious preschool and I don’t know if I would do that now,” Bortman said. “It’s so disheartening to think that you don’t feel safe [at a place of worship].”

The Jewish community on campus is small, with only about 25 students and several staff members actively identifying with the faith, Bortman said. While Bortman and Harris are both openly Jewish, they said there are both Jewish students and staff on campus who keep their faith to themselves. The reasons for not outwardly claiming their faith vary from person to person, but many of those who are open about being Jewish are welcomed at Pepperdine, Bortman said.

“I have never felt the need to hide who I am,” Harris said. “I am respected by people from all different backgrounds because of my faith or in spite of my faith, whatever the case is. But knowing that my faith is an important part of who I am, I feel wholly embraced.”

Harris said when she first started working at Pepperdine, her boss at the time, Provost Rick Marrs, even gifted her with Hanukkah decorations so that she could celebrate her own faith while the majority of the office decorated for Christmas.

“I think we’re very fortunate,” Bortman said. “I think that in being a Christian institution, faith is a part of our education, so we’re considerate about everybody’s faith more so than if you were at a secular institution that didn’t think about faith at all. I appreciate Pepperdine going the extra step and really thinking about students of all faiths.”

Bortman said non-Jewish students are also accepting and respectful, especially in the wake of the shooting, and that Jewish students reported that they’ve received nothing but support from their peers.

Hall said he never felt that there was a sense of Jewish community on campus or that he furthered his faith while being a student at Pepperdine but agreed that, for the most part, the university is a safe and supportive place for Jewish students.

“I’ve never been worried about being Jewish or talking about my beliefs,” Hall said. “Pepperdine is a Christian university and I think that something so special is that Christian values and morals really do embrace all cultures and do preach a loving and accepting environment.”

In the days leading up to the shooting, though, Hall had an interaction with another Pepperdine student who engaged in hate speech.

“The student started praising the actions of Hitler, talking about how what he did was so great and that he’s a legend,” Hall said. “I called him out on it.”

Other students who heard the hate speech were shocked and did not support the offending student, Hall said. Hall reported the incident to multiple people and said that the Department of Public Safety “does a great job” monitoring hate speech on campus.

“I’ve never really experienced anti-Semitism,” Hall said. “I know that it exists. I know that it’s out there and that people have these views. Until recently, I’ve never seen it in a very public sphere like we are now. But I was shocked to see it happen on our campus, which is so loving and accepting for the most part. It really just took me by surprise.”

Hall said hate speech is a national problem and that when divisive rhetoric is highlighted in the public sphere more frequently, people are more emboldened to partake in verbal abuse.

“It’s not OK to say those things and the best thing we can do is talk about it,” Hall said. “We need to take it to another level of really having these conversations about how hurtful hateful rhetoric can be and about the impact that it has not on just Jewish students but on everybody.”

Harris echoed these sentiments, emphasizing that words have power.

Some students, though, are concerned that people on Pepperdine’s campus are not acknowledging and discussing acts of hatred, especially the shooting.

Junior Marlee Hewitt felt she understood the repercussions of the shooting primarily because of her close relations to members of the Jewish community, noting that she does not personally follow any one religion.

“[The shooting was] kind of a shock, but honestly at the same time it’s sad that I feel kind of numb to that sort of thing now because it happens so often,” Hewitt said. “I think it hit closer to home because I do have such good family friends that are Jewish.”

Hewitt said she hasn’t heard many people on campus talking about the shooting and doesn’t think it has impacted Pepperdine as heavily as other places in the nation. Hewitt said she thinks the shooting has a smaller impact on Christians at Pepperdine than the Jewish community because it wasn’t a direct attack on a Christian group.

“People need to know ‘Hey, this actually isn’t okay and this shouldn’t be happening’ because I don’t think that’s necessarily been addressed,” Hewitt said. “I think that in general, the community needs to be more aware of these types of things.”

Hall said he hopes people of all faiths can recognize the importance of such acts of hatred.

“I think that when something like this happens, it’s important to realize that it’s not just an attack on Jewish people,” Hall said. “It’s an attack on all religious people, all people of faith.”

Senior SGA President Austin Welch wrote in an email that he was saddened by the shooting and believes it is up to all religions to come together to condemn violence and hate.

People must combat hatred with acts of love, especially towards those that they may not care for, and by standing up when they see injustice, Harris said.

“One of the biggest precepts in Jewish culture is the notion of Tikkun Olam,” Harris said. “It’s literally ‘to repair the world.’ We have a mandate to leave the world better than we found it and engage in acts of kindness and charity … Everybody could be like that. It doesn’t have to be a massive action. It could be taking someone to lunch because they look lonely, and then you’ve done something good and it has value.”

Despite the recent acts of hatred, Bortman said she remains an optimist.

“I just think that 99 percent of the people are wonderful and have good intentions,” Bortman said. “I can’t live in fear over the small percentage.”

Bortman also encouraged all students, faculty and staff to speak to the Counseling Center if they are in need of support, while Barton said that the Office of the Chaplain is also available for anyone who may be experiencing spiritual struggles at this time.