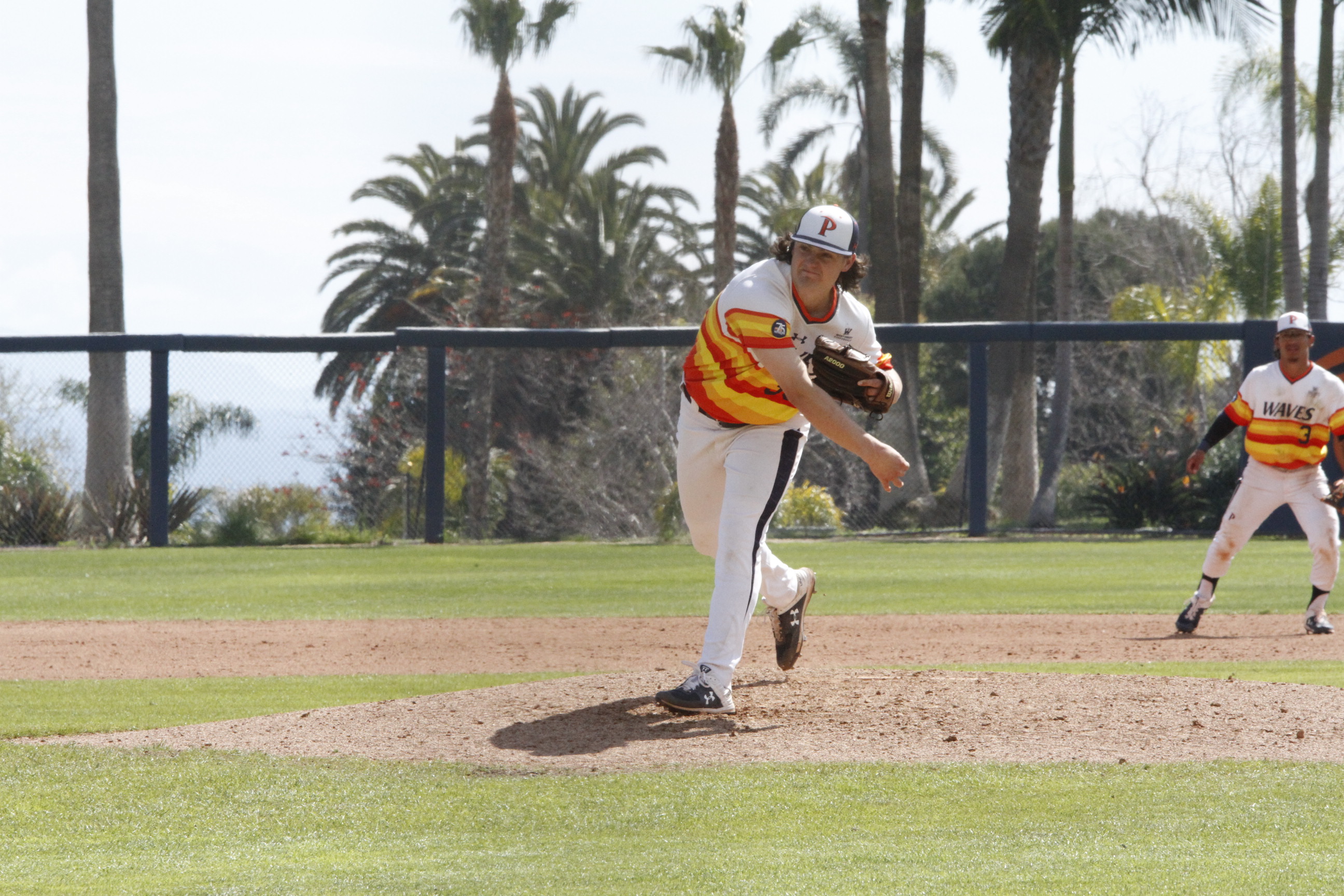 The Waves started the series with a 3-6 record but brought it to a .500 winning percentage with a sweep of the UC Davis Aggies. Through three games, the Waves held the Aggies scoreless in 25 out of 27 innings.

The first game was on Friday and sophomore right-handed pitcher Cooper Chandler got his first start and first win of the season. The former Freshman All-American pitched all nine innings and only allowed five hits.

Pepperdine’s lone run of the game came in the fourth inning when senior Cory Wills singled through the left side and fellow senior Matt Kanfer scored.

The second game of the series on Saturday was a batting barrage for the Pepperdine Waves while the UC Davis offense continued to struggle.

Redshirt junior left-hander Easton Lucas got his third start of the season and his first win in game two.

In the bottom of the first inning, Wills, Pepperdine’s fourth batter hit a grounder a few feet in front of junior Logan Denholm, the UC Davis catcher.

As he turned to throw out Wills at first base, he sailed the ball over his teammate’s head and Kanfer scored the first run of the game.

Lucas continued to churn out the outs from the mound in the second inning. After a base hit from UC Davis Lucas picked the player off with a throw to sophomore first baseman Billy Cook during the next at-bat.

The third inning was more of the same for Lucas, one hit before a quick three outs. The bottom of the third is when the Pepperdine offense blew the doors off of the game.

Junior third baseman Aharon Modlin had his first of two hits on the day with a shot to left center and got on first base. Freshman second baseman Wyatt Young followed after Modlin with a base hit of his own. Junior shortstop Quincy McAfee was next, he singled to left field and Modlin scored, bringing the score to 2-0.

Kanfer got on base once more and Wills followed with a triple to shallow right field. Young and Kanfer and scored bringing it to 4-0. Charlie Welch had the last RBI of the inning with a groundout to UC Davis sophomore shortstop Tanner Murray as Wills scored.

The score was 5-0 going into the fourth inning.

After Lucas struck out the last batter, the Waves continued their offensive efficiency in the bottom of the fourth.

Cook and sophomore right fielder Mike Malinchak both got on base. Modlin had his second base hit as he sent the ball went down the right side and Malinchak scored. Young followed with another hit, this time to deep center and Modlin scored. At the end of the fourth, the Waves were up 7-0.

Lucas’ final scoreless inning was the fifth as he again retired the first three batters he faced.

In the bottom of the fifth, Welch scored on a wild pitch. McAfee was hit by a pitch with bases loaded which brought Malinchak in for another run. Kanfer had another base hit and Modlin scored. The inning brought the score to 10-0.

Fifth-year senior Christian Stoutland subbed in for Lucas in the seventh inning. Lucas finished with only six hits given up versus a total of 21 batters and three strikeouts.

Hirtensteiner was pleased with Lucas’ performance.

“Lucas played good,” Hirtensteiner said. “You know once you get up by a lot of runs sometimes it’s hard to evaluate. It’s different when it’s a tight game. But he had good attack, mixed his pitches and his slider was pretty good today. He ate up a lot of innings for us.”

Pepperdine went to their third pitcher of the game in the eighth inning with redshirt junior right-hander Benjamin Slattery. Davis scored their third run and final run off of Slattery in that inning.

The Waves did not slow down offensively as the game neared its end. Kanfer came up for his sixth at-bat of the game and crushed a pitch to left field. Malinchak and McAfee scored.

Kanfer said he knew it the second the ball left his bat.

“Oh, it felt fantastic,” Kanfer said. “There’s really nothing better than that feeling.”

Junior right-handed pitcher Jack Baird closed the game for the Waves. He walked two batters and the game wrapped up after a flyout, strikeout and another flyout.

Pepperdine finished with 16 hits in 40 at-bats, 13 RBIs and only had one error defensively.

The final game of the series was another shutout victory for the Waves. Senior right-hander Jonathan Pendergast got his third start and second victory of the season. He gave up four hits in eight innings before being relieved by redshirt freshman Raul Salazar who closed the game.

Pepperdine’s first run didn’t come until the fifth inning. McAfee maintained his consistency at the plate with a double down the right field line, scoring Young who was on second.

The Waves distanced their lead in the sixth with another big hit from Malinchak that scored McKinnon and Cook.

Cook followed in the seventh inning with the last RBI of the game. He fired a bouncer to left field and scored McAfee for the last run of the game, bringing the score to 4-0.

This marked the first sweep of the year for the Waves. Kanfer feels that there is something different about this team compared to previous ones.

“I think we’re really a cohesive bunch,” Kanfer said. “Everyone picks up for their teammates’ weaknesses. I think we’ve really come together as a team more than previous years.”