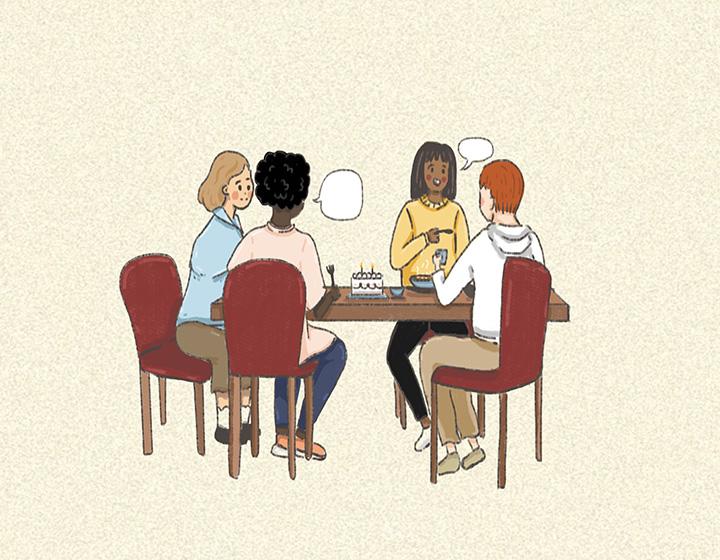 In a time when many are limiting the amount of interaction they have with other people, support groups — even in a virtual setting — can be an important part of the healing journey.

It is important to note the difference between support groups and group therapy. Group therapy is a form of mental health treatment where a mental health professional brings together individuals afflicted with the same condition. Support groups, however, unite individuals who are currently facing — or have faced in the past — similar life struggles, such as sexual assault or grieving the loss of a loved one, according to the Mayo Clinic. A licensed professional, or a lay person with adequate experience, can lead a support group.

“Their biggest help is bringing together people who have something in common,” said Shelle Welte, the associate director of the Pepperdine Counseling Center. “There’s kind of an instant connection there where they can share their stories, their personal experiences, and feel like, ‘Someone is going to get me.’ And they might even get some advice, some feedback from other people in the group that’s really helpful for them.”

Mackenzie Mazen is an MBA student at Pepperdine. Mazen has experienced more than her fair share of traumatic experiences in her life: being sexually assaulted as a child, losing her father to suicide when she was just 10 years old and being diagnosed with several chronic illnesses, including Ehlers-Danlos syndrome.

“I’m obviously a lot more comfortable with my grief because it’s been 11 years,” Mazen said. “But there are people who are just now going through this. And if I can create space where people can talk about that and not feel weird about it, then that’s something that I wanted to do.”

A huge aspect of the support groups Mazen is involved in is prioritizing the comfort of students. Mazen said she wants the groups to feel as normal and conversational as possible, trying to stay away from the image of folding chairs arranged in a circle that may come to mind when some think of support groups.

Mazen said she was inspired by a group she attended while studying abroad in London, in which adults gathered, ate dinner together and discussed their grief in a comfortable setting. Mazen said she noticed how comfortable the participants —who had experienced a range of losses — were in that setting, and wanted to emulate that in Malibu.

“I kind of took the concept of like the dinner party, where we would just have dinner together and then talk about, you know, whatever you wanted to talk about related to your grief,” Mazen said.

The benefits of opening up

La Shonda Coleman, director of the Student Care Team and Title IX coordinator, said the very act of sharing one’s feelings with another person can help alleviate the trauma they may be experiencing. Coleman said someone who may not know exactly how to express what they are feeling can have their experiences affirmed in the support group setting.

“With trauma, sometimes there [are] not words that can actually express what they’re holding in their body,” Coleman said. “For those who have found a way to communicate, whether it’s through sensory words or explicitly stating what they feel or what they felt, it can help to provide a model for someone else who’s looking to do the same thing. It can help to normalize an experience.”

Welte said the connection, support and healing that can be received from support groups are especially important during the COVID-19 pandemic.

“Right now, we really need connection,” Welte said. “At this particular moment in the world, it’s a really helpful thing for students to have a place where they feel understood by other people.”

While she thinks in-person support groups are best, Welte said there are unforeseen benefits to online groups. Those attending the group can do so in the familiarity of wherever they’re living, and also transition quickly between their classes and whichever group they may be attending.

“It kind of levels the playing field for people,” Welte said.

Senior Morgan Clinton, a representative for SWAB, said support groups can be a great option for someone who is new to counseling or is nervous to share their trauma with loved ones.

“They are very helpful, especially for students who feel intimidated by doing one-on-one therapy with a therapist at the Counseling Center,” Clinton said. “The problem is just getting people initially to make that plunge and to commit to it, especially now that we’re virtual, because things are so much more awkward on Zoom.”

Coleman said there are many reasons a person could be hesitant to join a support group, or even seek counseling at all. A person’s trust or vulnerability could have been exploited in the past, and for people of color, mental health resources are not only stigmatized but also harder to get.

“Not every racial identity has been supported in asking for help,” Coleman said. “It has meant different things for different people. For some within our country, to ask for help was seen as being lazy or asking for handouts, whereas for others, not so much.”

Coleman said one of the best ways to normalize support groups is to actively work to honor those who have taken the step to be vulnerable to others.

“We can destigmatize asking for help by celebrating help-seeking behaviors,” Coleman said. “It’s a demonstration of inner strength and self-awareness. We are not created to do life alone; we are created to work interdependently.”

Clinton said the stigma of support groups will be mitigated when individuals can be open and honest with each other, not shying away from questions or topics that may seem taboo.

“Far too often, especially at Pepperdine, we have an issue making people uncomfortable because we’re so much about the status quo and the ‘Pepper-fine’ thing,” Clinton said. “Something that SWAB does a really good job of is, in a delicate way, asking those hard questions and coming down to: ‘Why do we even have this normalization problem in the first place?’”

Senior Aine Jones, a student representative for SWAB, said it is important to remember that healing is not linear, and support groups may just be one step in the holistic healing journey.

“If one aspect of your health is suffering, the others are too,” Jones said. “So when it comes to mental health, making sure you’re also still taking care of your body and you’re surrounded by friends and people you love; that is so important to your overall health and wellness too.”

Mazen said a piece of advice she has for people considering joining a support group is to not overthink the experience.

“Healing doesn’t have to start there, healing can start anywhere,” Mazen said. “It can start just listening to other people sharing things about their lives and being like, ‘Oh, like I resonate with that.’ If you’re scared to go, just [go] in knowing that you have no obligation to do anything.”

The Counseling Center is currently offering several virtual support groups and workshops, including a Black student support group, a group for international students and a workshop offering breath-work and anxiety-management skills training.