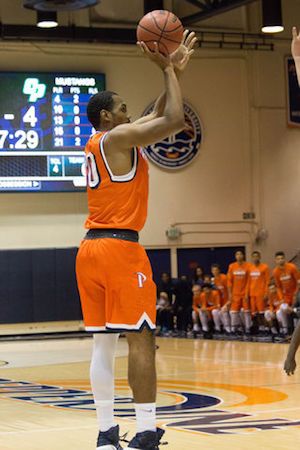 Basketball is officially back in Firestone Fieldhouse as Pepperdine defeated Cal Poly 77-68 for its season-opening victory Friday night to kick off the 2016-17 season.

Senior guard Lamond Murray Jr. led the Waves with 23 points on 10 of 20 shooting and redshirt senior forward Chris Reyes had a big night with a career-high 20 points on 10 of 11 shooting, including 14 in the first half.

“It feels great to be able to play in front of my parents finally,” Reyes said with a laugh. “We played great together in our first tune-up and as long as we play together, we’ll keep winning.”

Cal Poly led the game early on, but Murray Jr. got the offense going for the Waves, scoring seven of the first nine points to keep Pepperdine in the game. The Waves took their first lead at 13-12 following a layup by Reyes and extended the lead to as much as 15 points after taking a 10-0 run. However, Cal Poly responded with a late 7-0 run down the stretch to cut the Waves lead to eight, 39-31, entering halftime.

The Broncos came out of the half continuing the momentum, cutting the Waves lead down to four before tying the game at 51 with 11 minutes left to play. Pepperdine then answered back with a 9-0 run behind baskets by Reyes, Murray and Udenyi to take a 60-51 lead. With under three minutes left to play in the game, Cal Poly kept the game within four points before Murray hit a clutch three-point shot as part of a 10-1 run to ice the game. The Waves held on to win 77-68 over the Broncos to begin the season with an win.

Senior guards Jeremy Major and Amadi Udenyi orchestrated the offense and filled up the box score, as Major had 11 assists and Udenyi added 12 points, 7 assists and 4 steals.

“Our guys did a great job of executing both offensively and defensively,” Head Coach Marty Wilson said. “We had good ball movement and that helped us get easy baskets.”

Before the game, Wilson announced that sophomore forward Kameron Edwards suffered a fractured jaw during a team scrimmage and will be out for approximately six weeks. Edwards was expected to start this season after coming off a WCC All-Freshman selection last season.

Up next, Pepperdine will continue their three-game homestand as they host Weber State on Tuesday Nov. 15 at 7 p.m. and finish it off against Life Pacific on Thursday Nov. 17 at 7 p.m.