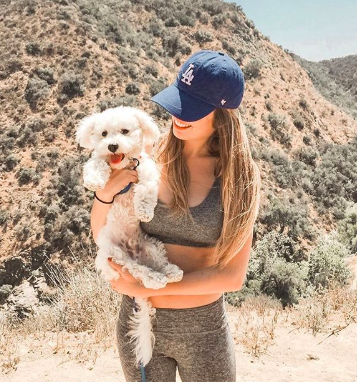 Curled up on a couch in the Pepperdine Sandbar, senior Alyssa Rabiola smiled as she said goodbye to her mother on the phone.

“My mom is definitely my biggest supporter, both in my everyday life and when it comes my cystic fibrosis,” Rabiola said. “I don’t know what I would do without her.”

At a glance, no one would be able to tell that Rabiola has a genetic disease. Her appearance shows a cheerful young lady who loves exercise and her psychology studies. But cystic fibrosis (CF) is a genetic disease that affects deep inside the lungs.

Those with CF have a defective gene that causes a thick buildup of mucus in the lungs, pancreas and other organs. This mucus clogs the airways in the lungs and traps bacteria, which leads to infections, extensive lung damage and eventually respiratory failure, according to the Cystic Fibrosis Foundation.

“I was diagnosed when I was 3-months old,” Rabiola said. “Since I was a baby, I’ve had to do breathing treatments twice a day — in the morning and at night for 20 minutes.”

A breathing treatment requires Rabiola to put on a vest connected to a backpack-sized machine; the equipment then vibrates the chest at a high frequency to loosen and thin out mucus that may build up in the lungs, Rabiola explained.

Rabiola credits her dedication to doing her breathing treatments twice a day as the reason why she has stayed healthy and out of the hospital. On the other end, the treatments have also caused her to feel ostracized

“Growing up, I sometimes felt I was the only person who had issues,” Rabiola said. “I couldn’t stay at birthday parties or sleepovers too late because I had to leave early to go do my breathing treatments … Then I was so nervous to come to Pepperdine and get a roommate. I was afraid I would disturb her with my breathing treatments, but I got really lucky.”

Rabiola (left) and Sellers (right) in the beginning of their sophomore year.

Senior Korbyn Sellers transferred to Pepperdine her sophomore year along with Rabiola, and the two were assigned as random roommates. Now close friends, Sellers said she is thankful she got to know Rabiola and her condition so intimately.

“Knowing Alyssa has been such a blessing in my life,” Sellers said. “Before I lived with her, I didn’t know anything about CF. She’s given me a lot of insight and awareness into CF as a whole. Although the circumstances, Alyssa always has a great outlook and attitude about everything.”

A major aspect of CF is the shortened lifespan. In the 1950s, it was rare for a child with CF to live long enough to attend elementary school, according to the Cystic Fibrosis Foundation. Now, the survival age is averaged at 40 years old. Rabiola said this statistic gives her both courage and fear.

“If I want to do something, I do it,” Rabiola said. “I am not going to let anything hold me back, and I’m not going to take anything for granted. But, there are times I do think about the future and think, ‘Will I even see my grandkids one day?’ For the most part, I take it day by day. I do my treatments; I take care of myself.”

Rabiola’s ambition has led her to be in the midst of applying for graduate school where she plans to continue her psychology studies. Rabiola also joined the sorority Kappa Kappa Gamma (KKG) as a way to push herself out of her comfort zone.

“Being part of an all-women organization has brought me the support I didn’t even know I could have,” Rabiola said. “Kappa has taught me leadership as well as given me friends I am so thankful for.”

Junior Alex Case is an active member of KKG and a close friend of Rabiola. Case said her friendship with Rabiola inspires her daily.

“I get to see how strong Alyssa is every day,” Case said. “Despite it all — the treatments and sickness — she has always been there for me.”

Rabiola pulls support from nonhumans, too. Her dogs Buddy and Jax have comforted Rabiola through every difficult day.

Rabiola and her dog Jax on a hike.

“Before he passed away, Buddy would sit next to me every morning and night when I did my breathing treatment,” Rabiola said. “Jax knows when I’m sick or stressed, and he’ll sit and stay with me. Growing up, it was comforting to know my dogs would love me no matter what.”

Having her dogs was an important part of Rabiola’s childhood, as CF can be a lonely disease. Those with CF are not allowed to be in close proximity — approximately six feet — of others with CF because they can transfer germs and viruses to one another, Rabiola said. Those with CF have thick, sticky mucus in their lungs that allows germs to thrive, multiply and spread, whereas those without CF do not.

“I was on a Facebook page for people with CF, but I could never face-to-face relate with someone,” Rabiola said. “My other friends were there for me, but some things are just hard to explain and have other people fully relate to.”

Through it all, Rabiola said she thanks God.

“God has given me so many other gifts and abilities that I know He wants me to use,” Rabiola said. “I think cystic fibrosis is just another little checkmark to my story that He wants me to add.” 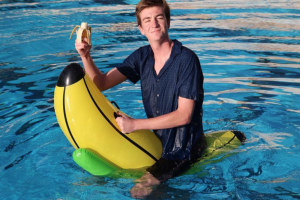 Photos by Pepperdine BananasHave you ever felt eyes on you while eating a banana around Pepperdine's campus? Well, you might...
Copyright 2013 Jupiter Premium Magazine Theme
Back to top