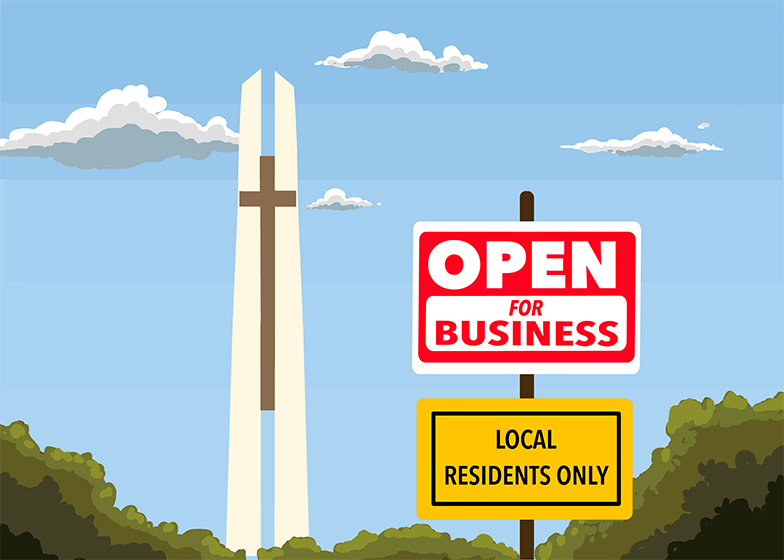 When Pepperdine’s Malibu campus reopened over a month ago, students in the area enjoyed the opportunities campus had to offer, but there are still many students who said they are frustrated about the reopening.

Given that around 53% of Pepperdine undergraduate students are from outside of California, according to the Seaver Office of Admission, many students are too far from campus to visit. All students interviewed said they believe they are disconnected or disadvantaged compared to students in the Malibu area. Some students said they are concerned about an increase in COVID-19 cases if reopening moves forward too quickly

“When the reopening news first started, and there was that first day that students could go to campus and they had free Chick-fil-A and stuff, I did have a moment of frustration,” said Lauren Kinder, a first-year from Reno, Nev., in reference to the University handing out free food to students on campus the first day it was open. “Being able to live near campus, in an apartment or something is an obvious privilege, and personally my family couldn’t afford it.”

Pepperdine has tried to include the entire community across the globe, from a virtual New Student Orientation last summer to the recent online Reel Stories Film Festival, but for some students, like Kinder, there is still trouble interacting with others.

“I don’t feel like I’m missing out on anything academically necessarily, but definitely socially compared to my friends that were able to move in,” Kinder said. “It’s just like two different worlds almost.”

First year students face unique challenges due to the Malibu campus closure, according to an article from the Graphic. With distant physical and social connection to the Malibu area and the Pepperdine community, first-years can have trouble getting a foothold on campus. The effects of the last year may extend beyond the 2020-21 academic year, Kinder said.

“I’m supposed to go abroad for all of sophomore year, so I won’t really be on campus until junior year if that works out,” Kinder said. “I also won’t know the people that I’m going abroad with at all, because I do have some friends, but they’re really only in my classes, so mostly just Biology majors.”

All students interviewed said it has been a bittersweet feeling to see campus reopen.

“Initially I was excited about it because I think in-person education is a lot better than online education,” said Aubrey Hirsch, a first-year from Elizabeth, Colo. “But since they announced it so late in the semester I probably won’t be able to go in person anyway.”

While students said they understand the University is working for the benefit of the students and most decisions are out of their control, the uncomfortable reality remains that some students are enjoying on-campus facilities and socializing while other students can’t, Kinder said.

Health and safety remain a priority for others, with students choosing to remain cautious in returning back to campus. For students like Connor McKenzie, a first-year from Newbury Park, Calif., it can be frustrating to see students not following COVID-19 precautions, he said. While the University placed restrictions and rules in place to limit outbreaks, there have still been outbreaks, such as the most recent among the Men’s Basketball and Volleyball teams.

“I don’t think they’re turning a blind eye to it because it’s not the University’s responsibility to regulate those sorts of things, like the frat parties and the things that aren’t on campus,” McKenzie said. “What the University is doing is almost facilitating it.”

McKenzie also said he thought there is some disparity in the availability of resources for fine arts students compared to athletes.

“Arts and athletics are really different obviously,” McKenzie said. “The fact that I came to Pepperdine as a Theatre Arts major to learn theater, it stings a lot to have that thrown away and to have an extracurricular like volleyball take precedence over an actual major with real classes.”

Students who are unable to live on or near campus still remain hopeful that they can visit before campus fully reopens. Kinder and Hirsch both said they would like to visit before the beginning of the fall semester.