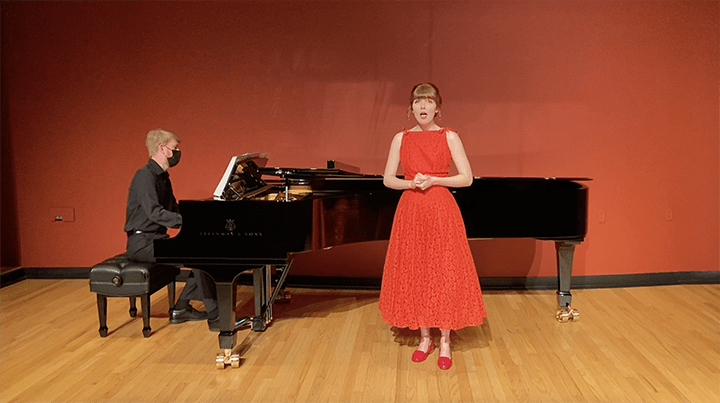 When campus partially reopened in February, the University gave Fine Arts students access to some on-campus resources. Music, Theatre and Art majors can now use practice rooms, art studios and production labs on a reservation basis.

For activities performed with a mask on, groups of up to four students can use a studio together. Anything done without a mask, like playing a wind instrument or singing, requires students to be alone, according to a Feb. 23 Public Relations email. Junior Music Performance major Kai Nakkim plays his clarinet in a practice room by himself every day.

“We have access to those now, which has kind of been a lifesaver,” Nakkim said.

As a music student, Nakkim has scheduled hours for using practice rooms. The rooms are open 8 a.m. to 5 p.m., seven days a week, but his key card only works to get in during his assigned hours.

“Hopefully we’ll be allowed access 24/7 like it usually is,” Nakkim said. “I know a lot of times, I don’t have enough time to do my school and then also come down here, given the limited hours.”

The on-campus hours are an improvement compared to the 10 a.m. to 4 p.m. hours at an off-campus site Pepperdine music students used this year. Before campus reopened, President Jim Gash allowed music students to practice in a house he owns off-campus, Nakkim said.

“They had renovated it with a front desk person to make sure everyone was socially distancing,” Nakkim said. “You’d have to schedule times in advance to go in your own room, and no one was allowed in other rooms. It was better than nothing.”

The off-campus practice rooms opened about a month before winter break, Nakkim said.

To get access to an on-campus room, Nakkim emailed Director of Choral Activities Brian Board his weekly schedule and Board shared it with the Fine Arts Department for approval.

“My experience with it has been, I show up at my two to three-hour time block depending on the day,” Nakkim said. “For example, today my keycard will work from 2 to 5 in one specific room, and it’s always been one specific room.”

Senior Theatre and Music majors Sydney DeMaria and Joe Hebel have yet to use the practice rooms, but they did record their senior vocal recital in the Raitt Recital Hall.

“It was an interesting experience,” Hebel said. “It was cool that we were able to do it in the space because for the three years leading up to our senior year I was like ‘That’s where senior recitals are. That’s where we’re gonna do our stuff,’ and then, you know, it didn’t work out like that.”

DeMaria and Hebel pushed their recital from the fall 2020 semester to spring 2021 hoping they would be able to perform in Raitt. They recorded some of their songs in Hebel’s parent’s home, but took full advantage of their time in Raitt. The duo filmed their performances with a tripod and ring light and used the recital hall’s equipment to record the audio.

“We had our dresses and he had his suit on,” DeMaria said. “It was just, it felt like a performance, even though we were just doing it for a camera.”

Because of COVID-19 restrictions, only DeMaria, Hebel and their accompanist David Fraley were allowed in the recital hall. All three of them live together, but Fraley still wore a mask during the event while DeMaria and Hebel wore masks when they were not singing.

To get permission to perform in Raitt, DeMaria and Hebel emailed the Divisional Dean of Fine Arts Bradley Griffin as soon as they saw the campus reopening announcement. They heard back a week later from Dani Lobello, the director of Production at Pepperdine’s Lisa Smith Wengler Center for the Arts.

“She said that she was going to do everything in her power to make it happen for us,” DeMaria said. “There was a series of about 20 emails back and forth trying to get us permission to use the space.”

Nakkim, DeMaria and Hebel said they all look forward to other on-campus resources opening up to them.

The orchestra, wind ensemble and small chamber groups all normally use large rooms to play together, and Nakkim said musicians might be able to use them this semester.

DeMaria and Hebel said they hope to visit Smothers Theater before they graduate.

“I’d love to just walk on the stage — that’s all I really want to do,” Hebel said. “That would be cool because I don’t know that we’ll ever perform on Smothers again, unless we’re pretty rich and famous.”