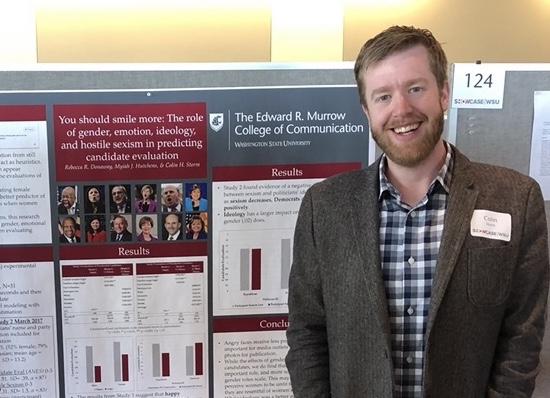 Colin Storm attends a conference at the Washington State University Research Symposium in Pullman, Washington in summer 2017. Storm was a journalist out of college before finding a passion for teaching and research, he said. Photo courtesy of Colin Storm

Finding one’s calling can be a lifelong process, but Professor of Communication Colin Storm said his time working at Pepperdine unlocked the door to his vocation.

Storm is a new tenure-track professor who sees teaching as a way to educate students while also helping them prosper personally. Storm said the culture and community at Pepperdine fulfilled his hopes for where he would work as a professor, and he is proud of the impact he and his students have on each other.

“The students here are wonderful and bright and passionate,” Storm said. “They care about their education, which is fun, and that makes it a lot easier to teach and to interact. I knew from day one this is where I wanted to be.”

Storm teaches COM 205, a course about speech and debate, and 419, which focuses on the social, cultural and political aspects of conflict and communication; he teaches COM 302, 419 and 450. Storm published research in Online Information Review that studies a communication model called Social Networking Service, and much of his research largely revolves around media in communication, he said.

Storm always thought he would be a teacher but decided to pursue journalism instead, he said. After earning his Bachelor’s degree in Journalism from Whitworth University, he began working as a local reporter for the Portland Tribune in Portland, Ore.

“I was a business beat writer, and then a sports writer,” Storm said. “I did a lot of openings of coffee shops, and I was also doing local high school sports, so Friday-night football games and stuff like that. It was certainly a fun job.”

Storm said when he stumbled into education while working with student journalists, his plans for his future changed.

“I got the opportunity to work at the local high school volunteering with their newspaper program, and I realized I liked teaching a lot,” Storm said. “So I decided to quit my job as a journalist, and I did a master’s in teaching and then did a Ph.D. program to be able to teach at the college level.”

When searching for a teaching job, Storm said working at a faith-based institution was important to him.

He said because his parents worked at a small Christian university, and he worked as a youth pastor for two years out of undergraduate school while also being a reporter, incorporating religion into his career was always front of mind.

“Faith has been a central role in my life,” Storm said. “And certainly seeing that the intersection of faith and learning was such a crucial component of my parents’ lives definitely had an impact on me.”

Storm began working at Pepperdine as an adjunct professor in fall 2019, but shortly after, classes went virtual, so most of his experience with the University has been remote. Still, Storm said the Pepperdine community welcomed him from the beginning.

After seven years as a professor, Storm said he developed a teaching style that seems to work well for both him and his students.

“One of the most common eval comments I get is that even if the topic material wasn’t their favorite, they felt like I presented it in a way with passion,” Storm said. “That helped them engage with it. So that’s — without a doubt — my teaching style.”

Being a professor to him means going beyond assigning homework and presenting lectures, he said. As someone who has struggled with anxiety and depression, Storm said being an advocate for mental health is his top priority.

“It’s my goal to try to destigmatize this and allow college students to know there’s someone else at Pepperdine — who is a professor — who goes through the same issues,” Storm said. “One in seven college students struggles with this [anxiety and depression], and so I always tell students, ‘Even if it’s not you, it could be your roommate.’”

Ultimately, Storm said he hopes students see him as a safe person and guide in any aspect of their lives.