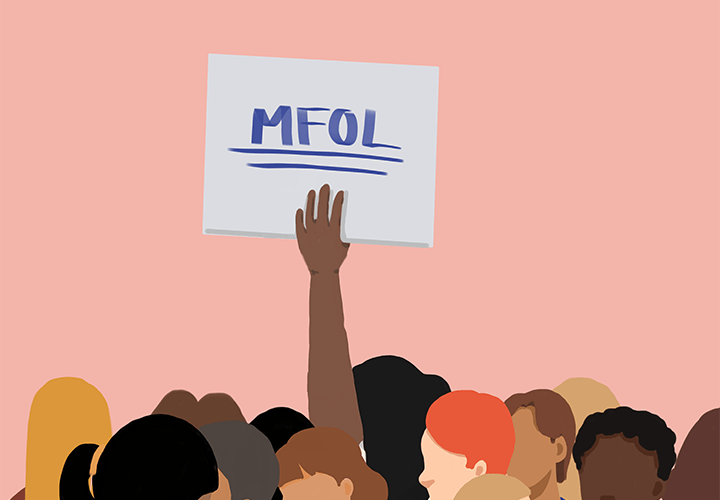 Four students established a Pepperdine March for Our Lives chapter this semester. This club unofficially began in March 2019, when those students came together for a demonstration against gun violence in the Waves Cafe after the Borderline shooting, a shooting at a nightclub close to Pepperdine that was frequented by university students. The two-year anniversary of this shooting is Nov. 7.

March for Our Lives is a national organization dedicated to raising awareness about gun violence. Parkland students founded MFOL in 2018 as a result of the school shooting at Marjory Stoneman Douglas High School. Since then, the organization has grown to encompass hundreds of chapters nationwide. Junior and President Regann Flynn, junior and Vice President Kennedy Royster, junior Jerry Calderon and junior Cairo Gainer created a chapter to continue to raise awareness about the pressing issue of gun control.

“I think if we approach the topic of gun violence in a multifaceted way and treat it in many different ways — dealing with the legal as well as the social — we’ll understand how to eradicate it,” Flynn said.

Creation Of The Chapter

Flynn is responsible for getting MFOL off the ground this year, contacting new members and finding a direction to steer the club.

Flynn said she started recruiting for her club by reaching out to members of her SAAJ colloquium and other students who attended the sit-in in March.

“One of the things that I liked about the community that I’ve surrounded myself with at Pepperdine was I knew that there were certain people and if I asked them if they wanted to join, they would either say yes or if they said no, it would be because of a scheduling conflict,” Flynn said. 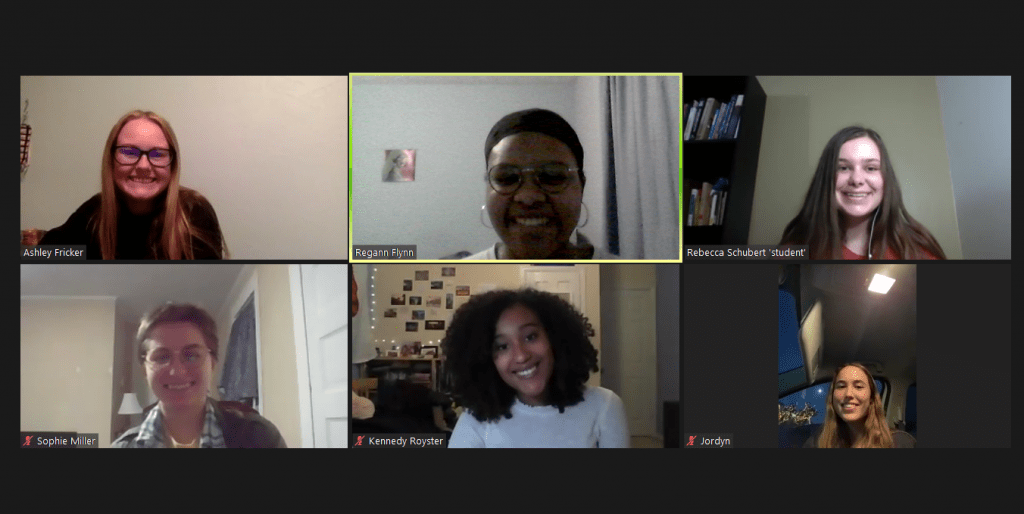 Members of Pepperdine’s March For Our Lives chapter gather for a meeting over Zoom on Oct. 28. MFOL planned on getting the word out about the organization by building up its social media presence. Photo courtesy of Regann Flynn

Members Reach Out To The Community

MFOL is made up of four committees, Flynn said. These consist of a social media, graphics, political research and outreach committee. Outreach is responsible for getting permission from administration and interacting with other clubs.

“We’ve been planning out our posts for this year, with lots of different types of information about policies to support ways that people can get involved — even safety measures and ways of coping with trauma,” Sophie Miller, junior and social media committee member said. 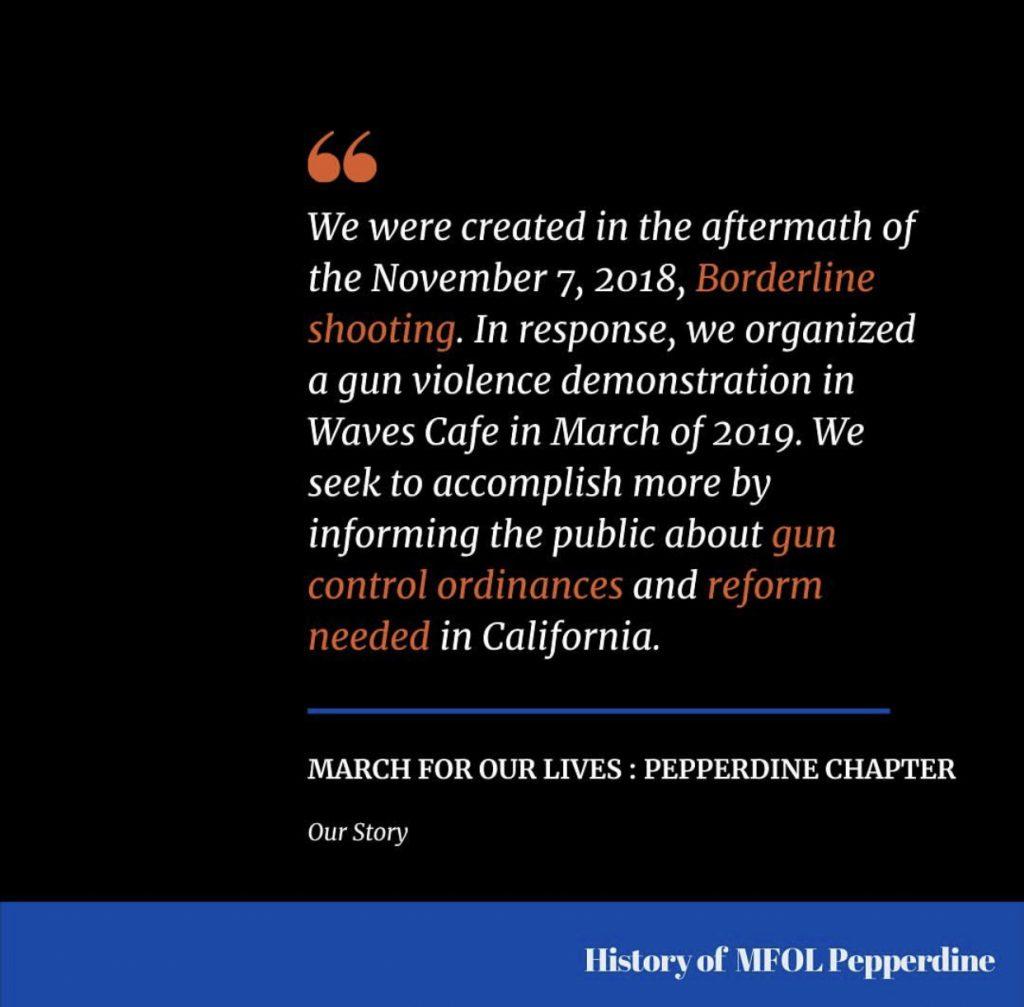 For Miller, stopping gun violence is very important. She said she hopes to encourage respectful conversation and education with social media posts.

“Part of it is because I was at the Borderline shooting back in my freshman year,” Miller said. “I already had believed that gun control was important, and that just really solidified my belief that I needed to act on it. And then, what really motivated me to join the club this year was the Black Lives Matter protests.”

MFOL holds bi-weekly meetings. Most of the meetings consist of making plans for informative social media posts, Royster said. This semester, the leaders’ main focus is to get reliable information out to the community.

The club also invites guest speakers to speak in its meetings. Last month, MFOL invited Arik Housley, the father of first-year Alaina Housley and the founder of Alaina’s Voice. Alaina Housley died in the Borderline shooting.

Royster said having Arik Housley as a guest was very inspiring. She was able to understand how gun violence affected Housley’s family. One way they’re taking action is by reaching out and compromising with far-right groups in regard to stronger gun control policies in the U.S.

Flynn said the club is working on both the legal and social aspects of increasing gun control.

“While it is important and we are very, very fervent about putting laws in place to make sure that people who shouldn’t get a gun do not get a gun, Flynn said. “We also need to just as equally and just as fervently work on dismantling those systems of white supremacy, of homophobia, transphobia and so on and so forth.”

By looking at gun violence as both a legal and social problem, Flynn said they’ll be able to increase students’ understanding of this issue. 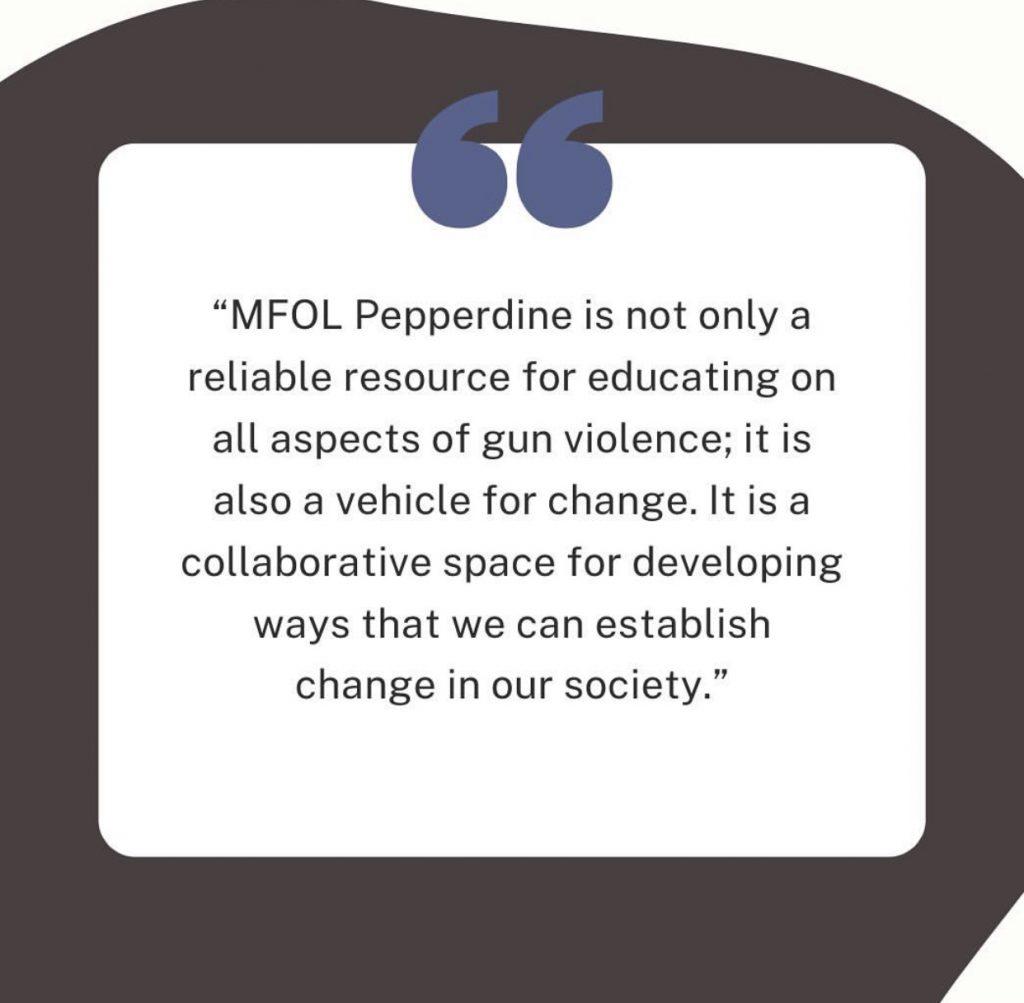 Flynn said she hopes MFOL becomes a source of education for the Pepperdine community.

“I also want to create some sort of staying presence at Pepperdine,” Flynn said. “I’m a junior so I know once I graduate and leave I hope that the club still has this much interest or public interest and it stays on campus for a very long time because it’s something that we need.”

MFOL should also be a safe space for Pepperdine students and those who want to create an end to gun violence, Flynn said.

“When you are somebody that does not meet the profile of the majority of Pepperdine students, it’s a culture shock and you try to find a place where you can belong, whether that be BSA or LSA or what have you, and you want to find that safe space,” Flynn said.

Senior and social media committee member Celeste Benitez said she wanted to join the club because she thought it would be a good opportunity to learn more about this movement.

Rebecca Schubert, junior and outreach committee member and ICC representative, is working with organizations such as Crossroads to foster intersectionality and support for BLM movements and the LGBTQ+ community.

“I just really want to make sure that I’m there to support survivors and support people impacted by gun violence — like the friends and families of victims — and really work toward helping create a community where people don’t have to live in fear,” Schubert said.

Royster personally connected to the issue of gun violence and how it relates to racial problems. Gun control is tied to minorities in the U.S. who are seen as a danger to the dominant class, Royster said. As a minority herself, Royster said she doesn’t feel safe walking around in her own neighborhood.

“It’s not just about gun violence,” said Royster. “It’s about the unity of America and how we’re targets.”

Through the creation of MFOL, club members said they are striving to connect with more people in the Pepperdine community who are willing to learn and create change in issues beyond the need for gun control.

Abroad in South Korea: Exploring the Relationship Between My American and South Korean Heritage 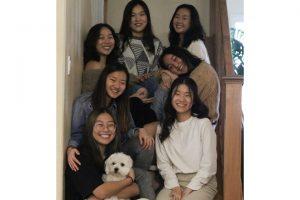 Abroad in South Korea: Exploring the Relationship Between My American and South Korean Heritage

My Korean American friends from Orange County, CA, and I pose on a staircase for a photo in December 2019. Many of my Korean...
Copyright 2013 Jupiter Premium Magazine Theme
Back to top