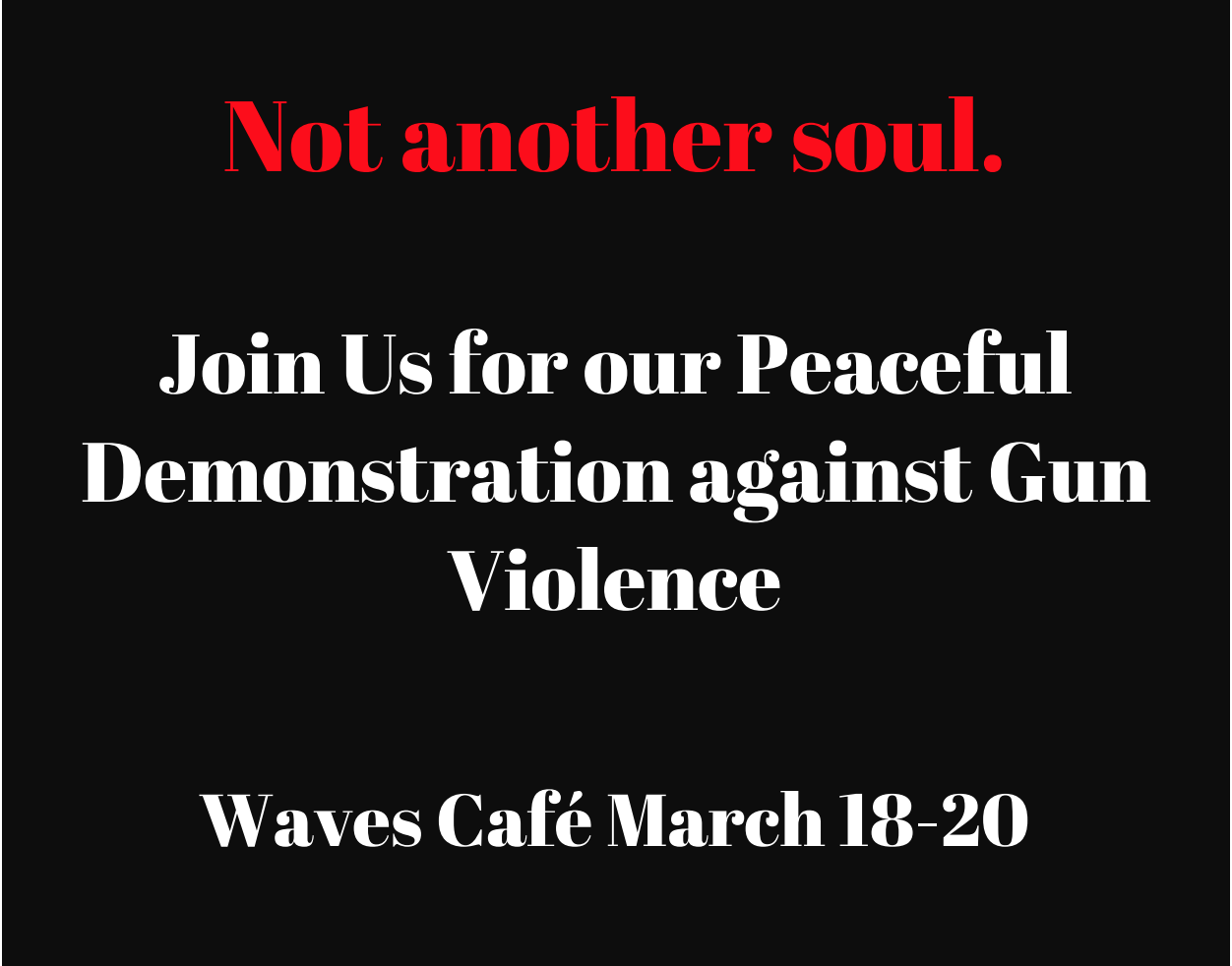 The Reformers, a Pepperdine student-led group, held a peaceful demonstration in the Malibu Campus Waves Cafe from 8 a.m. Monday, March 18, to noon Wednesday, March 20 to discuss why they support stricter gun laws in America.

Students, faculty and staff can see their posters up around campus with their slogan, “Not Another Soul,” printed in red. Junior group member Olivia Robinson said this phrase was chosen because they wanted something that everyone could acknowledge and relate to. For 36 hours, The Reformers had at least two group members in the Waves Café to talk with students, faculty and staff about gun violence and lead interactive and educational actives.

“The ‘soul’ speaks to the spiritual side of it,” Robinson said. “It’s not just another life, it’s a spiritual thing. We believe that gun violence isn’t just a political issue, it’s an issue of heart.”

Freshman group member Regan Flynn said the group formed Nov. 8, a day after Pepperdine tragically lost freshman Alaina Housley in the Borderline Shooting, in response to the pain and sorrow felt throughout campus.

“There was this initiative that we all had, where we were fed up and wanted to figure out a way to make sure this didn’t happen again,” Flynn said.

The newly formed group decided to plan a demonstration two days after the shooting, Nov. 9, in order to start a conversation at Pepperdine, Flynn said. On Nov. 9, however, Pepperdine was forced to evacuate due to the Woolsey Fire, and the demonstration was postponed.

Eventually, the group realized that the demonstration would be much more effective if they had more time to plan, Flynn said.

After reaching out to the Department of Public Safety, President Andrew K. Benton and the Chaplain’s Office, junior and liaison Heavin Hunter said she solidified the time and dates with Pepperdine administration.

Flynn said these exact dates were chosen because finals are coming up and The Reformers wanted to hold their demonstration before students began studying.

When asked about their mission, Hunter said, “my hope is for the gun violence epidemic to be eradicated.”

As a group, however, Flynn said The Reformers have many objectives: universal background checks; a federal database where those who are banned from purchasing guns are made known; completely banning assault rifles, semi automatics and bump stocks; raising the age federally to purchase a gun; and mandatory body camera use, background checks and training for police officers.

The group planned to accomplish these things by having at least two group members stationed at the demonstration in the Waves Cafe, 24-hours a day for the three-day period, Flynn said. While on-duty, group members talked with students, staff and faculty and did activities with them.

These interactive activities included signing a poster and petition, writing letters to the families of shooting victims, watching educational movies and looking at the infographics and maps, Hunter said. The group’s main goal during the demonstration, however, was to encourage students to call or text members of Senate.

At the demonstration, there was a list of every senator and his or her phone number, so students could contact their own senator in hopes of receiving a response and making their beliefs known, Flynn said.

“We want to collect as many signatures [as possible],” Hunter said. “We want the Senate to hear from Pepperdine students and faculty.”

The group is interested in contacting Senate because of H.R.8, a bill that was recently introduced to Congress that would establish new background check requirements for firearm transfers, Flynn said.

“We are trying to bring change for gun violence in regard to who has access,” Robinson said.

Freshman group member Kennedy Royster said she is extremely passionate about gun violence because her father had a run in with the police when he was younger.

“Him and his friends were pulled over and told to get out of the car,” Royster said. “I don’t want anything like that to happen to me or anybody else.”

Sadly, Royster said she contacted the senators from Texas, Maryland and California – all places where she has lived – and did not hear back from any of them.

All of the group members agreed that the response to their demonstration has been largely positive, but they are aware that there are going to be people who have different beliefs.

“We’re voicing our opinions and there are going to be people who don’t agree,” Flynn said.

Royster said she has not received any backlash from Pepperdine students.

“A lot of people came up and posted the hearts on the map and sat with us and talked with us about their experiences,” Royster said.

Her friends from her hometown in Texas, however, contacted her and were surprised that she believes in this cause, Royster said.

Freshman Jayda Gainer, who runs the social media accounts for The Reformers, said most students have been very supportive. Though, she said one student messaged the Instagram account and said “unfollow me or I am going to block you,” and then ended up blocking The Reformers.

Gainer said, like most internet trolls, these people have to remain anonymous and that is why they are not getting very much hate, other than the direct message from a Pepperdine student.

After the demonstration, The Reformers said they plan to continue to educate Pepperdine students.

“After it’s over, we are going to still try to continue our efforts and raise awareness about gun violence,” Royster said.