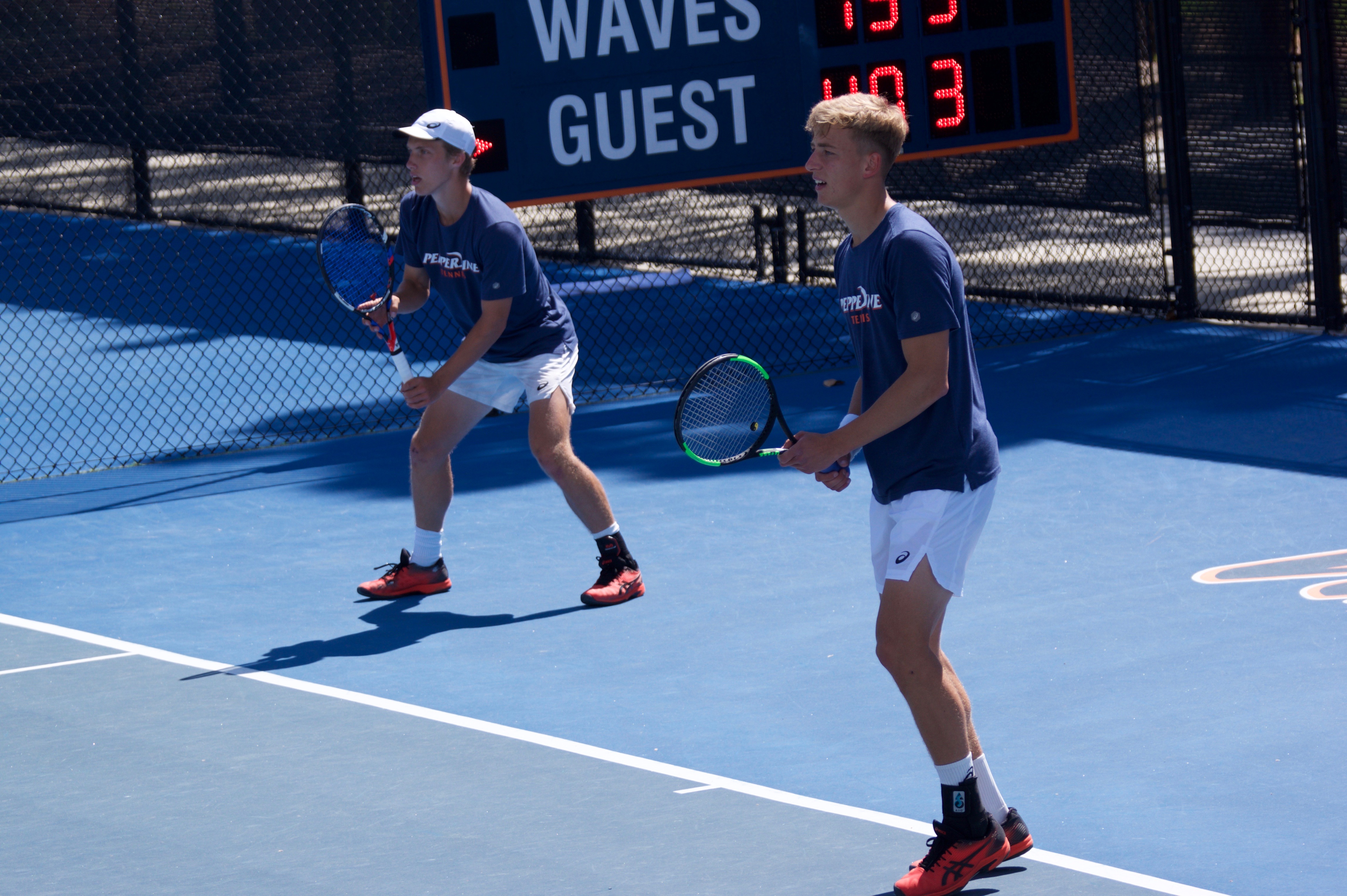 The Waves came out strong versus the Midshipmen and dominated the entire evening against the Navy team who was 15-6. It was a bounce-back loss after being swept by the University of California, Santa Barbara Gauchos on March 7. It is their first 7-0 sweep since the match versus Loyola Marymount in January 2017.

In singles play, Summaria, from Italy, wrapped up his two sets quickly against Dabek. It was his first singles victory of the season and he said he attributes it to the adjustments by Coach Adam Schaechterle.

“With coach, it’s all about energy,” Summaria said. “We all had much more today. It worked really well as we all played to our full ability.”

Summaria said his first victory is one he was looking forward to all year.

“I’ve been just waiting for this moment for so long,” Summaria said. “I’ve worked hard for it, and now I’m looking forward to taking more victories.”

Zeitvogel played Thompson in singles and he won comfortably in two sets with scores of 6-1 and 6-2. It was his fourth singles win of the regular season and he brought his record to 4-4.

Jankowiak handled his singles match versus Vagner well with scores of 6-2 and 6-3. It was also his first regular season singles victory in the eight that he has competed in.

Luque Rico continued his promising freshman campaign with his fifth singles victory of the year and only two losses. Luque Rico said he was happy to get a victory after the tough loss to UC Santa Barbara.

“I’m feeling really good after this because last week was pretty tough,” Luque Rico said. “Today we wanted that good victory at home and I’m glad a lot of people came to support us. It was a beautiful win for us and the whole match went awesome.”

Sborowitz had a close first match that he won 6-4 and pulled ahead in the second to win 6-2. His regular season singles record is now an even 4-4. He attributed his success to what is demanded from him in practice.

“What’s been so important is our practices,” Sborowitz said “We’re practicing a lot, and I love what coach has done. That’s being reflected in every match. Winning is obviously important as well but not as much as the work that we do every day.”

The closest match of the entire evening was between Oetzbach and Ton. It was the only match that required a third set to be played. Oetzbach won the first with a score of 6-2 but Ton battled back with a 6-5 victory in the second.

Oetzbach said he feels he has made a jump from the past season.

“I’ve been making a lot of changes with Coach Adam [Schaechterle],” Oetzbach said. “He wants me to play more offense and run toward the net more too. I think it’s working well too, especially because I’m coming back from a torn ligament.”

“Adrien [Oetzbach] came to Pepperdine because he wanted the challenge of playing No. 1,” Schaechterle said. “The guy he played tonight has been nationally ranked most of the year. Tonight Adrien [Oetzbach] really embraced that. We’ve had times in the season where if he gets down he might go off for 15 minutes but tonight I saw him respond and compete.”

This was the third victory by Schaechterle in his first season as the Pepperdine head coach. Schaechterle said he was pleased with his team’s performance.

“Tonight felt really good,” Schaechterle said. “This is a time in the season where the boys could really use a win. Having each individual guy do that was great and we’ve been working extremely hard to get there.”

Schaechterle also said that he knows the biggest thing his team improved on.

“I think on Friday there was a lot of frustration when we got unlucky or made errors, which happens in tennis,” Schaechterle said. “We went away from our identity. Where I saw a big step tonight was when we had some of those same situations but we collected ourselves and came back. That’s the identity we want to have.”

Pepperdine played No. 13 TCU on Saturday. The Horned Frogs were 9-3 on the season and had not lost in nearly a month. The Waves fell to the Horned Frogs 6-1, followed by another 6-1 loss to the University of Tulane Green Waves.

They continue their regular season on Saturday and will host the Loyola Marymount Lions.