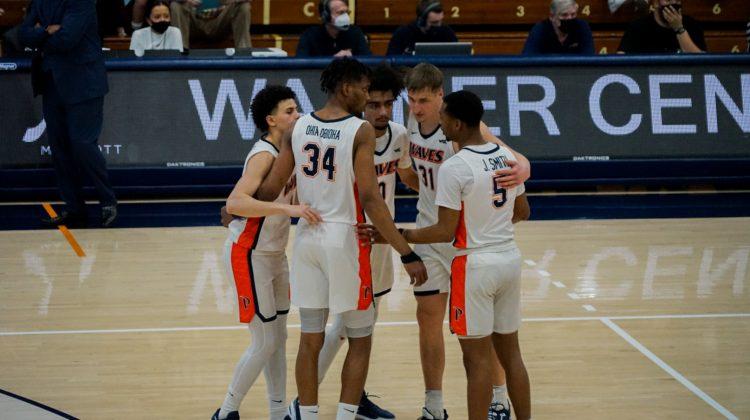 The Pepperdine Men’s Basketball team huddles together near center court, trying to rally a comeback. The team said that they need to stay together as the season continues. Photos by Gabrielle Salgado

Pepperdine Men’s Basketball (6-15) dropped their sixth straight game to the University of San Francisco (16-4) with a score of 71-45.

Freshman guard Mike Mitchell Jr. scored 11 points and dished out four assists. Freshman center Carson Basham had a career-high of 11 points on an efficient 4-of-5 shooting as well, to go along with his eight rebounds.

“Every team is good,” freshman guard Houston Mallette said. “There’s no off night. We have to compete at a high level every time. That’s the biggest thing in my opinion. We’re in a really good conference. Every team is good, every player is good but yeah, it’s been a wake-up call because we haven’t gotten a win yet. But we just gotta keep building.”

The scoring for the Waves opened with a Mitchell Jr. three from the right wing. Then, a simple give-and-go play from Mitchell Jr. and senior guard Jade’ Smith got the Waves another bucket, with the lead for USF at 11-5 with 13:03 remaining in the first half.

With the Waves’ lacking in energy, Mallette would get the bench fired up after drawing a charge on USF junior guard Gabe Stefanini.

“Leading the team in charges, I take a lot of pride in that,” Mallette said. “It’s a big play and it can provide a spark of energy, whenever we’re not hitting shots, when we’re turning the ball over and it just provide an energy. So, I just want to sacrifice for my teammates.”

Mallette’s development has not gone unnoticed from the coaching staff as a two-way player. Mallette leads the team in charges and is the team’s second leading scorer, giving his all at both ends of the court.

“He’s a very determined young man to get better and better,” Associate Head Coach Ken Bone said. “He hasn’t shot the ball extremely well every night, but we’ve always get his best effort and so he’s continuing to improve in a lot of different areas.”

The Waves would go a full five minutes without their next bucket. Mitchell Jr. and senior center Victor Ohia Obioha executed a pick and roll, which Mitchell Jr. took advantage of by nailing a long two at the top of the key.

The Dons would get a critical second chance opportunity from sophomore guard Julian Rishwain, who increased the Dons lead to 24-7.

At that point in the game, the Waves had shot 3-for-15 and had been out-rebounded 15-4 while committing six turnovers, foreshadowing the outcome of the game.

“We just gotta keep working on our execution and allow the guys who can really score to have those opportunities,” Bone said. “And some nights like the other night they’re going to put up points. We put up a lot of points at Loyola Marymount. But tonight, we struggled, and I think part of the credit will go to San Francisco after watching the video.”

After USF graduate senior forward Yauhen Massalski converted on another second-chance opportunity, an animated Mallette attempted to rally the team during the huddle, despite the score at 24-7.

“I never think the game is over. It’s just to believe and just to keep fighting, keep defending no matter what the scoreboard looks like,” Mallette said. “I know we didn’t hit shots, we had turnovers, but the main thing is that we gotta guard. We gotta defend, we gotta play defense, and we gotta trust in each other. We have to trust in each other, and I think we can do that.”

After securing two offensive rebounds, Mallette would launch a three from the “E” of the Pepperdine logo on the court. A long offensive rebound found its way to Lewis, who sank the right wing three in the fourth attempt of the possession, which got the Waves’ bench on their feet.

Off the pick-and-roll, Mitchell Jr. found a rolling Basham, who missed the dunk, but Mitchell Jr. followed the attempt and got an easy layup. But the first half would end with a midrange jumper by USF graduate student guard Jamaree Bouyea.

The Waves would cut the game to 13 at the end of the half, which would be the closest they would get in the rest of the game.

“We just need to execute under pressure,” Mitchell Jr. said. “We get rattled under pressure a little bit. Right now, we just gotta stay together. That’s it.”

The second half opened on a 13-6 run from the Dons, forcing Head Coach Lorenzo Romar to call another timeout to stop the bleeding.

A designed play from the timeout got Basham a layup on a low post play on the right block. The Waves ran the same play the next possession down, but the Dons shut down the initial option. This forced Basham to kick the ball to an open Mallette, who nailed a right corner three to make the score at 48-31 with 12:25 left in the second half.

After this, the Waves’ offensive drought would continue, as the Waves would only score 14 points the rest of the game, compared to the Dons’ 23.

The Dons lead the WCC in 3-pointers made per game at 9.7 and 3-pointers attempted at five apiece. In this game, the Dons shot 10-for-34 from three, but Rishwain nailed five of those 10 threes and hit timely buckets.

“Our plan was to take away the three because they shoot a lot of threes because they’re successful at it and try to execute our offense,” Bone said. “But tonight, we weren’t very successful.”

The offense was unable to get into the flow due to the Waves’ committing a total of 20 turnovers. The game’s largest lead came from a 3-pointer from redshirt senior guard Khalil Shabazz with 4:03 left in the second half, increasing the Dons’ lead to 32.

Although the Waves remain win-less in WCC play, the consistent message from the players and coaches is to continue to stay together.

“First and foremost, we need to stay together,” Bone said. “We need to stay together as a team and continue to build on what we already have done. But it’s been a rocky road to say the least, but we’ve been through these things before and we just gotta stick to get and play the right way.”

The Waves will have another chance to get their first WCC win versus San Diego on Thursday, Jan. 27.