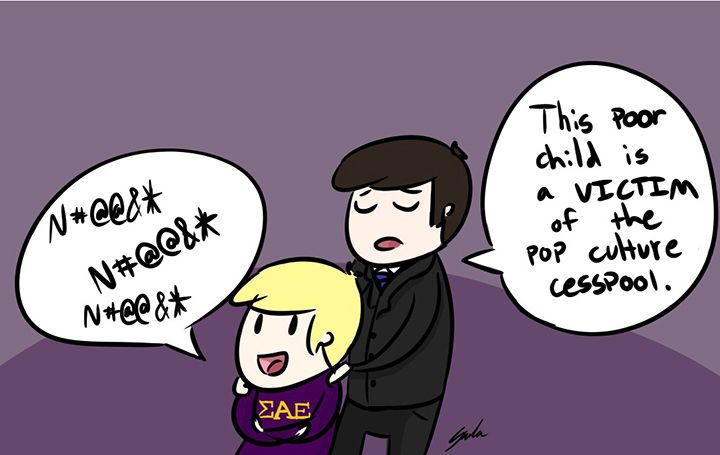 When it comes to today’s media venues — such as social media, music, movies and television — there is no such thing as privacy or artistic freedom. As a reaction, misplaced responsibility and unlimited criticism have become prevalent among people around the world.

Music and television are publicly censored based on aggressive language and content because of the widespread belief that these qualities are the driving force behind all things that negatively effect society, such as violence, prejudice, hatred and deprivation.

This belief is an excuse for others’ actions, which was seen in the recent fraternity failures of the University of Oklahoma’s Sigma Alpha Epsilon (SAE) fraternity. After pronouncing racist chants in a recorded YouTube video that later went viral, SAE has been condemned to the fullest by social media, politicians and news programs all across the country, and has had students expelled as a consequence of their racist actions, according to a March 10 article in “The Daily Beast” by Dean Obeidallah called “Racist Oklahoma Frat Founded by Racists.”

Mika Brzezinski and Joe Scarborough, hosts of MSNBC’s segment “Morning Joe,” along with special guest Bill Kristol, senior editor of the Weekly Standard, advocated for the fraternity brothers by using rap music as a defense for these individuals’ actions, according to a March 12 article from the Washington Post by Erik Wemple called “’Daily Show’s’ Jon Stewart raps ‘Morning Joe’ for reaction to racist fraternity incident.”

“Popular culture becomes a cesspool,” Kristol said. “A lot of corporations profit off it and then people are surprised that some drunk 19-year-old kids repeat what they were hearing.”

The fact is, these fraternity members aren’t repeating any song lyric they’ve heard, contrary to these expert opinions from the media. They are repeating a chant that has been passed down for years, even generations.

I’m not sure what is more frightening: the fact that these chants were recorded and spoken at all, or the fact that they are being defended by individuals who are supposed to deliver knowledge to us, the general public, in rational, well-intentioned, driven ways.

However, these arguments bring up an important stigma that is permanently tattooed on the face of artistry: Suggestive and profane media examples equate to the reasoning behind crime and societal wrongdoings. This is a dangerous stigma to society, because not only does it put the blame on a severely prominent industry, but also denies the responsibility of the actual perpetrators.

By providing an excuse for criminals and delinquents, we are taking their actions and pinning them on an industry that isn’t going to change any time soon.

I acknowledge that, withstrict reference to hip-hop music, there are numerous lines crossed that stretch the genre into the category of oftentimes offensive and distasteful. But stretching this opinion even further into the realm of social disparagement is an even bigger, more drastic jump.

The fact is hip-hop artists have a right to express themselves through whatever their medium of choice is and to whenever will listen or watch. And the more people listen to this music, the more that music gets produced.

These artists are multiplying by the masses and, as a reaction, are also becoming more diverse as it becomes easier to broadcast recordings and vocalize opinions through social media outlets such as Facebook and YouTube.

Instead of labeling these types of media and using them as crutches for the downfalls of mankind, we should be using them as sources of strength to drive other beliefs and opinions about hip-hop music in general. Whether those beliefs stand with these artists or against them, their right to publicly display what they believe through their own art should be respected.

Defending the rights of artists as expressionists is more important now than ever before. If the media want to keep their right to voice their own opinions, then they shouldn’t argue to silence those of artists they don’t agree with.