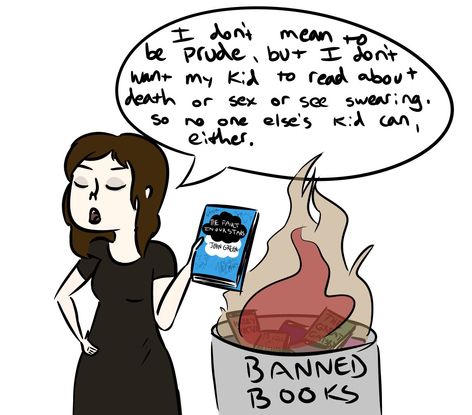 I’m just a bit obsessed with the written word. As an English major, that might be obvious.

However, even people who aren’t reading books every day for their major classes still enjoy a good book every now and then. People connect to writing in a way that can sometimes not be truly explained or understood. Authors can express loss, heartbreak, joy and experiences that others cannot express for themselves. The experiences of a single person are linked to others, and magical experiences become universal.

Yet, what happens when these words and these experiences are not allowed to be read and shared?

Banned Books Week took place Sept. 21-27. Each year during this week, people all over the world are called to celebrate the freedom to read. This might seem pointless to some, but censorship has been, and to some effect still is, a huge problem.

People hear the word “censorship” and may think of foreign countries not allowing their citizens to watch the news or keeping them in the dark about events that happen in their own backyards. When this happens, people are appalled and talk about the rights these people are being denied.

The horror of banning books should inspire this same disgust and derision when discussed. When the public is not allowed to read certain novels or essays, they are being poorly misinformed and knowledge is lost to them. The omission of knowledge is an evil and a violation of rights, equal in horror to forced propaganda. By not being exposed to certain ideas, how can a person become an educated, well-rounded member of the human race? The answer is simple: They cannot.

The idea of censorship may seem archaic to most of us, but it still happens. One such event occurred last week, ironically during Banned Books Week. Riverside county in California banned John Green’s critically acclaimed bestseller “The Fault in our Stars” due to the ideas of sex and mortality it presented, according to The Press Enterprise article ‘Fault in Our Stars’ banned from middle schools,” published Sept. 22.

Supposedly, the subject matter presented in the novel was not age-appropriate for 11 to 13-year-old kids. The book is still available in high school libraries, but it has been pulled from the middle schools in the county.

The change — or censorship as it should be rightly called — was brought to the school board’s attention by the mother of a student who brought Green’s book home to read. Because of her own ideas of what her child should or should not be exposed to, she has now taken the right to access the book from her child’s peers.

The mother, Karen Krueger, according to The Press Enterprise, said she “didn’t want to ‘come off as a prude’ or block anyone’s freedom to read,” yet she did exactly that. The fact that this mother felt the need to take a personal parenting decision and enforce it on the entire community around her is unacceptable.

Green addressed the banning of his book in a post on his Tumblr page on Sept. 25:

“I guess I am both happy and sad. I am happy because apparently young people in Riverside, Calif. will never witness or experience mortality since they won’t be reading my book, which is great for them. But I am also sad because I was really hoping I would be able to introduce the idea that human beings die to the children of Riverside, California and thereby crush their dreams of immortality.”

Green joins the ranks of fellow authors who have responded to censorship with wit and sarcasm to prove its pointlessness. These authors wrote many of the books that have shaped our society. Some of their books were once banned so the public was not allowed to read these provocative novels.

Some of these censored books include J.D. Salinger’s “The Catcher in the Rye” for undermining morality, F. Scott Fitzgerald’s “The Great Gatsby “for sexual references, Harper Lee’s “To Kill a Mockingbird” for challenging white supremacy and J.K. Rowling’s “Harry Potter” series for satanism.

Many of you probably read these novels in high school or even at your leisure. While the subject matter may be a bit uncomfortable to some, as it relates to drugs, drinking, sex and death, these books are some of the most influential books for young adults to read.

Personally, I have learned many lessons from Huck Finn, Holden Caulfield, Scout Finch and Nick Carraway. If I had been unable to read these books, I may have not learned them or done so at a less opportune moment in my life. And don’t even get me started on Harry Potter — that’s a story for another time.

Some may still be a bit confused about the idea of censorship. In this situation, I take Green’s side completely. “Okay?” “ Not okay.”